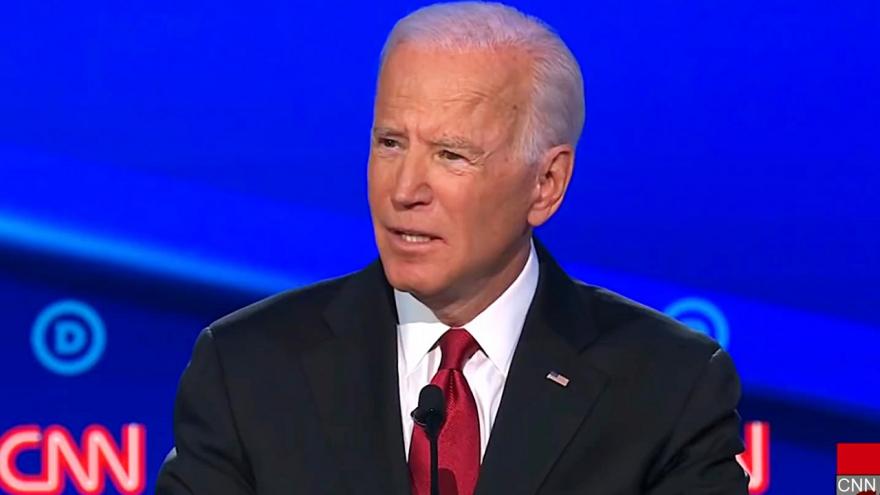 (CNN) -- Joe Biden continues to hold a lead in the race for the Democratic nomination for president and remains the candidate potential Democratic voters think has the best shot to defeat Donald Trump, according to a new CNN Poll conducted by SSRS.

Biden has the backing of about a quarter (26%) of registered voters who are Democrats or Democratic-leaning independents, with Vermont Sen. Bernie Sanders at 20%, Massachusetts Sen. Elizabeth Warren at 16%, South Bend, Indiana, Mayor Pete Buttigieg at 8% and former New York City Mayor Michael Bloomberg at 5%. Three candidates hold 3% support each in the poll: businessman Andrew Yang, and Sens. Cory Booker of New Jersey and Amy Klobuchar of Minnesota.

As 2019 comes to a close, a look back at where things were a year ago suggests two major changes have emerged in the national picture. The first is Elizabeth Warren's rise, and the second is the emergence of Pete Buttigieg as a top-level contender.

Compared with a year ago, Biden's support is just a bit lower (33% said they backed him in December 2018, 7 points better than his current backing), while Sanders' is just a bit higher (14% chose Sanders last December). Warren is the only candidate tested in both surveys to move double-digits in the last year (up 12 points from 4% a year ago). Buttigieg hadn't yet made the list of contenders, and 11 candidates tested in the survey last December have since opted out of the race, including two -- former Texas Congressman Beto O'Rouke and California Senator Kamala Harris -- who had landed in that poll's top six.

The shape of the race

Overall, the contours of the race for the Democratic nomination remain fairly similar to where they have been recently. Biden leads among non-white voters, while whites are more evenly split between Biden, Warren and Sanders, with Buttigieg not far behind. Younger potential Democratic voters continue to provide a boost to Sanders, while older ones favor Biden. Warren's strength lies in those with college degrees as she runs near even with Sanders at the top among liberals. Those who consider themselves moderate or conservative generally lean Biden's way.

The poll suggests, however, some hesitancy developing among potential Democratic voters. The share who are "very satisfied" with the field of candidates has dipped from 38% in June to 31% now. The share who say they might change their mind about the Democratic field ticks up to a majority and stands at 51% nationally. In January 2016, the closest comparative datapoint available from that cycle, 37% felt the same way.

At the same time, however, the poll finds a sharp uptick in enthusiasm among Democratic voters. Half of all registered voters now say they are extremely enthusiastic about voting for president next year, the largest in any CNN poll on enthusiasm about voting in a presidential election, which date back to 2003. Among Democrats, that figure has spiked from 46% last month to 58% now, while independents have held steady and Republican enthusiasm has climbed a more modest 7 points to 59%.

Democrats' priorities in choosing their nominee may have shifted, according to the poll. The share who say it is more important to them that the party nominate a candidate with a strong chance of beating Trump over one who shares their positions on major issues has fallen to 47%, the smallest in CNN polling on this question so far. Meanwhile, the share who offer that both electability and issues are equally important has climbed to 11%, a new high.

But separating Biden's current supporters from those backing the rest of the field suggests that in this crowded field, Biden may not have much ability to grow his support beyond the voters who already support him. Biden's supporters are near universal in their view that he has the best chance at beating Trump (88% say so). Those who aren't already in Biden's camp, though, split between Sanders (24%) and Biden (22%), with Warren slightly behind (16%) on who would have the best shot at winning against Trump. On issues, almost no one who doesn't already support Biden says he is the candidate who agrees with them most on top issues (just 3% choose him, compared with 35% for Sanders, 20% for Warren and 13% for Buttigieg).

The CNN Poll was conducted by SSRS December 12 through 15 among a random national sample of 1,005 adults reached on landlines or cellphones by a live interviewer. Results for the full sample have a margin of sampling error of plus or minus 3.7 percentage points. For results among the subset of 408 registered voters who are Democrats or Democratic-leaning independents, the error margin is plus or minus 5.8 percentage points.