CNN Poll: Public split on return to routine due to coronavirus 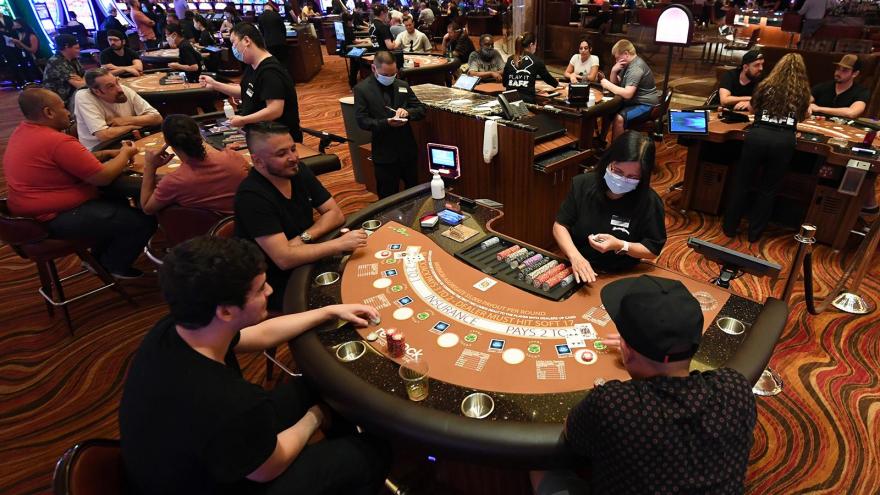 The public is split on whether or not the economy should reopen. Guests play blackjack at the Red Rock Resort after the property opened for the first time since being closed on March 17 because of the coronavirus pandemic on June 4, 2020 in Las Vegas, Nevada.

(CNN) -- People are about evenly split over whether they would be comfortable returning to their regular routines today, according to a CNN Poll conducted by SSRS nearly three months after the pandemic caused a widespread shutdown of life in America.

Those divides come even as more people report venturing out to go to work or to visit friends and family, and as the share who say they know someone who has been diagnosed with coronavirus has stabilized.

Still, those who are not comfortable venturing out now largely expect that their everyday lives will be disrupted through the end of the year. Of the 50% who say they aren't currently comfortable returning to their regular routines, 17% say they think they probably or definitely will have resumed their usual routines by the end of the year, while about twice as many, 32% say they probably or definitely will not to be back to regular life until after the turn of the new year.

Most Americans continue to disapprove of the way that President Donald Trump is handling the outbreak (56% disapprove) and Americans are evenly split over his handling of the economy (48% approve, 48% disapprove).

More say the economy is still worsening than feel it is on the upswing (36% say it's continuing to get worse, 23% say it's begun to recover), with a little over a third (36%) saying it's stabilized -- not getting worse but also not getting better. The survey was conducted almost entirely before news of a decline in the monthly unemployment rate broke on Friday.

The poll shows that public views on coronavirus, and whether the worst of the outbreak is behind us, remain divided by party and by gender. Women are far less apt than men to think the worst has passed or to see improvement in the nation's economy.

Overall, 47% of Americans say the worst of the outbreak is behind us, 46% that the worst is yet to come. Last month, a majority (52%) felt the worst was still ahead and that stood at 80% in April.

Those divisions also dominate when Americans are asked whether they are comfortable returning to their regular routine.

Although more say they are comfortable now (49%) than said so a month ago (41%), many remain deeply uncomfortable about returning to regular life.

Most Republicans (73%) and independents (53%) say they would be comfortable resuming their routines now, but only 23% of Democrats agree. Six in 10 men say they are comfortable being back to their regular daily routine (61%), while the same share of women (61%) say they are not. People of color remain less likely than whites to say they are comfortable returning to pre-coronavirus routines (51% among whites vs. 45% among people of color). Among both Latinos and blacks, however, the share who say they would feel comfortable doing so has risen double digits in the last month (up 15 points among blacks and 11 among Latinos compared with a 6-point increase among whites).

The poll shows many beginning to head back into society, though, with big increases in the share of Americans who say that in the last week they have left home to go to work or visit friends and family.

The steepest increase comes on those social calls. Half of Americans now say they left home in the last week to visit friends, family or neighbors, up 15 points since last month. And among those who have a job, 68% say they left their homes for work in the last week, up from 61% in May. A sizable share (47%) appear to be working full weeks outside of home, saying they left home to work five times or more in the past week.

The CNN Poll was conducted by SSRS June 2 through 5 among a random national sample of 1,259 adults reached on landlines or cellphones by a live interviewer. The survey also includes an oversample of black respondents for a total subsample of 362 black, non-Hispanic adults. That subset was weighted to its proper share of the overall adult population of the United States. Results for the full sample have a margin of sampling error of plus or minus 3.4 percentage points.