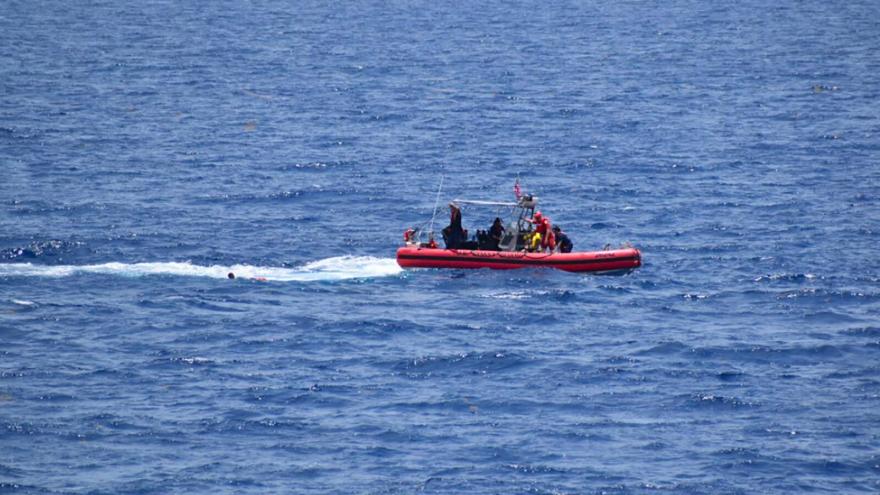 The search for 10 Cuban migrants, who were declared missing after their boat flipped over off the coast of Key West, Florida, last week has been suspended, according to the US Coast Guard (USCG).

(CNN) -- The search for 10 Cuban migrants, who were declared missing after their boat flipped over off the coast of Key West, Florida, last week has been suspended, according to the US Coast Guard (USCG).

USCG and other partner agencies, including personnel from the Navy, Air Force, Customs and Border Protection and Florida Fish and Wildlife Commission, searched for more than 123 hours and covered approximately 8,864 square miles, USCG said in news release.

"The Coast Guard, partner Department of Defense and local agency crews searched continuously the past three days to locate the missing 10 people," Capt. Adam Chamie, commander of Sector Key West, said in a statement. "The decision to suspend a search is always difficult and is made after careful consideration of all the facts. Our deepest condolences go out to the families and loved ones impacted by this tragedy."

The boat that the migrants were traveling in capsized Wednesday evening after leaving Puerto de Mariel, Cuba, the Sunday before, USCG said.

Eight other people from the boat were rescued and two bodies were recovered on Thursday, after the crew of the Coast Guard Cutter Resolute spotted several people in the water while on a routine patrol, the release said.

The USCG suspended the search at 8 p.m. Saturday.

The search included two cutters, one 45-foot response boat, four helicopters, a C-130 Hercules aircraft, and other assets, including one US Customs and Border Protection aircraft.

A dangerous journey for migrants

As Cuba's economic crisis worsens, US Coast Guard officials say they are seeing more Cubans attempting the dangerous journey to the US by boat.

While the number of Cuban migrants taking to the seas is far less than the rafters crisis of the 1990s, when thousands attempted the dangerous crossing, the increase is raising alarms.

"The Coast Guard does not recommend anyone taking to the seas in vessels that are not seaworthy. The vessels are often overloaded, the seas are unpredictable and the risk of loss of life is too great," the US Coast Guard said in an earlier statement provided to CNN.

Most Cubans caught entering the US now are returned to the island, after President Barack Obama, in his final days in office in 2017, canceled the "Wet Foot, Dry Foot" policy that allowed those who reached the country to remain.

But a worsening economic climate could push more Cubans to make the desperate voyage, despite having lost their preferential status. In 2020, the economy shrank by 11%, according to Cuban government figures, as the island's tourism industry was almost entirely shut down by the pandemic.