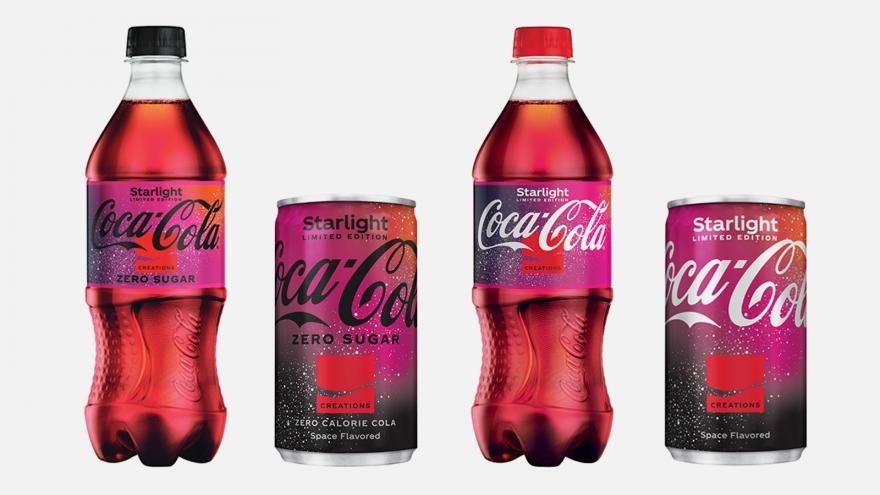 At least, that's the idea behind Coca-Cola Starlight, a new limited-edition, zero-sugar version of the classic soda.

After deciding to discontinue half of its portfolio a few years ago, getting rid of outdated but beloved drinks including Tab and Odwalla, the soda giant has been focusing on promoting its core product, Coke. Starlight is the first beverage from Coca-Cola Creations, a new innovation platform.

Unlike "cherry" or "vanilla," it's not immediately clear how "starlight" is supposed to taste. So Redditors who spotted images of the new product online a few months ago shared some theories about the new drink's flavor. Some say they spotted the mysterious new product on retailer websites ahead of the official launch, slated for next week.

One guessed raspberry, because "a quick Google search says that space tastes like raspberries." (Astronomers do think that the center of the galaxy may taste like raspberries and smell like rum, according to a 2009 Guardian article. Delicious! And not a bad idea for Coca-Cola, which is launching spikedversions of its drinks left and right.) More recently, a YouTuber who tried the product noted after-tastes of "chocolate [and] graham cracker." That led another Redditor to guess that the flavor is "s'mores."

On Thursday, Coca-Cola finally cleared up the mystery. Sort of. The company's explanation is ... well, see for yourself: Starlight is "inspired by space" has "notes reminiscent of stargazing around a campfire, as well as a cooling sensation that evokes the feeling of a cold journey to space," the company said in a release.

Also, it's red. Or in the company's words, "Coca-Cola Starlight combines great Coca-Cola taste with a dash of the unexpected, including a reddish hue."

To this reporter, after tasting a sample provided by the company, that last sentence just about sums it up. The beverage did not taste like space travel or sitting around a campfire. It did, however, taste like a sweeter version of Coca-Cola. And it is definitely red.

Last year, Coca-Cola launched a new brand platform called "Real Magic." The idea is to take a slightly different approach to marketing Coke — one that tries to reach new consumers by focusing on gaming and music, among other things. Coca-Cola Creations, which will introduce new limited-time "products and experiences across physical and digital worlds," is part of that platform.

"When we launched 'Real Magic,' we wanted to connect with and celebrate the experiences that bring joy to young people today, and that has taken us to an exciting new territory," Oana Vlad, senior director of global brand strategy at Coca-Cola, said in a statement Thursday.

For Coca-Cola, reaching young consumers is essential because interest in soft drinks has been declining for years. Exciting new campaigns and mysterious products could be a way to get potential new customers to pay attention.

So what does that entail? In the case of Starlight, it means a holographic concert by Ava Max, who has also performed in the gaming platform Roblox. The concert can be accessed via a QR code on the Starlight label. Plus, the sparkly packaging and that reddish hue.

But not everything about Starlight is new. It's also a nod to when Coca-Cola actually sent a can of Coke to space in the 1980s. But that one just tasted like Coke.