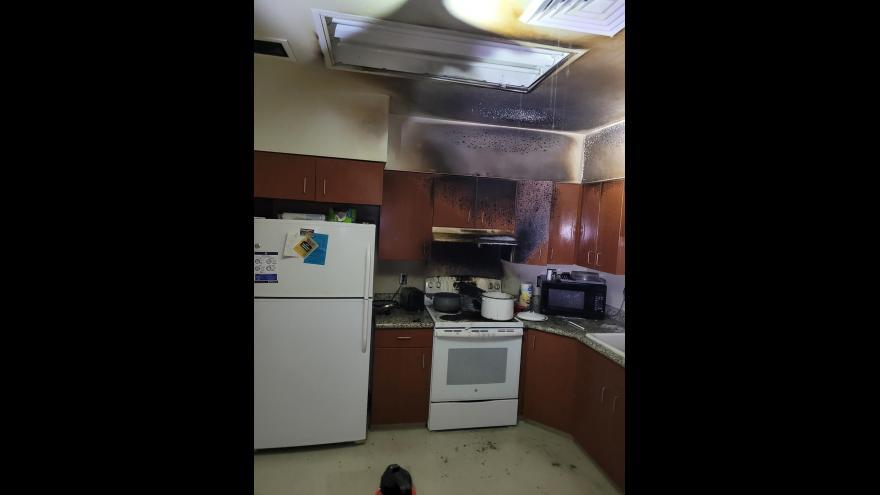 Police released this image showing the damage in the kitchen where the fire occurred.

(CNN) -- A resident at a college dorm in Utah decided to try to make rocket fuel on his kitchen stove, leading to a fireball causing serious property damage, according to police.

Now, 22 students are displaced from their dorm in Provo, Utah.

The experiment mishap occurred at the on-campus housing at Brigham Young University (BYU) Sunday afternoon. A 22-year-old male resident told police he was trying to recreate something he saw online when he decided to try to make rocket fuel, and it was not a school project.

The resident was making about five pounds of the substance when it overheated, causing a fireball to erupt in the kitchen, according to Long. Flames from the explosion engulfed the walls and ceiling around the stove triggering the fire sprinklers in the building, which flooded the main floor, according to police. Provo firefighters arrived and quickly extinguished the rest of the fire, according to police.

Thankfully, no one was injured, but it could have been a catastrophic event, Long said. He added many students were not on campus due to the holiday weekend.

"It was definitely poor judgment on this person," said Long. "He didn't think this through."

The unit where the fire occurred houses six residents, but only two were home at the time. One person was involved in the experiment gone wrong and has been interviewed by police, according to Long.

Due to the fire and water damage from the sprinklers, 22 residents have been displaced. Police are still investigating the incident and have not yet been able to determine the amount of damage to the structure and personal property.

"Please keep your experiments in the lab and supervised by trained professionals," read a Facebook post by BYU police.

At this time the resident is not facing charges, according to Long, but once the investigation is completed, it will be sent to the prosecutor to determine if charges will be filed.