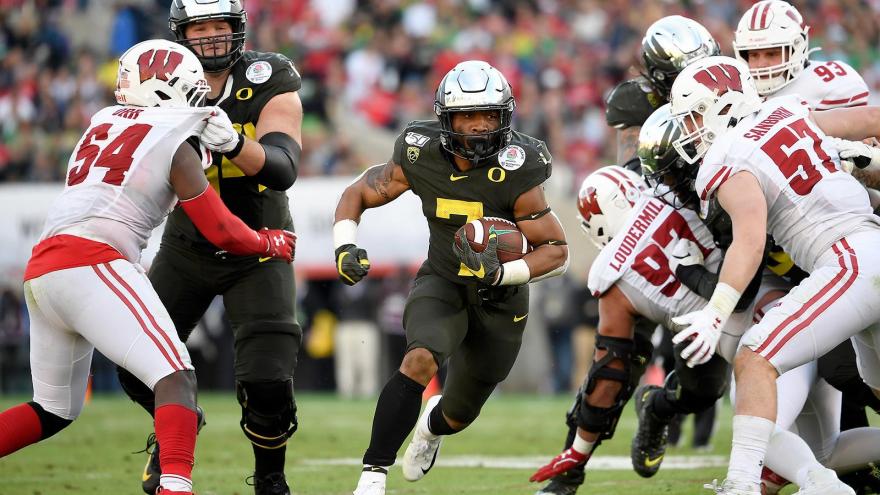 (CNN) -- Top coaches, players and President Donald Trump have weighed in on the possibility that the top five college athletic conferences will postpone the fall football season because of the coronavirus pandemic.

Leaders from college sports' "Power Five" conferences have discussed calling off the football season and other fall sports, according to reports from multiple sports news outlets including ESPN, Sports Illustrated and CBS Sports, who all cited several sources.

No decision has been reached yet, and the discussions are expected to continue over the next few days. CBS and Yahoo! Sports quoted an unnamed Big Ten spokesman as saying "No vote has been held by our presidents and chancellors."

CNN has reached out to the Big Ten for clarification but has not heard back.

President Trump tweeted his opinion Monday, saying, "The student-athletes have been working too hard for their season to be cancelled. #WeWantToPlay"

Meanwhile, some coaches are resisting the idea of not playing.

"I would say we cannot cancel the season right now," said Ohio State head football coach Ryan Day, in an interview on ESPN2. "We have to at the very least postpone it and allow us a little bit of time to keep reevaluating everything that's going on."

"We owe it to these kids to exhaust every single option we possibly can and then we go from there," Day said. "But doing that right now, to me, right now, would be abrupt."

University of Nebraska head coach Scott Frost told the media Monday the Cornhuskers might play outside the conference if the Big Ten canceled the season.

"Our university is committed to playing no matter what, no matter what that looks like and how that looks," he said. "We certainly hope it's in the Big Ten. If it isn't, I think we're prepared to look for other options."

University of Michigan head football coach Jim Harbaugh on Monday advocated for football to be played this fall, saying, "This virus can be controlled."

Harbaugh said the program's Covid-19 test results included zero positives in its last 353 tests and no positives among staff.

"We respect the challenge that the virus has presented however we will not cower from it," he said in a statement.

In a separate tweet, Lawrence said, "People are at just as much, if not more risk, if we don't play. Players will all be sent home to their own communities where social distancing is highly unlikely and medical care and expenses will be placed on the families if they were to contract covid19."

CNN has learned the Pac-12 CEO Group is set to meet Tuesday. CNN has reached out to the Pac-12 conference to verify reports of the football season cancellation.

"It's an ongoing conversation we've been having for weeks," Big 12 commissioner Bob Bowlsby told CBS Sports on Sunday night. "We talk almost every day. I'm not aware decisions have been made."

The Mountain West Conference on Monday announced the indefinite postponement of all scheduled fall sports.

The last four of 10 schools in the Colonial Athletic Association conference announced Monday they won't play because of the pandemic.

"As the national picture came into focus over the last week, it became clear that Fall competition would not be possible," James Madison Director of Athletics Jeff Bourne said in a statement.

Saturday, the Mid-American Conference called off competition. The MAC is the first conference from NCAA's top-tier Division I Football Bowl Subdivision to postpone its football season.

The discussions about calling off the football season took place in the same weekend the US crossed 5 million cases of the virus. As of Monday evening, at least 5,079,941 people have tested positive and 163,331 have died, according to data collected by Johns Hopkins University.

A source within one of the conferences tells CNN that the Power Five conference commissioners have been meeting for months to discuss the fate of fall sports and would continue to do so.

CNN has reached out to each of the Power Five conferences for more information. When asked about the situation, the NCAA advised CNN to seek comment from the individual conferences.

Aside from football, the other fall collegiate sports include men's and women's soccer, field hockey, and women's volleyball.

In mid-March, as the pandemic was building, the NCAA canceled the Division I men's and women's 2020 basketball tournaments, as well as all remaining winter and spring NCAA championships.