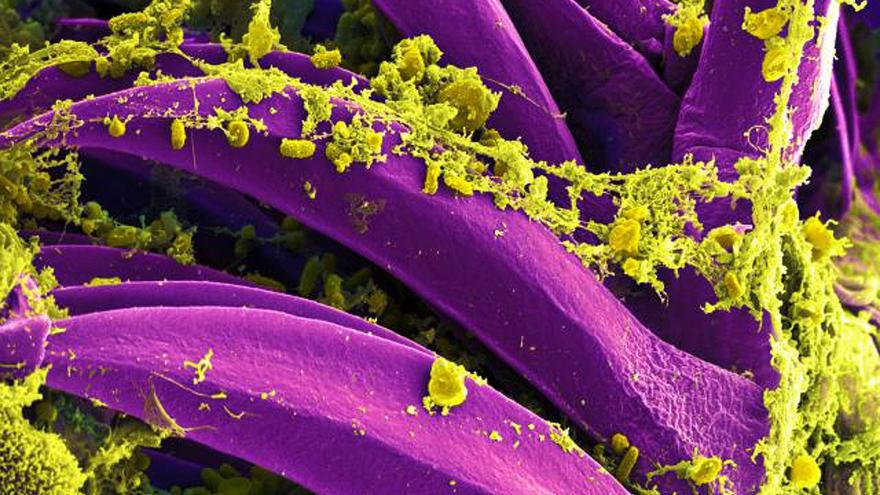 Produced by the National Institute of Allergy and Infectious Diseases (NIAID), this digitally colorized scanning electron microscopic (SEM) image depicts a number of yellow-colored, Yersinia pestis bacteria, that had gathered on the proventricular spines of a Xenopsylla cheopis flea. These spines line the interior of the proventriculus, a part of the flea\'s digestive system. The Y. pestis bacterium is the pathogen that causes bubonic plague. - National Institute of Allergy and Infectious Diseases

(CNN) -- The death of a 10-year-old in Colorado has been linked to plague as state health officials warn they are investigating reports of the bacterial infection in animals and fleas.

The 10-year-old resident of La Plata County "died from causes associated with plague," the Colorado Department of Public Health and Environment said in a news release Thursday.

The death comes amid "laboratory confirmed reports of plague in animals and fleas in six counties," including La Plata, where testing has confirmed the presence of plague in a sample of fleas collected there.

Plague is a bacterial disease that can be transmitted to humans through the bites of infected rodent fleas or handling infected animals, according to the US Centers for Disease Control and Prevention.

Though notorious as the cause of death for tens of millions across Europe during the Middle Ages, plague can be effectively treated with modern antibiotics if caught early enough, per the CDC. Just a handful of cases are reported in the US each year.

"In Colorado, we expect to have fleas test positive for plague during the summer months," Jennifer House, Deputy State Epidemiologist and Public Health Veterinarian for CDPHE, said in a statement.

"Awareness and precautions can help prevent the disease in people," House said. "While it's rare for people to contract plague, we want to make sure everyone knows the symptoms. The disease is treatable if caught early."

The symptoms include a "sudden on-set of high fever and/or swollen lymph nodes," CDPHE said, adding officials wanted residents to know the signs of plague, which is "frequently detected in rock squirrels, woodrats, and other species of ground squirrels and chipmunks."

Prairie dogs are also susceptible, and one sign of plague can be the sudden disappearance of the animal, which is active above ground.

"If you notice decreased rodent activity in an area where you normally see active rodents, contact your local public health agency," the CDPHE said.

Pets can also be infected, and CDPHE advised residents to use flea control products.