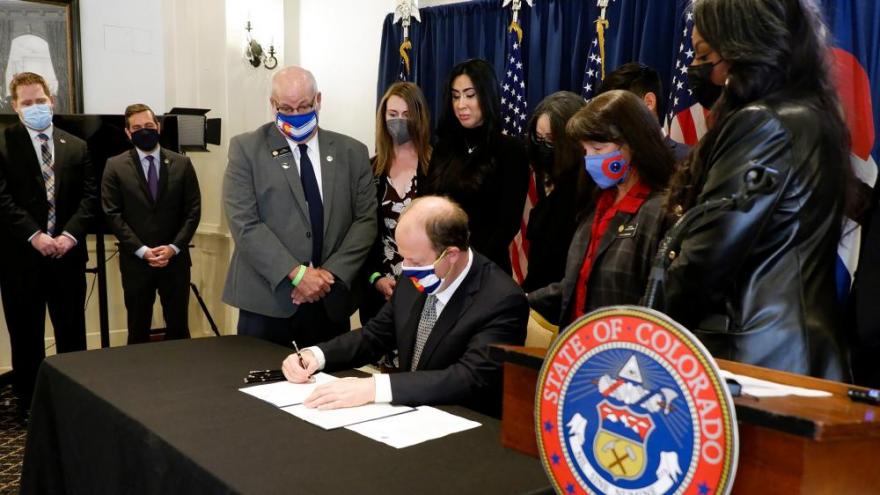 Colorado Gov. Jared Polis, signs into law a bill from the state Senate to tighten gun regulations on April 19 in Denver.

Both measures were introduced before the mass shooting occurred on March 22 at a grocery store, but the tragedy added to the public pressure and urgency to act on legislation, lawmakers have said.

Democrats, who control both the Colorado House and the Senate, passed both bills this month without Republican support in either chamber.

Senate Bill 78, renamed the Isabella Joy Thallas Act in honor of a 21-year-old woman shot and killed in Denver last summer, requires a gun owner to report their lost or stolen firearm within five days or be subject to fines. Thallas was shot and killed in June 2020 with a stolen weapon that was never reported, according to CNN affiliate KCNC.

"While of course this legislation can't bring any of our fellow Coloradoans back who are no longer with us, we know that this not only can prevent future loss of life, but can also be part of the healing for the Thallas family and so many others impacted by gun violence by a stolen gun," Polis said in remarks Monday before signing the bills.

House Bill 1106 mandates gun owners to "responsibly and securely" store their firearms when not in use to prevent juveniles and other unauthorized users from accessing them. It also requires a licensed gun dealer to provide a locking device with each firearm sale or transfer.

"This bill means fewer families losing kids to gun-related accidents and suicide, thanks to the use of $8 trigger or cable locks any family can afford. It's a simple, effective, and evidence-based solution to keep our kids safe," Democratic state Sen. Jeff Bridges, one of the bill's sponsors, said in a statement last week after the Colorado Senate's approval of the bill.

Republicans unsuccessfully tried to amend the bills to limit their scope and create exceptions in certain cases, such as for victims of assault who are unable to immediately report missing firearms.

"These bills do not serve a common-sense purpose to provide solutions to actual problems. Instead, they are just a step on a slippery slope of trying to pursue a gun control agenda rather than looking for the root causes of the issue," she said. "We presented solutions and amendments to the legislation that would have reigned in control, but Democrats refused to at every turn."

In the wake of the Boulder shooting, Democrats began discussing additional legislative proposals they believe will prevent gun violence, including mental health measures that Republicans are pushing for rather than more restrictive gun measures.

The US has been grappling with a recent series of mass shootings that have rocked communities, including the Boulder shooting and the March 16 shootings at three Atlanta-area spas. Eight people were killed at a FedEx facility in Indianapolis on Thursday, at least half dozen more mass shootings took place by the end of the weekend, and at least one person was killed at a grocery store in Long Island, New York, on Tuesday.