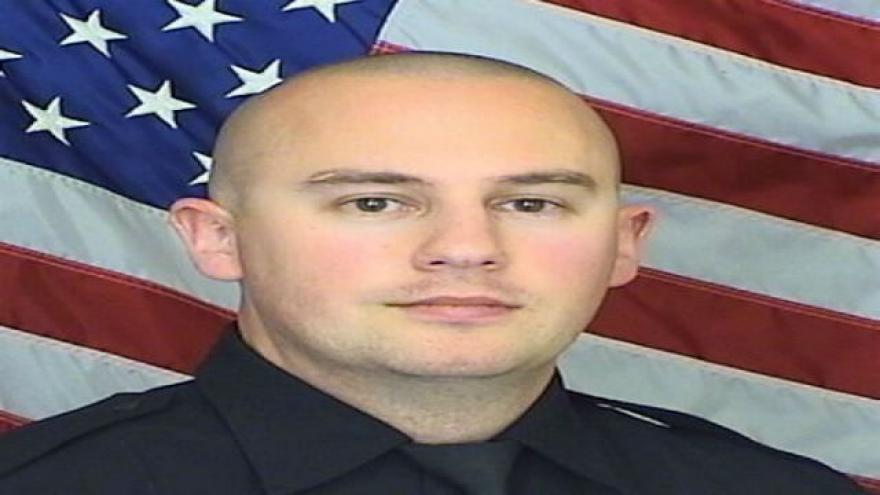 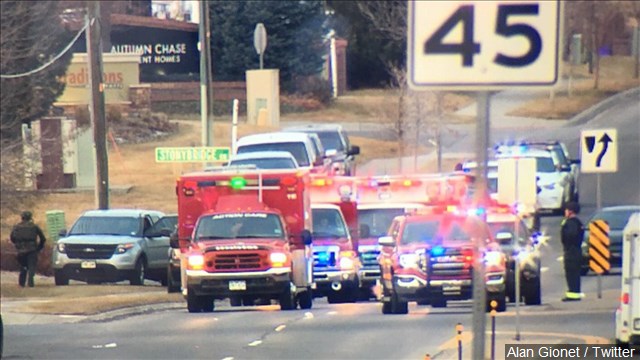 Multiple deputies were down afters shots were fired in a Denver suburb. Alan Gionet/Twitter

(CNN) -- Just weeks before a barricaded man shot and killed a sheriff's deputy in a Colorado apartment, he apparently was writing alarming messages in email and on social media that included threats to police officers, officials have said.

Matthew Riehl, a 37-year-old former Army reservist, shot four sheriff's deputies who responded to a complaint at his apartment in the Denver suburb of Highlands Ranch on Sunday morning, killing one, police say. Riehl was killed during a subsequent shootout with a police tactical team -- a clash that also left a SWAT officer injured, authorities say.

The slain deputy was Zackari Parrish, a 29-year-old father of two. Two civilians outside the apartment also were shot and injured during the incidents, police say.

That includes "harassing posts" that Riehl put on his social media sites in November about a traffic stop in the Denver suburb of Lone Tree, just a few miles east of his apartment in Highlands Ranch, said Lone Tree spokeswoman Denisse Coffman.

"At that point, the Lone Tree Police Department immediately contacted the Douglas County Sheriff's Office to investigate, given that a Lone Tree police officer was being targeted by the suspect's harassing communication," Coffman said.

Coffman said she couldn't reveal any other information about the case because the investigation wasn't finished. But these apparently weren't the only messages that recently were brought to the attention of authorities.

In late 2017, the University of Wyoming -- where Riehl was a 2010 law school graduate -- alerted students and faculty to what it called his suspicious behavior.

According to a letter sent to faculty and staff in November, Riehl posted "rambling, nonsensical messages on his Facebook page" that mentioned the school. Campus police and the Laramie Police Department were both alerted to the posts. The faculty was asked to alert authorities if Riehl was spotted on campus.

Chad Baldwin, associate vice president for communications and marketing at the university, told CNN the posts were "outrageous, vulgar and alarming." Baldwin said the university heightened security on campus, but there were no reported sightings of Riehl in the area.

Douglas County Sheriff Tony Spurlock told reporters Sunday that Riehl had previous contacts with law enforcement "throughout the metro area," but had no criminal history.

Sunday's shootings began after 5:30 a.m. at the Copper Canyon Apartments in Highlands Ranch, about 20 miles south of Denver.

It was the second time deputies had gone to the apartment Sunday. There was a noise complaint call at around 3 a.m., but when deputies got there, there was no noise. After they spoke with a roommate in the apartment, they left, the Douglas County sheriff's office said.

"One male said the suspect was acting bizarre and might be having a mental breakdown," a police news release said.

The sheriff's office said the roommate returned to the scene, gave deputies a key and said they could enter the residence. The roommate then left, police said.

"There were well over 100 rounds fired," Spurlock said, adding that the deputies "all went down within almost seconds of each other, so it was more of an ambush type of attack on our officers."

Riehl was killed about 90 minutes later during a shootout when a tactical team went into the apartment, the sheriff's office said.

Parrish, the slain deputy, was a "good kid" who was "eager to work, eager to serve," Spurlock said Sunday.

"This is a tragic day that we will be feeling for a long time," the sheriff added.

A memorial service for the fallen officer was held at a church in Littleton Monday, where Parrish's wife spoke to those who attended.

President Donald Trump tweeted his "deepest condolences to the victims of the terrible shooting in Douglas County ... and their families."

Gunman served one year in Iraq

Forster told CNN that Riehl enlisted in the Army Reserve in 2003. He spent time in Iraq in 2009 as part of a security mission during a one-year deployment with the 300th Field Artillery Regiment, according to Forster. He was honorably discharged in 2012 as an E-4 (specialist), Forster said.