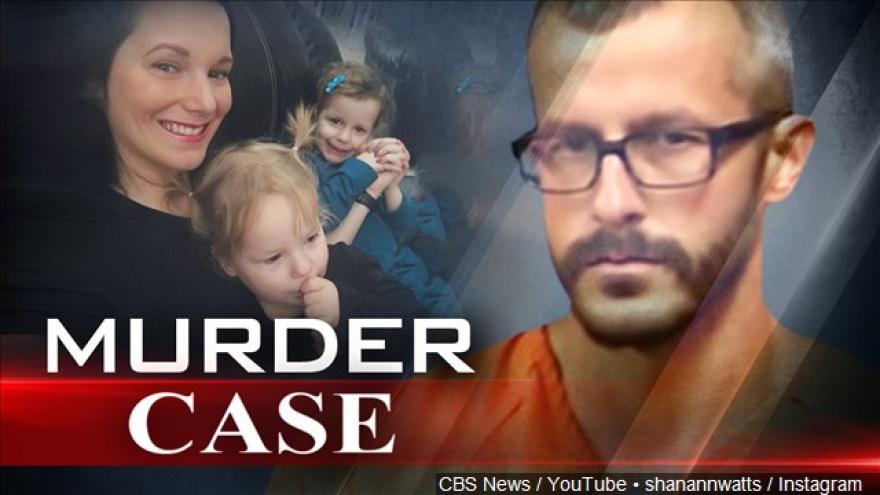 Christopher Watts pleaded guilty to killing his pregnant wife and two daughters under a plea deal that allowed him to avoid the death penality, but putting him in jail for life without parole. Photo courtesy CBS News / YouTube / shanannwatts / Instagram

GREELEY, Colo. (AP) — A Colorado man charged with killing his pregnant wife and two daughters pleaded guilty Tuesday under a plea deal allowing him to avoid the death penalty but putting him in jail for life without a chance of parole.

Christopher Watts entered his plea Tuesday during a court hearing, replying "guilty" nine times in response to Judge Marcelo Kopcow's reading of each charge against him in the deaths of Shanann Watts, 34, and their children, Bella, 4, and Celeste, 3.

Watts' voice was shaking, and he could occasionally be heard sniffing after each time he said "guilty." Her parents, Frank Rzucek and Sandra Onorati Rzucek, and her brother, Frankie Rzucek, watched from a front row of the packed courtroom.

The agreement also required Watts to plead guilty to unlawful termination of Shanann Watts' pregnancy, a felony in Colorado. Family members have said she planned to name the boy Nico.

The deal also ensures that Watts, who is 33, will consecutively serve each sentence for that charge and the murders of his wife and daughters.

"He deserves a life sentence for each and every act," Weld County District Attorney Michael Rourke said.

Rourke said he and another prosecutor visited Shanann Watts' family in North Carolina last month to discuss the odds of a death penalty sentence being carried out.

Shanann Watts' family members "were very strongly in favor of a resolution in this case short of the death penalty," Rourke said. He recalled her mother, Sandra, saying Christopher Watts "made the choice" to take the lives of his family members.

"I do not want to be in the position of making the choice to take his," Rourke said, quoting Sandra. "That's about as firmly as she could have said it to me."

The Rzucek family watched from a row of chairs, holding hands, as Rourke spoke to reporters but did not speak. Rourke said they may decide to testify when Christopher Watts is formally sentenced on Nov. 19.

Watts is represented by the Office of the Colorado State Public Defender, which does not comment on pending cases.

Watts, a former oil and gas worker, was charged in August with killing his pregnant wife and their daughters inside their home in Frederick, a community in the oil and gas fields north of Denver. Police have said Watts then drove their bodies to an oil site owned by his former employer.

The girls' bodies were found submerged in an oil tank, and Shanann Watts' body was found in a shallow grave.

Investigators claimed in the documents that Watts admitted to police that he killed his wife. But he told police that he strangled her in "a rage" when he discovered she had strangled their two daughters after he sought a separation.

Rourke said Tuesday that investigators never believed that Watts was being entirely truthful.

"The spotlight that he tried to shine on Shanann — falsely, incorrectly and frankly a flat-out lie — has been corrected," Rourke said. "The spotlight shines directly where it belongs: On him."