Colorado man who strangled pregnant wife and killed his 2 girls, sentenced to life 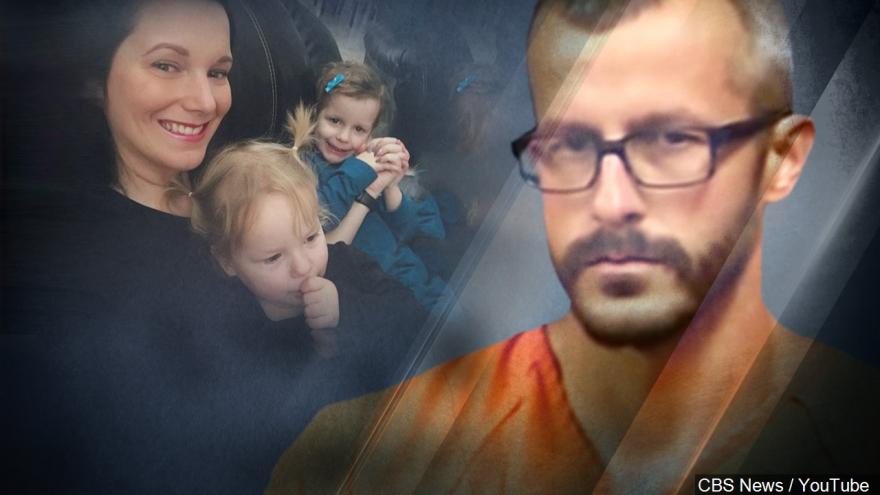 GREELEY, Colo. (AP) — A man who strangled his pregnant wife and suffocated their two young daughters wanted to escape his marriage and growing family, prosecutors said Monday as a judge imposed a sentence of life without parole as part of a plea deal that kept the killer from facing the death penalty.

Christopher Watts, who pleaded guilty two weeks ago, did not speak during the hearing. One of his attorneys said Watts was "sincerely sorry."

As Watts listened with his head down, Shanann Watts' parents detailed their ongoing struggle to understand how he could murder the three people who considered him a hero — Shanann, 34, Bella, 4, and Celeste, 3. Frank Rzucek said he was disgusted by the way his son-in-law took his wife and two daughters "out like the trash."

"Prison is too good for you," Rzucek said. "This is hard to say, but may God have mercy on your soul."

Watts, 33, was formally sentenced to consecutive life sentences for the murders. He also received a 48-year sentence for unlawful termination of a pregnancy and 12 years each for tampering with a human body.

The girls' bodies were found submerged in an oil tank on property owned by the company Watts worked for. His wife's body was found in a shallow grave nearby.

As a prosecutor detailed the injuries found on the bodies, Rzucek leaned forward, gasping. Michael Rourke said Shanann Watts was strangled, but her lack of significant injuries suggested that her death came slowly.

The girls were smothered, and Rourke said there were signs Bella "fought for her life." Celeste had no visible injuries, he said.

Christopher Watts' parents, Cindy and Ronnie Watts, were permitted to speak as the girls' grandparents. Each said they still loved their son and urged him to seek God's forgiveness.

"We love you," Cindy Watts said into a microphone before turning to look directly at her son. "And we forgive you, son."

Watts wiped away a tear with his shirt after his parents left the podium. He kept his head down for much of the hearing, speaking only once to confirm that he did not want to make a statement before Judge Marcelo Kopcow imposed his sentence.

Friends of Shanann Watts and neighbors in the subdivision where the family lived lined up inside the courthouse Monday morning. More people filed into an overflow room to watch a video stream.

Prosecutors said the images belied a hidden truth, that Christopher Watts was having an affair and making plans for a new life. Rourke said Watts talked with a real estate agent about selling the family's home, looked up secluded vacation spots and didn't seem interested in the self-help books his wife provided.

A friend asked police to check on Shanann Watts on Aug. 13 after not being able to reach her and growing concerned that the expectant mother had missed a doctor's appointment. Local police initially handled the search but soon sought support from state investigators and the FBI.

Christopher Watts spoke to local television reporters from the front porch of the family's home in Frederick, a small town on the plains north of Denver where drilling rigs and oil wells surround booming subdivisions.

He pleaded for his family's safe return, telling reporters their house felt empty without Bella and Celeste watching cartoons or running to greet him at the door.

Within days he was in custody, charged with killing his family.