Colorado officials are warning that two major wildfires could merge 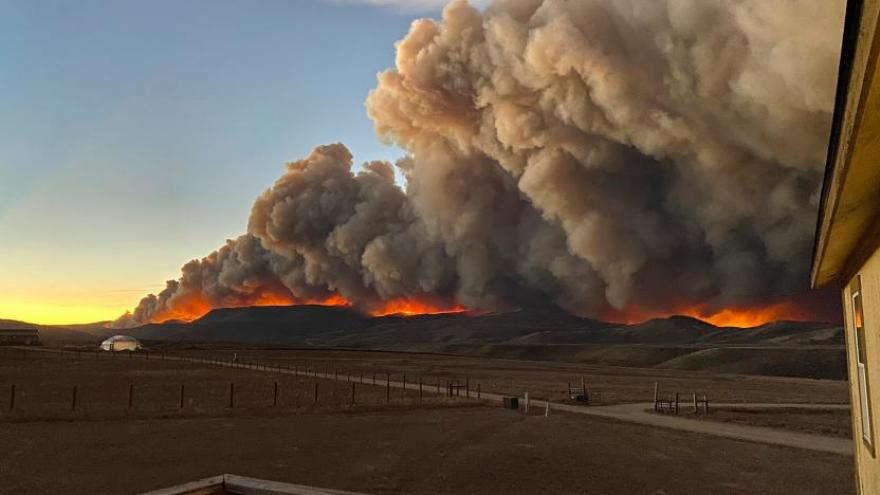 Residents in and around a gateway town to Rocky Mountain National Park evacuated and the park was closed due to the East Troublesome Fire.

The blaze started on October 14 but grew over 100,000 acres Wednesday night. The growth of the fire equates to roughly 70 football fields of forest burned every minute, according to CNN meteorologist Brandon Miller.

As of Thursday, the East Troublesome Fire had burned about 170,000 acres and was only 5% contained, fire and forest officials said.

Incident Commander Noel Livingston said Thursday afternoon the fire's growth is "really unheard of for a fire in this part of the world, in timber."

Fire officials warned on Thursday that it could merge with the Cameron Peak Fire, the state's largest wildfire on record, which is about 55% contained.

There is only about 10 to 15 miles between the two wildfires, said Stan Hilkey, the state's public safety executive director.

"We are doing everything we can to save lives and save homes," Colorado Gov. Jared Polis said in a news conference on Thursday.

The East Troublesome Fire, located near Grimes Peak in the Arapaho National Forest, had jumped the Continental Divide and was burning the upper reaches of the Rocky Mountain National Park, the National Weather Service in Boulder tweeted.

Officials in Grand County, about 65 miles west of Boulder, Colorado, issued mandatory evacuations in response to the fire, which has intensified significantly.

"#EastTroublesomeFire continues to advance towards Grand Lake. IF YOU LIVE IN THIS AREA, EVACUATE IMMEDIATELY!! Fire has been reported as close as Columbine Lake," the National Weather Service in Boulder tweeted Wednesday night.

"The fire is growing faster than we can catch it right now," Fire Incident Commander Jake Winfield said Wednesday, according to CNN affiliate KCNC.

And even though nearly 300 responders are on the front lines battling the fire, weather conditions throughout Thursday will be ideal for wildfire development. High winds that have already been fanning the flames will pick up, dry conditions will continue and temperatures will be warmer than normal.

"The longer the day progresses, the worse the conditions will get," said CNN meteorologist Michael Guy. A cold front approaching the area Thursday evening will offer little relief, Guy said, and instead will be followed by wind gusts of up to 50 mph.

But a stronger front pushing south this weekend will bring some of the coldest air this season. Snow and higher humidity are forecast, which should offer some hope for containment, he added.

Fire officials are betting on snow to get a hold of the blaze. After wind and low humidity conditions, periods of light snow over the next days could provide some relief, said Greg Hanson, a meteorologist for the National Weather Service in Boulder.

After strong winds on Saturday, a few inches of snow could fall Sunday into Monday in the foothills, and upwards of a foot of snow is expected in the high mountain valleys, Hanson said.

The fire's cause is still under investigation and officials say they hope to have the blaze contained by November 10.

The Calwood Fire, burning farther east in the state, has grown to more than 9,900 acres, officials said Wednesday. It is 24% contained. The fire destroyed at least 26 homes that had been under evacuation orders near the town of Jamestown on Saturday, officials said earlier this week.

The fires come during what has been a record-breaking fire season across the western United States, which many state leaders say was fueled by climate change. Thousands of firefighters have battled flames across the region for the past months, millions of acres have been torched and hundreds of structures destroyed.

The 61 wildfires burning across the country have scorched nearly 4 million acres, according to the National Interagency Fire Center. At least 17 of those fires are burning in California, 10 in Idaho and five in Colorado. Other states that have large active blazes include Arizona, Montana, Oregon, Washington state and Wyoming.