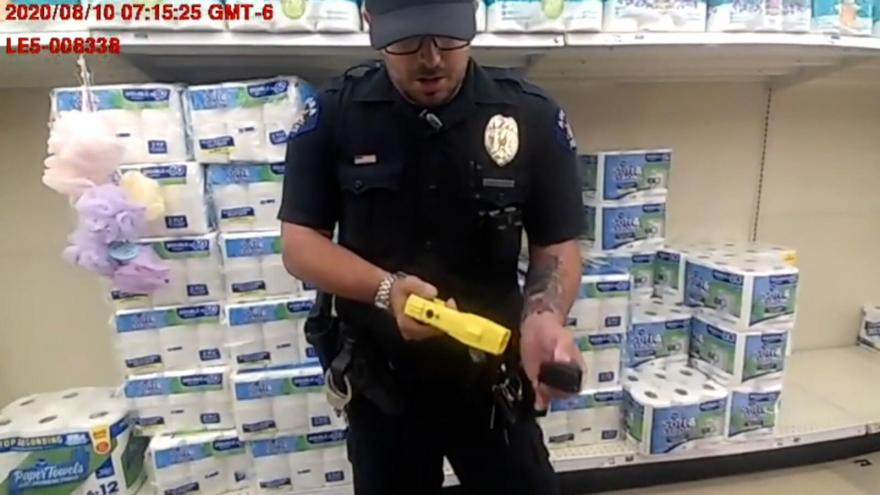 (CNN) -- An Aurora, Colorado police officer was fired on Thursday for using excessive force during an arrest last August, according to a press release from the Aurora Police Department (APD).

Officer Robert Rosen was assisting a fellow officer attempting to arrest a man allegedly trespassing in an Aurora supermarket. Rosen punched the man multiple times and used his Taser on him five times for a total of 27 seconds, according to the APD statement and body camera video of the incident obtained by CNN.

In the responding officer's body camera video, the man can be seen running away from him before being apprehended and brought to the ground. The officer then asks the man repeatedly to give him his hands and arms, but the man refuses for nearly two minutes before Rosen arrives in the supermarket aisle.

The first officer asks Rosen if he can help secure the man's arms, then Rosen can be seen punching the man in the ribs with a closed fist before deploying his Taser on him.

"During the arrest Officer Rosen never attempted any lesser means of force nor did he make any attempts to deescalate the situation in accordance with Aurora Police training," APD noted in its statement.

After securing the man's arms and placing him in handcuffs, officers brought him to his feet and walked him out of the supermarket, the body camera video shows. The man received minor injuries during the arrest and was transported to a local hospital for evaluation and treatment, according to APD.

Following the incident, Rosen's actions were reviewed by the department's Force Review Board, who recommended an internal investigation by the Internal Affairs Bureau, according to APD.

The internal investigation found that Rosen failed to activate his body camera when he arrived at the supermarket and also "failed to document his justifications for each use of force during the arrest," the department notes.

"Members of the Aurora Police Department have been working tirelessly to rebuild trust in our community and I want to thank those officers who do it right every day. The actions of Mr. Rosen were in direct contradiction of those efforts," Chief Vanessa Wilson said in the statement announcing the termination. "The poor decisions he made that day do not meet the high standards that the community and I expect from my officers."

The District Attorney's Office for the 18th Judicial District has also completed their criminal review of the incident resulting in no criminal charges being filed against Rosen.

Attempts to reach Rosen on Thursday night were unsuccessful and a call to the law firm listed as the legal representation for the Aurora Police Association was not returned.