Colorado runner chokes mountain lion to death after being attacked 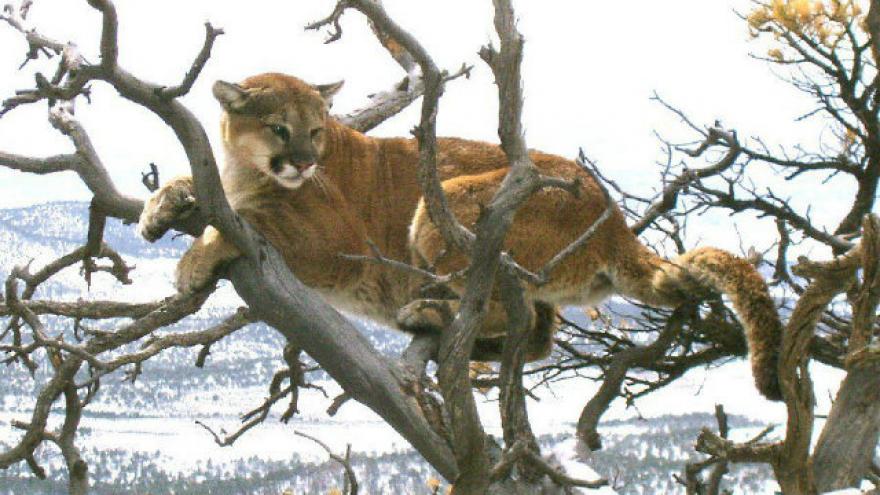 A mountain lion is seen sitting in a tree. A man running on West Ridge Trail at Horsetooth Mountain Park killed an attacking mountain lion by suffocating it Monday afternoon, according to a release from Colorado Parks and Wildlife. Photo courtesy CPW_NE / Twitter

(CNN) -- Trapped by the sharp claws and teeth of a mountain lion, a runner fought hard for his life. To break free, wildlife officials said, he choked the animal to death.

A man was running by himself Monday in the Horsetooth Mountain Open Space near Fort Collins, Colorado, when he heard something behind him. When he turned around, an 80-pound mountain lion attacked him, Colorado Parks and Wildlife officials said.

The young lion bit the runner's face and wrist but he managed to break free and kill the lion in self-defense, the agency said.

A necropsy confirmed the animal was suffocated, officials said Tuesday. The lion, which was less than a year old, tested negative for rabies, CPW tweeted.

"The runner did everything he could to save his life. In the event of a lion attack you need to do anything in your power to fight back just as this gentleman did," said Mark Leslie, Colorado Parks and Wildlife's northeast region manager.

The runner suffered serious injuries and was taken to a hospital but has since been released, officials said.

The trails at Horsetooth Mountain Open Space were closed to the public Tuesday after rangers encountered "more mountain lion activity in the area," the Larimer County Department of Natural Resources said.

Rangers will reassess the safety of the trails on Friday, the department said.

"Mountain lion attacks are not common in Colorado and it is unfortunate that the lion's hunting instincts were triggered by the runner," said Ty Petersburg, area wildlife manager for Colorado Parks and Wildlife. "This could have had a very different outcome."

Fewer than 20 people have been killed in North America by mountain lions in more than 100 years, officials said.

In Colorado, three people have been killed and 16 injured in mountain lion attacks since 1990. The lions tend to avoid humans, parks and wildlife officials said.

In a Facebook post, Colorado Gov. Jared Polis said that although the runner was able to kill the lion with his "bare hands," others should try to stay away from lions and back away slowly if it's possible.