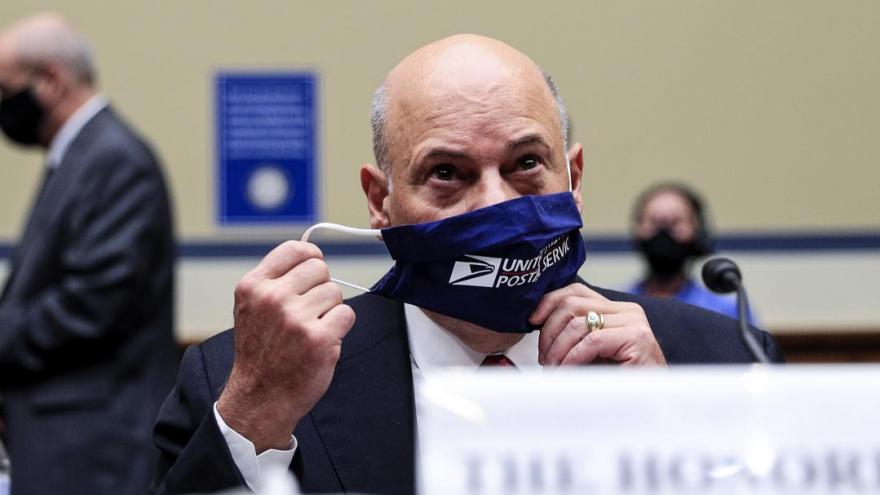 Colorado's secretary of state filed a lawsuit on Saturday against the US Postal Service, embattled Postmaster General Louis DeJoy and other USPS officials over a pre-election mailer that includes information she says will mislead voters in the state.

(CNN) -- Colorado's secretary of state filed a lawsuit on Saturday against the US Postal Service, embattled Postmaster General Louis DeJoy and other USPS officials over a pre-election mailer that includes information she says will mislead voters in the state.

The pre-election mailers, meant to inform Americans about voting by mail, advise voters to request a vote-by-mail ballot at least 15 days before Election Day and to return the official ballot at least seven days before. Those guidelines, however, don't align with Colorado's election policies.

"These false statements will confuse Colorado voters, likely causing otherwise-eligible voters to wrongly believe that they may not participate in the upcoming election. This attempt at voter suppression violates the United States Constitution and federal statutes and must be stopped immediately," the complaint from Colorado Secretary of State Jena Griswold and filed in Federal District Court states.

The lawsuit asks for a temporary restraining order to stop delivery of mailers that have yet to be delivered.

The suit adds to growing concern over election mailers ahead of November that has led some officials to levy allegations of attempted voter suppression. Some mailers from official sources and third-party groups meant to help voters with the absentee and mail-in voting process are causing confusion for voters. The USPS has been sending out mass mailers with voting information, but in states like Colorado that conduct their elections entirely by mail-in ballots, the boilerplate information is not accurate.

DeJoy also remains under fire for changes he made to USPS that have caused widespread mailing delays. His leadership has been scrutinized by Democrats who are accusing him of abusing his authority to benefit President Donald Trump's political goals.

The suit notes that Colorado "understands that some voters in limited areas of Colorado may have received this official notice, or may receive it on Saturday, September 12."

Voters in the District of Columbia -- which along with Colorado and eight states will conduct their general election by mail and will automatically send ballots to voters when they become available -- have already begun to receive the mailers.

Griswold previously asked USPS to not send the pre-election mailers to voters in her state as to not cause confusion. In a Friday tweet, Griswold also said that secretaries of state had asked DeJoy for a preview of the mailing but he refused.

"Secretaries of State asked @USPS Postmaster General DeJoy to review a draft before election information was sent to voters to ensure accuracy. But he refused. Now millions of postcards with misinformation are printed & being mailed to voters," Griswold said.

In a Saturday statement, Griswold said previous attempts to stop the USPS from sending the mailers were not successful. "My office asked USPS officials to delay or not send the mailer in Colorado, but they refused to commit to that," she said, adding that the suit is an attempt to stop misinformation.

"The importance of this election, combined with the fact it is being held amidst a national pandemic, further heightens the need to provide correct voting information to Coloradans," she said.

USPS pushed back against Griswold's claim in a response later Saturday, saying the mailers are meant to help Americans understand the overall mail-in voting process.

USPS spokesman Dave Partenheimer told CNN on Saturday that "the mail-piece -- which has already been delivered to most households and will reach every American residential mailing and P.O. Box address in the coming week -- contains a single set of simple recommendations for voters throughout the nation, regardless of where they live and where they vote."

"The main message of the mail-piece is that voters should plan ahead, educate themselves about voting options available in their jurisdiction, and, if they choose to vote by mail, to give themselves enough time to receive, complete and return their ballot," he said.

DeJoy first told lawmakers in late August that USPS had plans to "send a letter to every American" explaining "what our process is" for mail-in voting.

Elections are run by state and local governments, as outlined in the Constitution, and it's not common for the federal government to send election-related information to all Americans.