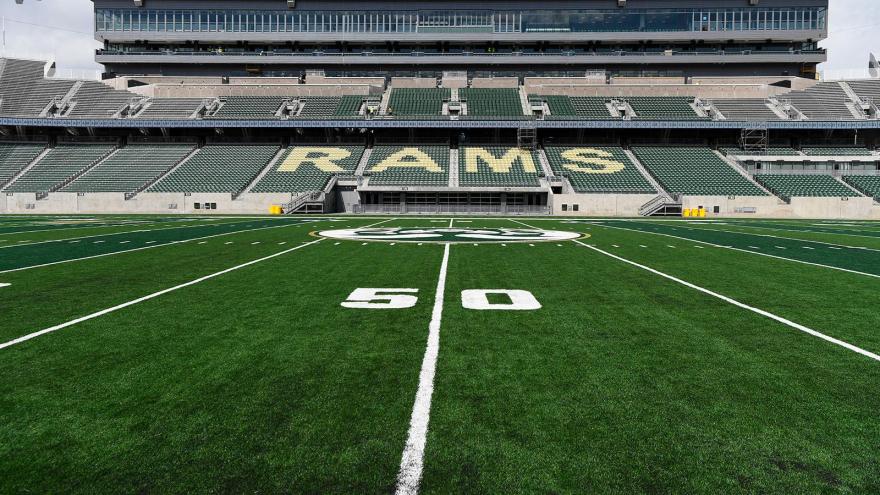 (CNN) -- Colorado State University has paused all football-related activities indefinitely, the school's director of athletics said, after learning of racism and verbal abuse allegations from within the Rams' athletic administration and in the football program.

This comes after Colorado State had announced earlier in the week that it had launched an investigation into its athletic department following a report alleging players had been told not to report Covid-19 symptoms or they would see reduced playing time.

"Today, we learned of some extremely troubling allegations of racism and verbal abuse from CSU's athletic administration generally and in the football program specifically," athletics director Joe Parker said in a statement Friday.

"Colorado State University is committed to being an anti-racist university, and we will not tolerate any behavior or climate that goes against that core value. Moreover, CSU Athletics is committed to the health and well-being of student-athletes above all other priorities, and this includes their mental health. We believe it is our responsibility to make sure that all student-athletes feel welcomed and valued as members of an inclusive athletics community."

Parker's statement said the pause includes all practices, workouts and team meetings. The statement also said that he had asked university President Joyce McConnell to expand the independent investigation announced earlier in the week to include a comprehensive review of the athletic department and football program regarding the allegations of racism and verbal abuse.

"While we have been working hard towards playing football this fall, the holistic well-being of our student-athletes is our unequivocal top priority," Parker said. "We must and will address these allegations before we focus on playing football."

On Tuesday, Colorado State announced it had begun an investigation into its athletic department following a report alleging players have been told not to report Covid-19 symptoms or they will see reduced playing time.

According to a report by the Fort Collins Coloradoan, coaches have told football players not to report coronavirus symptoms and threatened them with limited playing time if they quarantine. The report also alleges that the athletic department is changing contact tracing reports so players can continue to practice.

"The story raises concerns about whether the health and well-being of our student athletes is truly the top priority of Colorado State University," McConnell said in a statement Tuesday.

"I tell you all now that nothing is more important to me or to CSU than the health and well-being of our students. Nothing. They are our purpose and our responsibility, each and every one of them, whatever sport they play or major they declare."

The investigation is being handled by McConnell's office.

The Coloradoan report cited statements from multiple anonymous sources in the department. One current Rams football player told the paper, "I believe there is a cover-up going on at CSU ... It's not about the health and safety of the players but about just trying to make money off the players.''

Several Rams players disputed the claims in the report on social media Tuesday.

Quarterback Todd Centeio tweeted, "Coming from a player with a compromised immune system. I never once felt like @CSUFootball ever put me in jeopardy. I have felt very comfortable and safe while going through both voluntary and mandatory workouts. The allegations are not true."

Defensive lineman Toby McBride wrote in a Twitter post, "Lots of misinformation. All coaches wear masks at all times. We fill out a symptom questionnaire daily before we are allowed into the facility. They even provided us w/ masks and wash them daily. The athletes/staffers that complained are the same ones not following protocol."

And defensive lineman Scott Patchan tweeted, "Name the sources. Cause when I was sick I was urged to call the trainer right away lol. And we have a team meeting every morning stressing the importance of doing the right things. So I'm calling bs."

Head football coach Steve Addazio, who was hired in December after spending seven seasons at Boston College, said in a statement Tuesday, "The health and welfare of our student-athletes on the Colorado State football team is our top priority, and I fully support President McConnell's investigation into concerns about whether these protocols were properly followed by everyone involved with our program.

"We want every student-athlete to have confidence that we are taking every possible measure to ensure their safety, and we will continue working with the training staff, the athletic department and the University to evaluate and implement any additional steps necessary to live up to our high standards."

Colorado State is scheduled to open its season at home on September 19 against Northern Colorado.