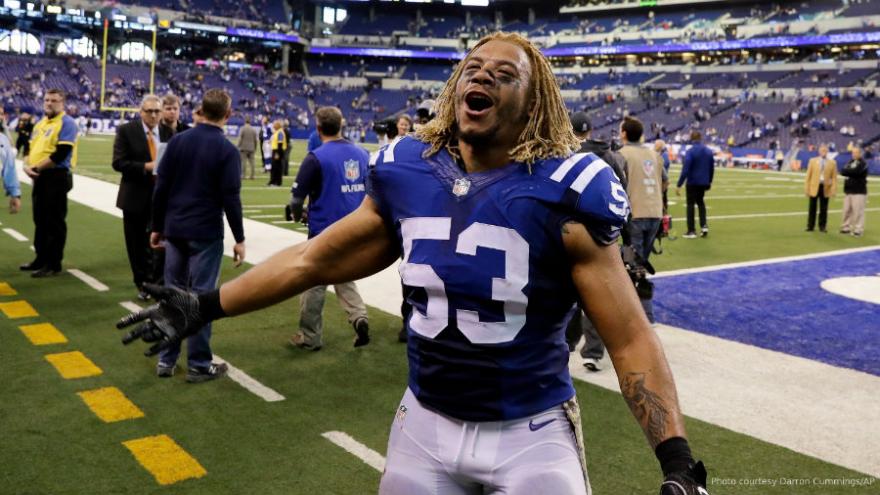 (CNN) -- The driver suspected of hitting and killing NFL linebacker Edwin Jackson and his ride-share driver on Sunday had a prior conviction for driving under the influence and had twice been deported, according to US Immigration and Customs Enforcement.

Indiana State Police identified the suspected driver as Manuel Orrego-Savala, 37, an undocumented immigrant who is a Guatemalan citizen. Police said he gave them an alias at the scene -- Alex Cabrera Gonsales -- and attempted to flee on foot.

Orrego-Savala was taken to the Marion County Jail, accused of driving without a license and on suspicion of intoxicated driving.

He was briefly in court on Tuesday for an "advisement of rights" appearance ahead of his initial hearing, which will be held on Wednesday in Marion County Circuit Court.

When Ortega-Savala appeared before the judge he was assisted by an interpreter. He questioned why he was in court, as he claimed he wasn't driving the car in the fatal crash that killed the two men, according to the court clerk.

Orrego-Savala does not currently have an attorney, but one will be appointed before Wednesday morning's initial hearing.

Jackson, 26, was a linebacker with the Indianapolis Colts and was a passenger in the ride-share vehicle. Jeffrey Monroe, 54, of Avon, Indiana, was the ride-share driver who also was killed in the crash around 4 a.m. Sunday.

Indianapolis Colts owner Jim Irsay will pay for the funerals of Jackson and Monroe, a team spokesperson confirmed to CNN.

President Donald Trump referenced Orrego-Savala's immigration status in a tweet Tuesday morning, saying it was "disgraceful that a person illegally in our country" killed Jackson. He also called on Democrats to "get tough on the Border, and with illegal immigration, FAST!"

Indiana State Police said Monday they are working with the prosecutor's office to file criminal charges in Orrego-Savala's case.

Orrego-Savala was deported in 2007 and 2009, according to ICE. He had entered the US illegally in July 2004 and he was convicted of driving under the influence in Redwood City, California, in 2005, ICE said.

"Additionally, he has many other misdemeanor criminal convictions and arrests in California and Indiana," the statement from ICE said.

As part of his call for tighter immigration policy, Trump has repeatedly highlighted suspected crimes in which the suspect is an undocumented immigrant. On the campaign trail, he spoke often about the 2015 killing of Kate Steinle, a 32-year-old in San Francisco, allegedly by a man who had been deported five times previously. The man, Jose Ines Garcia Zarate, was found not guilty of murder in the case.

Before the crash on Sunday morning, Monroe had pulled his 2018 Lincoln to the side of Interstate 70 in Indianapolis because Jackson had become ill, according to state police. Monroe was believed to have stepped out of the car to help Jackson, police said.

Both men were standing outside the car when a black Ford F-150 pickup truck drove onto the emergency shoulder and struck them and the back of the car. One of the men was thrown into the center lane. A state trooper spotted the wreckage and as he slowed to stop for the crash, he struck the body in the center lane, officials said.

Both men were pronounced dead at the scene by the Marion County coroner's office.

Police said Orrego-Savala was the driver of the F-150. ICE said it has placed an immigration detainer on Orrego-Savala at the Marion County Jail.

After being pulled over for failing to stop at a stop sign, he told police he did not have a driver's license but had a Mexico ID card, according to the police report. Cabrera Gonsales was arrested and accused of operating a vehicle while never receiving a license, and was handcuffed and taken to Boone County Jail for further processing.

Scott Rolston of Whitestown Police said the department generally would not communicate with ICE for a typical traffic stop.

"After an arrest, a suspect would be brought to the Boone County Jail, where they would be fingerprinted, processed, and if ICE were to be engaged it would be at that part of the process," Rolston said.

Cabrera Gonsales pleaded guilty to operating a vehicle while never receiving a license, which is a misdemeanor, according to documents provided by CNN affiliate WISH-TV. He was sentenced to two days in the Boone County Jail and was released after one day served, according to the court documents.

Jackson was from Atlanta but made a home for himself with the Colts. The inside linebacker started eight games in 2016 for the Colts but did not play this past season due to an injury.

"Edwin was loved by all in the Colts organization," the team said. "We admired his outgoing personality, competitive spirit and hardworking mentality. He was well-respected among all with whom he crossed paths, and he will be greatly missed in our locker room and throughout our entire organization."

Jackson was an undrafted free agent out of Georgia Southern in 2015. The team's head football coach, Chad Lunsford, said in a statement that Jackson represented "how a young man should live his life. He earned everything that he was given and left this world way too soon."