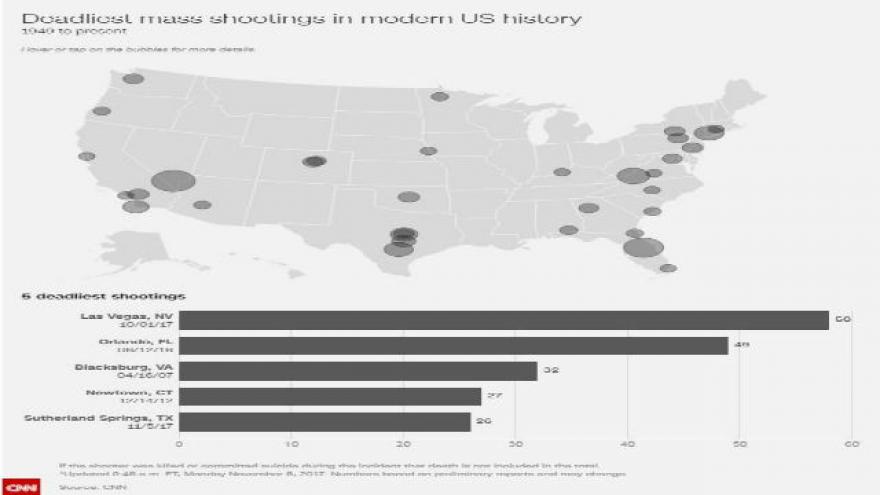 1949 to present. If a shooter was killed or committed suicide during the incident, that death is not included in the total. Photo courtesy CNN

(CNN) -- After Columbine, it was hard to imagine things getting much worse.

At the time, the shooting at a Colorado high school was the deadliest school attack in US history. But then came Virginia Tech, and Sandy Hook.

With 13 victims dead, it was also one of the deadliest shootings overall. But then came San Bernardino, Orlando, Las Vegas and Sutherland Springs.

In the 18 years since Columbine rocked America to its core, the country has seen so many more mass shootings that the attack isn't even among the 10 deadliest mass shootings in modern US history.

Three of the five deadliest shootings have occurred in just the last year and a half.

Below is a list of the 10 deadliest single-day mass shootings in modern US history. If the shooter was killed or died by suicide during the incident, that death is not included in the total.

October 1, 2017 - A gunman, identified as 64-year-old Stephen Paddock, fires from the 32nd floor of the Mandalay Bay Resort and Casino on a crowd of more than 20,000 gathered on the Las Vegas Strip for the Route 91 Harvest Music Festival. He kills 58 people and injures more than 500. Police believe the gunman then kills himself. It is the deadliest mass shooting in modern US history.

June 12, 2016 - Omar Saddiqui Mateen, 29, opens fire inside Pulse, a gay nightclub, in Orlando. At least 49 people are killed and more than 50 are injured. Police shoot and kill Mateen during an operation to free hostages officials say he was holding at the club.

April 16, 2007 - Student Seung-Hui Cho, 23, goes on a shooting spree, killing 32 people in two locations and wounding an undetermined number of others on the campus of Virginia Tech in Blacksburg. The shooter dies by suicide.

December 14, 2012 - Adam Lanza, 20, guns down 20 children, ages 6 and 7, and six adults at Sandy Hook Elementary School in Newtown, Connecticut, before turning the gun on himself. Investigators later find the shooter's mother, Nancy Lanza, dead from a gunshot wound.

November 5, 2017 - A man walks into a small church in a rural Texas town and guns down 26 people. The shooter, identified by two law enforcement sources as Devin Patrick Kelley, is found dead after a brief chase, but it's unclear if he is killed or takes his own life. It is the deadliest mass shooting in Texas history.

October 16, 1991 - In Killeen, Texas, 35-year-old George Hennard crashes his pickup truck through the wall of a Luby's Cafeteria. After exiting the truck, Hennard shoots and kills 23 people. He then takes his own life.

July 18, 1984 - In San Ysidro, California, 41-year-old James Huberty, armed with a long-barreled Uzi, a pump-action shotgun and a handgun, shoots and kills 21 adults and children at a McDonald's. A police sharpshooter kills Huberty one hour after the rampage begins.

August 1, 1966 - Charles Joseph Whitman, a former US Marine, kills 16 and wounds at least 30 while shooting from a tower at the University of Texas at Austin. Police officers Ramiro Martinez and Houston McCoy shoot and kill Whitman in the tower. Whitman had killed his mother and wife earlier in the day.

December 2, 2015 - Married couple Syed Rizwan Farook and Tashfeen Malik open fire on an employee gathering taking place at Inland Regional Center in San Bernardino, killing 14 people. They are killed in a shootout with police later in the day.

August 20, 1986 - In Edmond, Oklahoma, part-time mail carrier Patrick Henry Sherrill, armed with three handguns, kills 14 postal workers in 10 minutes and then takes his own life with a bullet to the head.

April 20, 1999 - Eric Harris, 18, and 17-year-old Dylan Klebold kill 12 fellow students and one teacher at their high school in Littleton, Colorado. The pair then committed suicide in the school library.