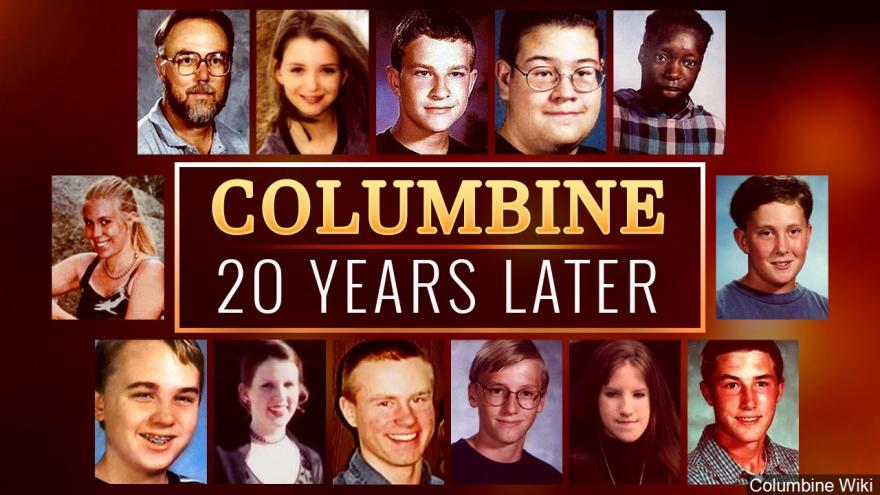 (CNN) -- Nearly 20 years after the mass shooting at Columbine High School captured the nation's attention, some of the school's current students are using its legacy to combat gun violence.

Their campaign, #MyLastShot, asks students to put a sticker on their ID or cellphone that indicates their desire for images of their body to be publicized and shared if they are killed as a result of gun violence.

"Our country has a history of photography effecting real change," the campaign's founder, 17-year-old Kaylee Tyner, told CNN in a phone interview Saturday.

Tyner said she was inspired by Emmett Till's death, his legacy and how that was connected to the painful imagery of his body.

"His parents insisted the world see the imagery of his death," she said, adding that the image "exposed the racial divide in our country and helped usher in the civil rights movement."

The campaign encourages advocates to print off and sign the sticker, which reads, "In the event that I die from gun violence please publicize the photo of my death. #MyLastShot."

The hope is that even in death they can be the catalyst for change, using the power of photography to bring attention to the scourge of gun violence.

Tyner and her peers hadn't even been born at the time of the Columbine shooting, which claimed 13 lives and thrust Littleton, Colorado, and the surrounding community into the national spotlight.

But that doesn't mean it hasn't had a profound impact on them.

Today, she said, Columbine High School is "as normal as you can make a high school that has gone through a shooting," but there are a few things that are atypical.

"People think the school is a tourist attraction," she said. "There's also a lot of security at the school."

Tyner said growing up in Littleton meant living with a small idea in the back of her head: "an understanding that a school shooting was a possibility."

It was that experience, coupled with the 2012 movie theater shooting in nearby Aurora, that brought Tyner to a realization.

"That's when it hit me: This can happen to anyone, at anytime," she said. "Columbine is just one of the many."

Tyner was also impacted by images and footage that came out of the shooting at Marjory Stoneman Douglas High School in Parkland, Florida, last year, she said.

"Those videos were just so horrific and so real," Tyner told CNN. "I remember seeing people on Twitter saying it was so horrible ... but what I was thinking was, no, that's the reality of a mass shooting."

Parkland survivor and gun violence activist David Hogg posted a picture to Twitter on Friday showing the back of his driver's license, which bore the #MyLastShot sticker.

Tyner said there's no "rulebook" for how #MyLastShot would play out in reality. She envisions the images traveling through social media, and not news outlets.

But she said she knows that if she were killed, she'd need her parents to see her wish through and let others know how she felt. So she enlisted their help.

They were shocked at first, she said, and the idea "makes them uncomfortable, but that's how it should be."

"It's hard for them to think about their own child dying, but the reality is that gun violence has such a large impact on the community and (is) such a large threat. It's a conversation that needs to be had."

And that's what Tyner says is important.

"It's about bringing awareness to the actual violence," she said, "and to start conversations."