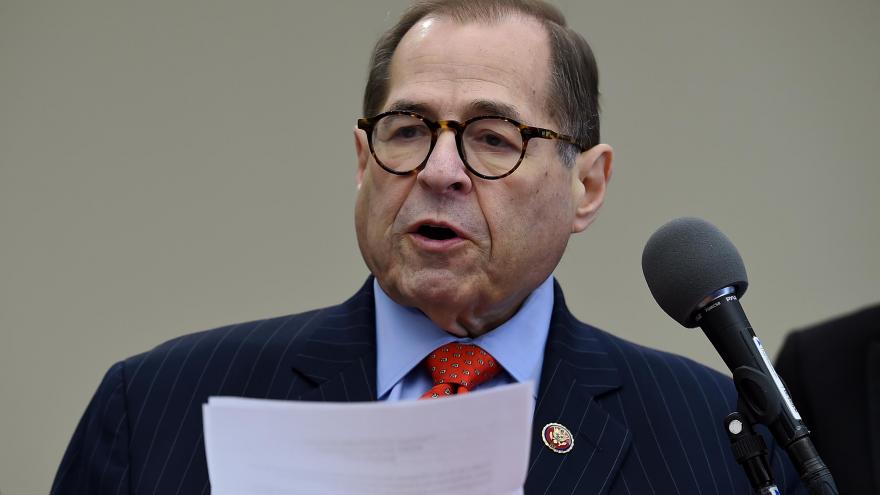 (CNN) -- With sources telling CNN a vote in the Judiciary Committee to impeach President Donald Trump is expected as soon as this week, House Judiciary Chairman Jerry Nadler said Sunday that he sees the Ukraine evidence as part of "a pattern" of conduct by the President.

But, in an interview Sunday with CNN's Dana Bash on "State of the Union," Nadler would not commit to including the evidence of obstruction of justice outlined in Robert Mueller's special counsel report as part of the articles of impeachment.

Nadler said he was confident in Democrats' "solid" case for impeachment, expressing optimism about the matter as the party moves closer to drafting articles. He thinks his party's case "if presented to a jury would be a guilty verdict in about three minutes flat."

"There is considerable direct evidence," Nadler said, adding that "it ill behooves a President or his partisans to say you don't have enough direct evidence when the reason we don't have even more evidence is the President has ordered everybody in the executive branch not to cooperate with Congress in the impeachment inquiry."

Sunday's comments from Nadler, a New York Democrat, come a day after his committee released a report laying out historical arguments for impeachment. The Saturday report did not accuse Trump of committing impeachable offenses, but it lays the groundwork for a Monday hearing before the panel, where evidence against Trump will be presented by the House Intelligence and Judiciary Committees, as well as the possible introduction of articles of impeachment next week.

Nadler said decisions about what to include in articles of impeachment will be made following the hearing, telling Bash: "We're going to have to take a lot of considerations into account."

"What is the level of proof for the various allegations? How do they relate together? What is the level of support in our caucus and in the House for them? What might we persuade the Senate of -- all of these things have to be taken into account, realizing again that the central allegation, it's all of a pattern," Nadler said.

As Democrats consider including evidence from Mueller's probe into the articles, Trump's conduct as detailed in the special counsel's report will at least be part of Monday's discussion.

Democratic sources say that Monday's hearing will showcase a "pattern of behavior" of Trump that shows impeachable conduct while in office.

House Judiciary Committee counsel Barry Berke is likely to detail a pattern of Trump's behavior in his opening statement. That will likely include some discussion of the details of the Mueller report, sources said.

House Intelligence Committee Chairman Adam Schiff, who is leading the impeachment inquiry along with Nadler, would not on Sunday say explicitly whether he supports including information from the Mueller report in articles of impeachment, but seemed to indicate he does not.

"I can tell you as a former prosecutor it's always been you know, my strategy, in a charging decision, and an impeachment in the House is essentially a charging decision, to charge those that there's the strongest and most overwhelming evidence, and not try to charge everything even though you could charge other things," he said in interview on CBS' "Face The Nation." He later added: "I think we should focus on those issues that provide the greatest threat to the country."

Although Nadler during the impeachment of former President Bill Clinton warned against "a narrowly voted impeachment or an impeachment substantially supported by one of our major political parties and largely opposed by the other," the chairman on Sunday expressed little concern about the total lack of support from Republicans for Trump's impeachment.

"So you are willing to impeach the President with no Republican votes, correct?" Bash asked him.

Nadler mostly dismissed Republican complaints regarding the fairness of the process saying the GOP and the President have been offered the opportunity to present witnesses and have seen the public reports.

"It's up to them to decide whether they want to be patriots or partisans," he replied.

Nadler also said he declined last week to call the eight witnesses Republicans requested to come before the committee because he viewed them as being "irrelevant."

"They can appeal to the full committee if they wish and we'll have a vote on that. But like any trial judge, you keep the witnesses to the relevancy," he said, adding that "every procedure, every fairness has been given to them."

"They have had adequate time (to call witnesses)," Nadler told Bash, referring to House rules that require him to give Republicans a day to call their own witnesses.

In anticipation of Monday's hearing members of the House Judiciary Committee spent Sunday much like Saturday, prepping in the same hearing room they'll sit in Monday and workshopping potential questions in real time.

They were joined on Sunday by Cass Sunstein, according to one person familiar. Sunstein, a constitutional scholar who also worked as the administrator of the White House Office of Information and Regulatory Affairs during the Obama administration, was a vocal opponent of the Clinton impeachment.