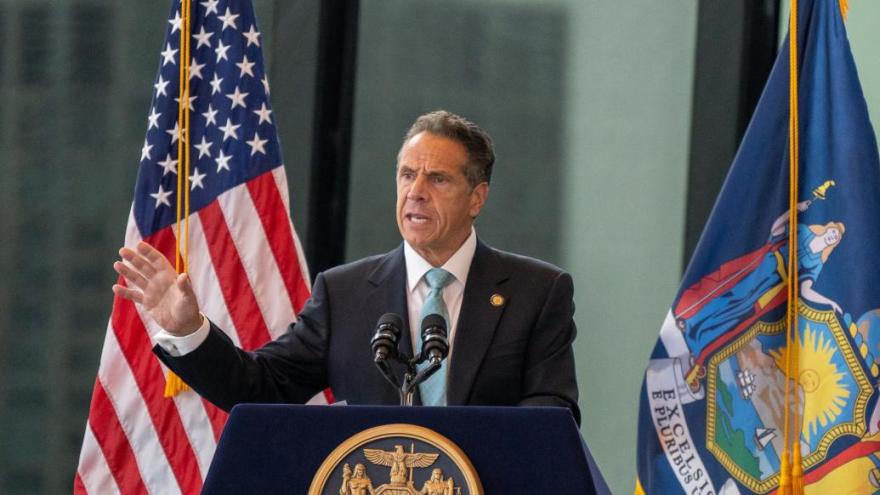 (CNN) -- A criminal complaint alleging forcible touching, a sex crime, has been filed against former New York Gov. Andrew Cuomo in Albany, according to a copy of the complaint obtained by CNN.

Cuomo, a Democrat who resigned from his post in August after multiple women accused him of sexual harassment, is the subject of a misdemeanor charge in connection with an alleged incident at the governor's mansion on December 7, 2020.

The complaint alleges that Cuomo "did intentionally, and for no legitimate purpose, forcibly place his hand under the blouse shirt of the victim (redacted) and onto her intimate body part" and that he touched the victim's left breast "for the purposes of degrading and gratifying his sexual desires."

The complaint was signed by Amy Kowalski, an investigator with the Albany Sheriff's Office, on Monday and was filed Thursday. But in a statement early in the evening, Albany County District Attorney David Soares said its filing of the complaint had caught him off guard.

"Like the rest of the public, we were surprised to learn today that a criminal complaint was filed in Albany City Court by the Albany County Sheriff's Office against Andrew Cuomo," Soares said. "The Office of Court Administration has since made that filing public. Our office will not be commenting further on this case."

In a statement, Cuomo lawyer Rita Glavin denied the charges and questioned the integrity of Albany County Sheriff Craig Apple.

"Governor Cuomo has never assaulted anyone, and Sheriff Apple's motives here are patently improper," Glavin said. "Sheriff Apple didn't even tell the District Attorney what he was doing."

Apple told CNN he was not surprised by Glavin's claim.

"I would expect nothing less from that camp," Apple said in a statement. "We get paid to protect people and help people that's exactly what we are doing."

The complaint laying out the allegations was signed by Kowalski, an investigator in Apple's office, not the sheriff. CNN has reached out to Kowalski for comment.

During a news conference Friday, Apple said information about the misdemeanor that his office had filed had been posted quicker than his office had anticipated, catching him and the local district attorney by surprise. But, the sheriff said he firmly believes his investigators' case against Cuomo is "solid."

Cuomo has repeatedly denied the allegations of sexual misconduct against him, allowing that he made mistakes, but always insisting that the more serious accusations were untrue. On August 3, New York Attorney General Letitia James issued a report detailing repeated incidents of alleged sexual harassment by Cuomo, who left office a week after the investigation was made public. He was replaced by then-Lt. Gov. Kathy Hochul.

The complaint states that the allegations are supported by documentation, including testimony found in the James report by an unnamed woman, as well as cell phone records, New York State Capitol entry "swipes" belonging to an unnamed person, New York State Police aviation records for December 7, 2020, and a text message from Cuomo's phone.

In a statement Thursday, James described the charges against Cuomo as a vindication of her office's report, which Cuomo has attempted to discredit.

"From the moment my office received the referral to investigate allegations that former Governor Andrew Cuomo sexually harassed multiple women, we proceeded without fear or favor," James said. "The criminal charges brought today against Mr. Cuomo for forcible touching further validate the findings in our report."

Cuomo has sought to portray the attorney general's probe, which was led by a pair of outside investigators, as politically motivated. In remarks announcing his resignation, Cuomo thanked the women who came forward with what he described as "sincere" complaints, but cast himself as the victim of changing social norms that he failed to understand.

"In my mind, I've never crossed the line with anyone. But I didn't realize the extent to which the line has been redrawn," Cuomo said at the time. "There are generational and cultural shifts that I just didn't fully appreciate. And I should have -- no excuses."