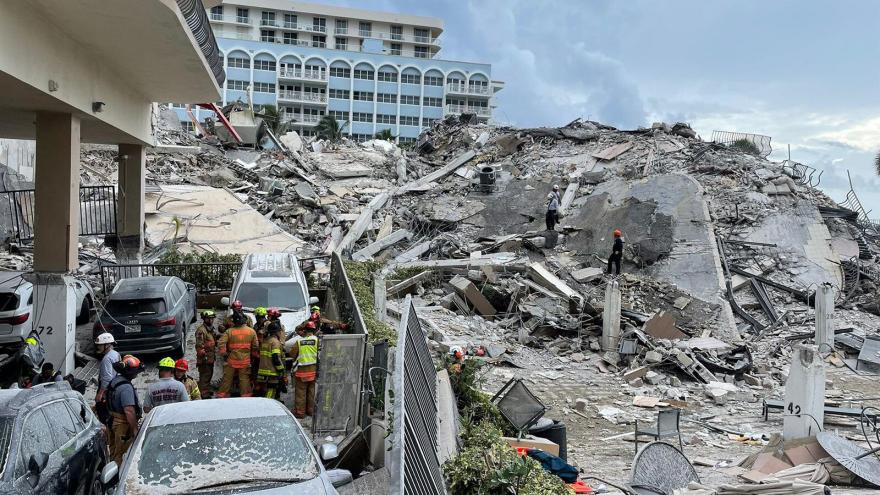 Approximately 55 units at the Champlain Towers South were impacted in the condo collapse in Surfside, Florida.

(CNN) -- Sara Nir and her two children were in their ground-floor condo at Champlain Towers South in Surfside, Florida, moments before it partially collapsed. She was checking emails when they heard knocking sounds, she said.

The knocking grew louder before she heard a "smash," as if a wall had collapsed in the unit above hers. She thought it was construction, she said. It didn't make sense, not at 1:10 in the morning.

Nir eventually found the building's security guard, and as she complained about the noise, she said, they heard a boom. She ran toward the sound and witnessed the building's underground garage collapse. It was like something out of a movie, she said.

The mother's account is the latest to suggest last week's deadly collapse began in the lower reaches of the building. Several engineers have told CNN that video of the collapse suggests the failure began near the structure's foundation, and a 2018 survey prepared ahead of the building's mandated 40-year certification cited problems in the pool area and the garage beneath it.

Thinking the commotion was an earthquake, Nir told her children, "Run as fast as you can," and they took off, leaving the property and crossing Collins Avenue, the one-way thoroughfare hosting hotel and condo towers on the eastern edge of the barrier island that is home to Surfside.

"God was waiting for us to leave the building -- and then another big boom," Nir told CNN. "Then we didn't see anything. It was suddenly white after the big boom and with white clouds all over."

Did the pool area present signs of danger?

Nir's story jibes with what Michael Stratton's wife told him just before the collapse. According to the Miami Herald, Cassondra Stratton was in their fourth-floor condominium when she called her husband, who was in Washington, DC, around 1:30 a.m.

She was frantic and told him the building was shaking, Michael Stratton told the Herald. She reported that a sinkhole had opened up where the pool used to be, he said. Then, the line went dead.

Stratton's wife is among the 145 people still unaccounted for as rescuers comb through the rubble that once composed dozens of apartments. The death toll from Thursday's disaster stands at 18.

A pool contractor who was at the tower the Tuesday before the collapse said that while the pool deck area looked fine from the surface, he observed standing water in the garage and cracks in the pool maintenance room, the Herald reported.

The contractor has not been named, but Herald reporter Sarah Blaskey spoke to him.

His initial thought was, "Wow, why haven't they maintained this building better?" and took a photo to send to his boss, Blaskey recounted. He was on-site for what he thought was "cosmetic stuff" to spruce up the pool area, but once he went below he felt, "This is going to be a bigger job," the reporter told CNN.

Forensic engineer Stephanie Walkup, a professor at Villanova University, said the deterioration seen in the photo "does look significant," but she emphasized the contractor's photo came from the pool maintenance area, which is not where the building appears to have begun caving in -- an observation echoed by the Herald reporter.

"But it is clear that water has been infiltrating the concrete deck in that area for some time to the point of extensive corrosion," Walkup said.

A 2018 photo,shared with CNN by Tom Henz, shows the earlier stages of the crack engineers and experts consulted by CNN say appears to be the same crack visible in 2021, although the more recent photo appears to show it has worsened. The cause of the apparent deterioration is not clear.

After inspecting the building in 2018, engineer Frank Morabito wrote in a report that "failed waterproofing" below the pool deck was "causing major structural damage to the concrete structural slab below these areas," and warned that failure to replace it in the near future would cause "concrete deterioration to expand exponentially."

A 2021 letter to the building residents from the condominium association's president confirmed that the exponential deterioration had indeed taken place in the interim years.

"The concrete deterioration is accelerating," wrote Jean Wodnicki, the association president. "The observable damage such as in the garage has gotten significantly worse since the initial (2018) inspection."

The experts CNN spoke to said that the progression seen in the crack between the two images could be an indication of the deterioration caused by the waterproofing problem described by Morabito. Or, some said, the concrete around the crack could have simply fallen off during the three-year gap to reveal the deeper fissure seen in the 2021 photograph.

A representative of the Champlain Towers South condo association declined to comment.

Mehrdad Sasani, a professor of civil and environmental engineering at Northeastern University, and Joel Figueroa-Vallines, president of SEP Engineers, have said the available information about the building, along with video of the collapse, suggest something may have failed near the foundation of the building. They've also said that, rather than a single smoking gun, a combination of factors likely compromised the building's integrity.

Those factors could include vibrations from nearby construction work, heavy equipment placed on the concrete roof for repairs, water damage and exposure to corrosive salt in the seawater and air.

On Wednesday, Sasani shared another hypothesis. The building's floor system was made of 8-inch-thick concrete plates atop columns, he said.

"Given the sudden nature of collapse, one potential mode of failure is so-called 'punching' failure," in which the column punches through the slab and "potentially progress(es) from there," the professor said.

Investigators should be looking for any instability in the foundation, possibly including weak points within the 200 or so precast piles that help support the building, or perhaps corrosion in the steel rebar used to reinforce the concrete.

Morabito Consultants in 2018 conducted a survey of the building for its 40-year certification, a stringent process for updates and improvements enacted after Hurricane Andrew in 1992. The firm found spalling, or deterioration, of the concrete, though engineers have differed on what that ultimately means.

"Abundant cracking and spalling of various degrees was observed in the concrete columns, beams and walls," the survey found. "Several sizeable spalls were noted in both the topside of the entrance drive ramp and underside of the pool/entrance drive/planter slabs, which included instances with exposed, deteriorating rebar. Though some of this damage is minor, most of the concrete deterioration needs to be repaired in a timely fashion."

The waterproofing below the pool deck and entrance drive was failing and causing "major structural damage," said the report, which did not indicate the structure was at risk of collapse.

The report also cited a "major error" it found in contracting documents drawn up by two architectural firms before the building was constructed in 1981. The waterproofing below the pool deck and entrance drive was placed on a flat surface with no slope, which caused the water to pool until it evaporated, the report said.

At least one structural engineer -- Jason Borden, who examined the building last year -- said he saw cracks in the building's facade and plaza level, but it was nothing alarming. The 2018 report, he added, was "very typical of what we see in buildings of this age and condition."

Morabito Consultants provided the condominium association with an estimate for "extensive" repairs, including cracks and breaks in the concrete, "which required repairs to ensure the safety of the residents and the public," it said in a statement.

Condo owners were told the building needed $15 million in repairs, which the building association approved in April, according to documents obtained by CNN. An itemized list of planned repairs included new pavers, planter landscape and waterproofing -- some of the issues raised in the 2018 report -- along with $3.4 million in "facade, balcony and railing repairs."