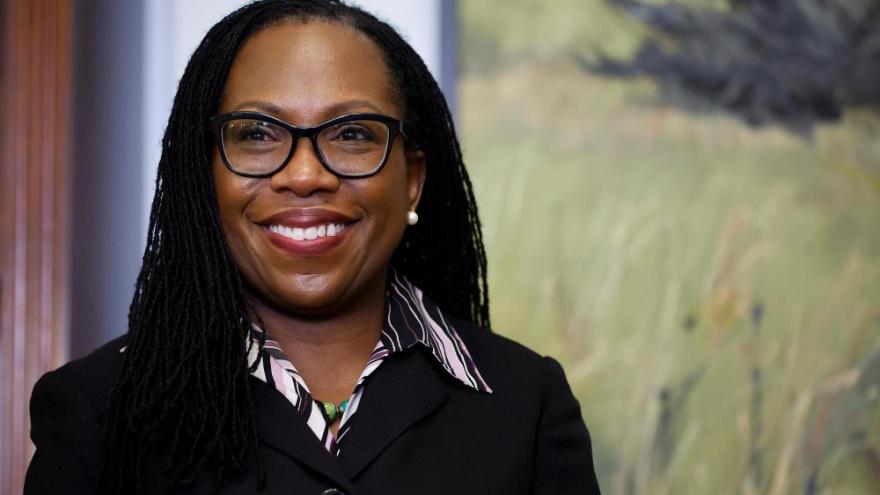 Jackson said that she was a beneficiary of the Civil Rights Act passed in the decade before she was born, hardworking parents who gave her an African name -- "Ketanji Onyika" or "lovely one" -- and those who came before her, including Judge Constance Baker Motley, the first African American woman to be appointed to the federal bench.

But Jackson, like some previous Supreme Court nominees, gave little hint of her personal judicial philosophy, saying she decides cases "from a neutral posture" and interprets the law "without fear or favor, consistent with my judicial oath."

"If I am confirmed, I commit to you that I will work productively to support and defend the Constitution and the grand experiment of American democracy that has endured over these past 246 years," said Jackson.

Democrats touted President Joe Biden's pick as a qualified, boundary-breaking nominee, while some Republicans criticized her record on crime and the support she holds from left-wing groups.

Jackson, 51, sits on DC's federal appellate court and had been considered the front-runner for the vacancy since Justice Stephen Breyer announced his retirement. Jackson worked as a clerk for Breyer, a federal public defender, an attorney in private practice, a federal district court judge and a member of the US Sentencing Commission.

At the hearing Monday, Jackson and the senators delivered their opening statements establishing the arguments for and against her confirmation. She was introduced by Judge Thomas Griffith, formerly of the US Court of Appeals for the District of Columbia Circuit, and Lisa Fairfax, a professor at the University of Pennsylvania Carey Law School. Jackson's parents, Johnny and Ellery Brown, her daughters Leila and Talia, and her husband Patrick were sitting behind her.

Jackson will answer questions from the members on Tuesday and Wednesday, and witnesses will testify on Thursday. Democrats hope to confirm Jackson by early April.

Democratic Sen. Dick Durbin of Illinois, the chairman of the Judiciary Committee, opened the hearing by putting Jackson's nomination in historical context, noting that of 115 Supreme Court justices, 108 have been white men.

"Not a single justice has been a Black woman," Durbin said. "You, Judge Jackson, can be the first."

"It's not easy being the first," he added. "But your presence here today, your willingness to brave this process, will give inspiration to millions of Americans who see themselves in you."

No Democratic senators have signaled they will oppose Jackson, and some Republicans have expressed openness to supporting her. In the 50-50 Senate, Vice President Kamala Harris could break a tied vote and confirm Jackson to the Supreme Court.

But many Republican senators are expected to oppose the nomination and some preemptively defended themselves from any criticisms that voting against Jackson would be perceived as sexist or racist, noting that Democrats have opposed diverse picks in the past because of their judicial philosophy.

"I'll be looking to see whether Judge Jackson is committed to the Constitution as originally understood," said Sen. Chuck Grassley of Iowa, the top Republican on the Judiciary Committee.

Republicans previewed on Monday their attempts to portray Jackson as weak on crime. Grassley said in his opening statement that there are two types of nominees who have worked criminal cases: "Bill of Rights attorneys who want to protect defendants' constitutional rights" and "criminal defense lawyers who disagree with our criminal laws."

Some Republican senators indicated that they will press Jackson for advocating on behalf of detainees at Guantánamo Bay in private practice after representing them as a public defender.

"I'm a bit troubled by some of the positions you've taken and arguments that you've made representing people who have committed terrorist acts against the United States and other dangerous criminals," Texas Sen. John Cornyn said.

Missouri Republican Sen. Josh Hawley has raised concerns about Jackson's record on sentencing in child pornography cases. Hawley said on Twitter last week that there is "an alarming pattern when it comes to Judge Jackson's treatment of sex offenders, especially those preying on children."

Democrats have refuted Republicans' attacks since her nomination. When Biden gave a speech announcing his pick in February, he made sure to note that Jackson came from "a family of law enforcement, with her brother and uncles having served as police officers."

The White House and Senate Democrats have pushed back on Hawley's attack, noting that Jackson has the support of law enforcement groups, including the International Association of Chiefs of Police and the Fraternal Order of Police, and dozens of former state attorneys general. They noted she has already been confirmed by the Senate three times.

"In the vast majority of cases involving child sex crimes, the sentences Judge Jackson imposed were consistent with or above what the government or US probation recommended," White House press secretary Jen Psaki said last week.

A CNN review of the material in question shows that Jackson has mostly followed the common judicial sentencing practices in these kinds of cases and that Hawley took some of her comments out of context by suggesting they were opinions, rather than follow-up questions to subject-matter experts. It has become a norm among judges to issue sentences below the guidelines in certain child pornography cases that don't involve producing the pornography itself.

"Some have said that the federal sentencing guidelines are too harsh on child sex crimes, especially child pornography," said Hawley on Monday. "I'll just be honest. I can't say that I agree with that."

There are other matters Republicans may probe.

During Jackson's confirmation hearings last year, some Senate Republicans focused on a 2019 case she heard between the House Judiciary Committee, which was looking into then-President Donald Trump's possible obstruction of special counsel Robert Mueller's Russia investigation, and former White House counsel Don McGahn. Ongoing cases involving Trump and the powers of government could land before her on the Supreme Court, including disputes over whether Congress can access Trump's financial records and whether Trump could be held accountable by private litigants for the January 6, 2021, insurrection.

Last year, Grassley challenged Jackson's declaration that "presidents are not kings" and suggested she was engaged in a kind of hyperbole.

Senate Republicans have also pushed for Jackson to publicly oppose efforts to expand the court, which activists on the left have called for since they blocked then-President Barack Obama's Supreme Court nominee Merrick Garland in 2016 and then expanded, under Trump, the high court's conservative majority from 5-4 to 6-3. Jackson's nomination to replace another liberal will not change the ideological balance of the court.

"Nine is a number that works," said Utah GOP Sen. Mike Lee. "We must protect the court."

Still, even those who may oppose Jackson expect the hearings this week to be less contentious than those in the Trump era, which altered the balance of the court and, in the case of Supreme Court nominee Brett Kavanaugh, centered on allegations of sexual assault.

"Most of us couldn't go back to our offices during Kavanaugh without getting spit on," said Graham to his Democratic colleagues. "I hope that doesn't happen to y'all. I don't think it will."

Jackson may receive some votes from Republicans. Last year, she received three -- from Graham, Susan Collins of Maine and Lisa Murkowski of Alaska -- confirming her to serve on the US Court of Appeals for the District of Columbia Circuit.

Graham preferred for Biden to choose Judge J. Michelle Childs from his home state and criticized the President for picking another Ivy League-educated nominee, claiming on Monday that Childs would've received "60-plus" votes, including from himself. Jackson went to a public high school in Miami before earning both her undergraduate degree and law degree at Harvard University.

Graham, like other Republicans, criticized Jackson for holding the support of left-wing groups.

"Now we're facing a choice sponsored by the most radical elements of the Democratic party when it comes to how to be a judge," Graham said.

But Collins has praised Jackson's credentials and experience as "impressive." The Maine Republican said she would not make her decision until after the Judiciary Committee hearings.