Congress extends pandemic school lunch waivers, though not all kids will benefit 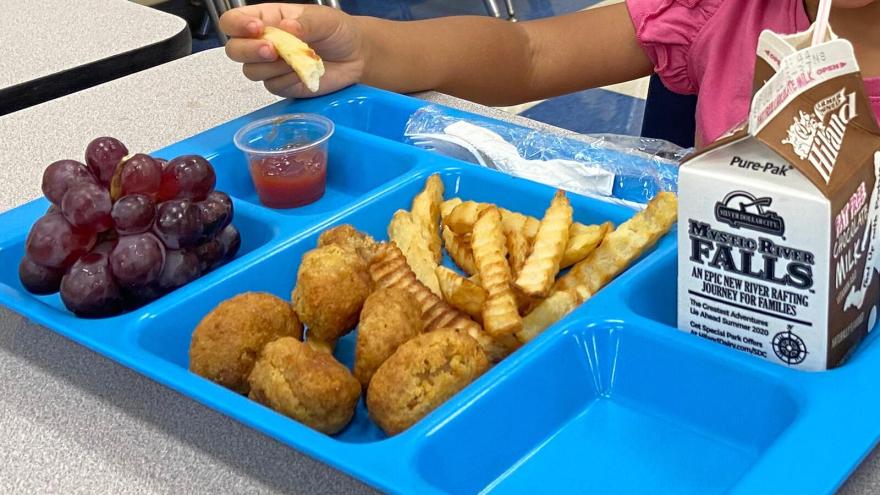 Congress voted June 24 to extend the pandemic school meal waivers that have helped keep tens of millions of children fed and gave districts the funding and flexibilities needed to cope with supply chain and labor issues.

(CNN) -- Congress voted Friday to extend the pandemic school meal waivers that have helped keep tens of millions of children fed and gave districts the funding and flexibilities needed to cope with supply chain and labor issues.

Lawmakers approved the nearly $3 billion bill, titled the "Keep Kids Fed Act," just a week before the waivers were set to expire on June 30. The legislation was crafted as a bipartisan compromise after Republican senators refused to support an extension of the waivers as part of the federal government spending bill in March.

After the House passed it by a 376 to 42 vote on Thursday, the Senate amended the legislation and then approved it later that day by unanimous consent. The House passed the revised bill by a voice vote on Friday.

"This is something that frankly ought to be easy in America," said Michigan Sen. Debbie Stabenow, a Democrat who co-led the effort to extend the waivers as chair of the Senate Committee on Agriculture, Nutrition and Forestry. "This is about feeding children, making sure children don't go to school hungry so they can be successful."

The deal, however, includes changes that are expected to reduce how many children would have access to school meals -- both during the summer and the coming school year. It would also lower the federal reimbursement rates from the heightened level that districts were receiving.

Still, school nutrition advocates said they are grateful for the extension, which was paid for using funds from the US Department of Agriculture and the American Rescue Plan Act, which Congress passed in March 2021.

"School meal programs were in a position where they were wondering whether they would be financially and operationally sustainable next school year," said Diane Pratt-Heavner, spokesperson for the School Nutrition Association. "These funds are really a lifeline for school meal programs all over the country."

The pandemic waivers allowed all children to obtain free school meals, regardless of income.

However, the extension would require most low-income families to once again apply for the program and for kids who qualify for reduced-price meals to resume paying for breakfast and lunch.

That would put a considerable burden on schools, which are short-staffed already, and on parents, particularly those who are immigrants, said Lisa Davis, senior vice president at Share Our Strength, which is focused on ending hunger and poverty.

"I am really worried about the beginning of the school year when there are a whole bunch of families that don't realize they need to fill out an application," she said. "So their kids are going to school and falling through the cracks, not getting meals or racking up meal debt until their applications get processed."

Also, the legislation would continue to give districts extra funds to compensate for higher food and labor costs, but not as much as they had been receiving. It gives schools an extra 15 cents for breakfast and 40 cents for lunch, on top of the annual adjustment for inflation that happens in July.

Without an extension of the waivers, the USDA had projected in March that the average reimbursement a school would get for a meal would drop from $4.56 to an estimated $2.91.

The bill would allow the USDA to still provide school districts with flexibilities to deal with supply chain issues and labor shortages, waiving penalties for those that can't always meet federal nutrition requirements. Many schools are not consistently receiving the items they order, including whole-grain foods, milk and certain vegetables.

Also, school districts and community groups would continue to have the freedoms they did during the last two summers. The changes nearly tripled the number of free meals served in July 2020 to 263 million, compared with the previous July, according to an analysis by Share Our Strength's No Kid Hungry campaign.

Schools and non-profits could operate more distribution locations, not just in areas with high poverty rates, and deliver meals to children in rural areas. And they could provide children and parents with grab-and-go meals, instead of requiring that the kids eat on site, which was a major inconvenience and deterrent for many. Plus, families would be able to pick up multiple meals at once.

The loss of these summer flexibilities could have reduced the number of meals served by 95 million this July, according to the No Kid Hungry analysis, which was done before Congress acted.

Down to the wire

Many schools, however, have already set up their summer meal programs under the more limited pre-pandemic rules. It could be difficult for them to change quickly, especially since some districts are already almost halfway through their summer breaks.

They may not have the food or staff available to open more sites or extend their programs for additional weeks. And they'll have to get word out to parents that they and their kids can take food home, after telling families that their children have to eat at the distribution location.

Districts where schools are still in session or just recently ended classes may have an easier time, as may non-profits that provide meals.

"Whether schools can pivot and expand services depends on when their summer meal programs started," Pratt-Heavner said.