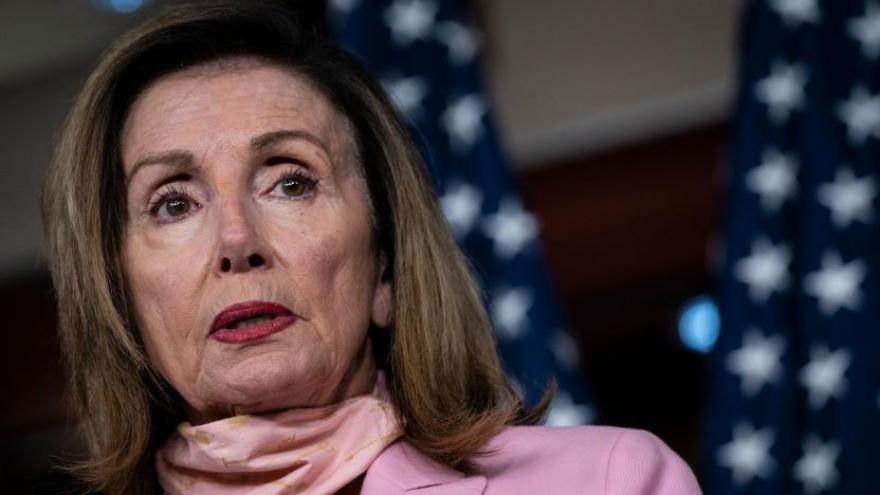 Speaker of the House Nancy Pelosi speaks during her weekly news conference at the Capitol on July 31, 2020 in Washington, DC.

(CNN) -- The negotiators are, at long last, actually negotiating.

After seven meetings, totaling more than a dozen hours, the top Democratic and White House negotiators are not just walking through their disagreements, but putting offers on the table, trading proposals and to a small degree, starting to make concessions. They've even agreed on a deadline for a deal -- the end of this week.

Majority Leader Mitch McConnell said on Wednesday afternoon senators will "certainly be in next week," delaying the start of the chamber's August recess.

"We'll certainly be in next week. We'll see what happens after that," McConnell said.

Missouri Sen. Roy Blunt, a member of leadership, argued that if there wasn't a deal, members might as well go home.

"If there's not a deal by Friday, there won't be a deal," Blunt said.

Bottom line: There is still a long way to go and an agreement to a timeline to reach an agreement -- one that is already one week after the initial deadline -- isn't much on its face. But what's happening behind the scenes is a signal things are actually starting to kick into gear.

What to watch: Treasury Secretary Steven Mnuchin and White House chief of staff Mark Meadows will be back on Capitol Hill for negotiations.

What was put on the table

The Tuesday meeting between Speaker Nancy Pelosi, Senate Democratic Leader Chuck Schumer and the top White House negotiators, Treasury Secretary Steven Mnuchin and Mark Meadows, the White House chief of staff, was by far the most productive of all the meetings up to this point, according to both sides.

Schumer said both sides made concessions and, most importantly, the talks had gone beyond identifying areas of disagreement or even topline points of overlap and have now moved to trading actual paper proposals between sides. It seems minor or just an obvious step in the process, but the trading of paper means things are getting real, finally.

That came in large part due to what the White House negotiators put on the table. To be clear, these proposals weren't agreed to and won't be accepted by Democrats (much to the frustration of the administration negotiators). But they represent tangible movement -- the type of movement that can draw out real concessions and counters.

These were the baseline White House offers made, according to two sources with knowledge of the matter:

State and local aid: An additional $200 billion in state and local funds, up from the offer of zero in the initial Senate Republican proposal. (Republicans point to tens of billions in aid that remains unspent from the initial proposal and initially proposed adding flexibility to how that money could be spent instead of new funds.)

The White House offers were first reported by Politico's Playbook.

Window into the hurdles

But Democrats want more than just an extension -- they want actual assistance for renters included in the proposal. So the White House put an extension of past agreed upon policy on the table, and Democrats countered with wanting more aid. That's going to be a consistent tension in each piece of these talks.

To underscore the point: Pelosi, on PBS Newshour after the meeting last night, was asked if there was some middle ground on unemployment insurance in between the original GOP offer of $200 and the Democratic position of maintaining the $600.

The White House perspective, from Meadows, to reporters after the meeting: "I would characterize concessions made by Secretary Mnuchin and the administration as being far more substantial than the concessions that have been made by the Democrat negotiators."

The Democratic perspective, from Schumer, to reporters after the meeting: "We're still slogging through step by step by step, and we're making progress. It's not easy, but we're going to keep at it until we get the kind of bill the American people demand and need, which is a bold, strong bill."

Keep an eye on this: Postmaster General meeting

The Democratic negotiators demanded, and will get, a meeting with the Postmaster General on Wednesday. Funding for the US Postal Service is a major issue in these talks and this meeting -- and any commitments that come from it -- could go a long way toward easing the path on that issue. Or making it more complicated.

As Schumer told reporters: "We have demanded that we talk to the Postmaster General because we have seen the late mail and we're very worried about the effect on the election. And he's going to come meet with us tomorrow and explain to us why there are so many delays and how that might affect the election."

CNN's Manu Raju reports Democrats have offered plussing up USPS money by $10 billion over one year. The House-passed Heroes Act had $25 billion for the USPS over three years.

Schumer has been trying to get DeJoy on the phone but the postmaster general hasn't scheduled a call with him -- so this will be the first time they talked, one of the sources said.

Not subtle: When it comes to the tone and tenor of the talks up to this point, note this pointed remark from Pelosi to reporters after the meeting. Read into it what you will given who Pelosi and Schumer are negotiating with on this bill.

"Leader Schumer and I are legislators, with long experience in writing legislation. We know that the devil is in the details. So are the angels. And it's very important that we have a complete understanding of each other of what we are agreeing to. It's not a conversation, it's a legislative interaction."

Trump has said he is considering executive action if there is no progress toward an agreement on unemployment insurance, the payroll tax and the eviction moratorium. Administration officials acknowledge this is a leverage play. Democrats can't really see the leverage because nobody thinks the President has the authority to do what he is claiming he can do -- and if he tries, it won't be to the scale necessary to address the scope of the actual problems. Just keep that in mind when and if the issue of unilateral action comes up again.

Pelosi, when asked by CNN's Manu Raju, what she was seeking for a topline in any final agreement, said $3.4 trillion -- roughly the cost of the House-passed bill from May.

Mnuchin, asked by Manu about that, called it "ridiculous."

This is going to become a problem in the days ahead. The topline number is very important for both sides and no amount of budget gimmicks or sleight of hand can reconcile a roughly $2 trillion difference. Keep an eye on this issue.

McConnell hasn't been in the room for the negotiations with Schumer and Pelosi, but Mnuchin and Meadows make a beeline for his office each day after those talks come to a close. His view remains extremely important to the talks -- and multiple people tell me the administration won't agree to anything, or put anything on the table, without his sign off.

That makes what he said publicly on Tuesday all the more important.

The Kentucky Republican acknowledged there is no unified Republican position and a good number of Republicans will likely vote against any final agreement -- something he's said publicly before.

But he made clear whatever the deal is, he's going to be behind it, providing a push and some cover for his colleagues.

"The American people, in the end, need help, and wherever this thing settles between the President of the United States and his team that has to sign it into law, and the Democrat not-insignificant minority in the Senate and majority in the House is something I am prepared to support — even if I have some problems with certain parts of it," McConnell told reporters.

McConnell has made clear he wants an agreement because he believes it's necessary with the pandemic still very much ravaging parts of the country. But, as we've noted many times in this note, he's also keenly aware of the political ramifications of this moment. He has a handful of his members in very tough races -- and those members have made clear they don't want to go anywhere until there's a deal in hand.

"If we can't get this done in the midst of a persistent pandemic then we have failed the American people," Maine Sen. Susan Collins told reporters Tuesday. "And I'm optimistic that we will be able to get it done."

Sen. John Cornyn, who isn't in as tough of a race as some of his colleagues, but nonetheless is up for reelection, put it bluntly: "How do you think it looks for us to be back home when this is unresolved? This is the most important thing we need to be doing."

McConnell is aware of these voices and dynamics. In fact, they are likely the most important in his universe at the moment.