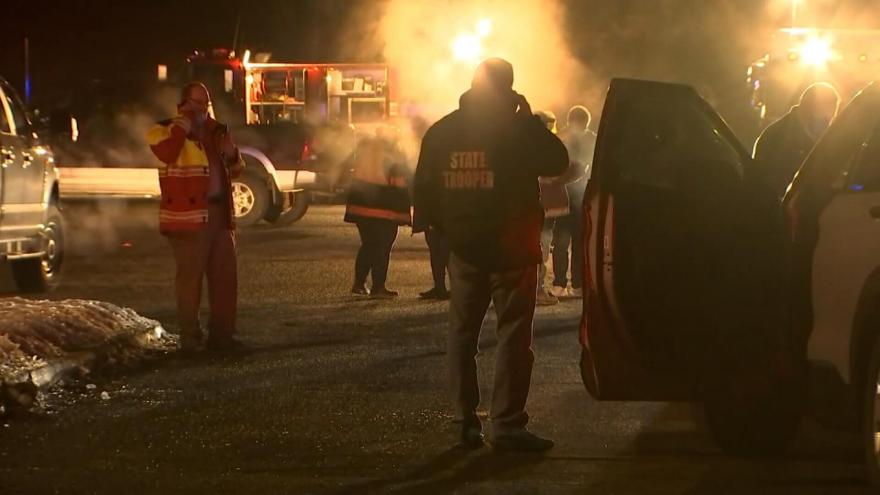 A 37-year-old Connecticut man allegedly used a Molotov cocktail to start a fire at an ambulance facility and was also connected to other arson fires targeting Emergency Medical Services agencies in the state on Saturday, the Old Saybrook Fire Department said in a Facebook post.

(CNN) -- A 37-year-old Connecticut man who allegedly used a Molotov cocktail to start a fire at an ambulance facility is also responsible for starting at least four fires throughout the state, authorities said.

Richard White, 37, is in custody in Pennsylvania on charges related to the fires, a press release from Meriden Police said.

According to the press release, an employee at Hunter's Ambulance in Meriden told officers that White, who is employed by Hunter's, got into a physical altercation with another employee around 10 a.m. Saturday and fled the scene before police arrived.

White had previously been placed on administrative leave by the company after a disciplinary hearing, the release said.

After the altercation, he allegedly "ignited a makeshift Molotov cocktail inside of the employee room" at a separate Hunter's Ambulance location in Old Saybrook around 4:17 p.m., according to the release.

Within the hour, he was seen "throwing an already lit object" out of a 2004 gray Ford Taurus at the West Main Street location in Meridan, the release said.

A warrant issued for White out of Middletown lists charges of third-degree arson and third-degree burglary, as he was not permitted to enter the Old Saybrook facility at the time of the fire, Connecticut State Police Sergeant Paul Makuc said at a press conference Sunday

The Torrington, Connecticut, man fled the state and was taken into custody Saturday night in Pennsylvania, according to a Facebook post.

"At this time the suspect remains incarcerated in Pennsylvania and is awaiting extradition back to Connecticut to face charges in each of these municipalities," Makuc stated.

White is expected to be extradited and has a bond of $150,000 under the arrest warrant that was issued, the release from the fire department said. It's unclear whether the man has an attorney.

Roxbury Fire Chief Todd Wheeler told CNN affiliate WFSB they got a call about an automatic alarm at the firehouse around 5:45 p.m. ET on Saturday. Smoke was coming out of the ambulance bay by the time Wheeler arrived at the firehouse, WFSB reported.

Troopers from the state police's Fire and Explosion Unit were requested to assist at the scene of a fire Saturday evening at 6:15 p.m. in Roxbury. At the time time, another call came in from a second fire in Roxbury, Makuc said.

"It was quickly learned that these two incidents in the town of Roxbury were related to the fires that occurred in Meriden and the town of Old Saybrook," Makuc said.

Fire officials are still assessing how much damage there is, but noted that there were smoke-associated damages but no structural damage from the fires. Authorities are uncertain why the suspect targeted the locations, but they have confirmed that all four fires were intentionally set, according to Makuc.

Any other forthcoming charges are subject to the conclusion of the ongoing investigation, according to Makuc.

The Connecticut State Police is working with state attorneys from Middletown, New Haven and Litchfield to prosecute the case and develop additional charges. Federal partners, including the FBI and AFT, are now also involved, Makuc said.

"This individual has targeted those who we count on to save lives," said Old Saybrook Police Chief Michael Spera in the release. "Our Officers have worked diligently all evening obtaining both search and arrest warrants in an effort to quickly stop these violent attacks against public safety and cause the suspect to be taken into custody."