Connecticut trooper charged with manslaughter in 2020 shooting after chase 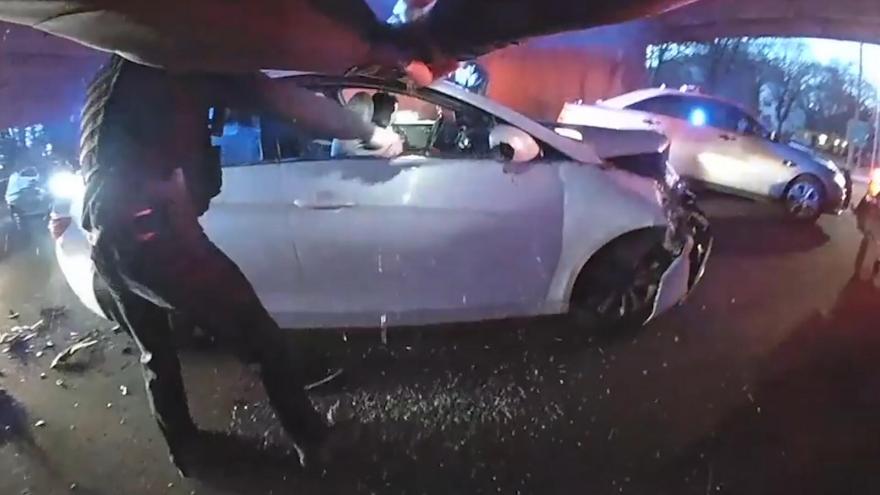 A Connecticut state trooper has been arrested and charged with manslaughter in the 2020 death of a carjacking suspect he shot after a high-speed chase, a state official's office said Wednesday.

(CNN) -- A Connecticut state trooper has been arrested and charged with manslaughter in the 2020 death of a carjacking suspect he shot after a high-speed chase, a state official's office said Wednesday.

Trooper Brian North's arrest comes after investigators concluded that his shooting of Mubarak Soulemane "was not justified," according to a report released Wednesday by state Inspector General Robert Devlin Jr.

North shot Soulemane, 19, on January 15, 2020, at the end of a chase that began after Soulemane, armed with a knife, carjacked a vehicle in southwestern Connecticut, state police have said.

"Stated briefly, the investigation establishes that, at the time Trooper North fired his weapon, neither he nor any other person was in imminent danger of serious injury or death from a knife attack at the hands of Soulemane," Devlin wrote in the report. "Further, any belief that persons were in such danger was not reasonable. I therefore find that North's use of deadly force was not justified under Connecticut law."

Soulemane's mother told investigators he had been diagnosed with schizophrenia at age 14 and may not have been taking his medication on the day of the police encounter, resulting in him becoming combative, the inspector general's report said.

Soulemane's family had called for North to be prosecuted. His relatives and friends held protests and vigils after police released video of the shooting days after the incident.

North, 31, has been released on a $50,000 bond and is scheduled to appear in court on May 3, according to a news release from Devlin's office.

North's attorney, Jeffrey Ment, declined to comment when reached by CNN. CNN has reached out to the Connecticut State Police Union for comment.

Soulemane, while armed with a knife, carjacked a white Hyundai in Norwalk, and then led police on a high-speed chase on Interstate 95 into New Haven, a roughly 35-mile drive from Norwalk, Connecticut State Police have said. Soulemane struck two cruisers and a civilian vehicle before he was boxed in by troopers shortly after exiting the highway, according to police.

Police camera footage shows an officer -- a West Haven police officer, according to the inspector general's report -- breaking the front passenger side window while other officers shout at the driver to exit the car. An attempt to use a stun gun on Soulemane proved "ineffective," police said in a statement at the time.

"When the driver displayed a weapon (later determined to be a knife), a trooper on scene discharged his assigned duty pistol, striking the driver," the statement said.

The trooper, later identified as North, fired about seven shots through the front driver's side window at Soulemane in the driver's seat, according to the footage.

In a seven-page statement that North submitted in February 2020, North wrote that before the shooting, he was standing outside the front driver's window with his gun drawn, watching Soulemane sit motionless when the West Haven officer started trying to break the front passenger window.

North told a trooper standing on the passenger side to holster his gun and switch to a Taser because Soulemane appeared to be unarmed, North wrote. North continued holding his own gun "to provide lethal cover in case the suspect escalated the situation," and because the West Haven officer appeared to have only a baton and the trooper was now holding only a Taser, North wrote.

"The suspect was moving and holding the knife in an aggressive manner, and appeared to me to be preparing to attack either (the other trooper) or the West Haven officer," North wrote. "Based on these circumstances, I believed that (the trooper) and the West Haven officer were at imminent risk of serious physical injury or death, and could have been stabbed in the neck or face as they attempted to enter the vehicle and remove the suspect. As a result, I discharged my duty firearm to eliminate the threat."

The other trooper wrote in a witness statement that he fired a Taser at Soulemane before North fired, but that the "Taser did not appear effective as it did not appear to penetrate" Soulemane's clothing.

The inspector general's report notes that the passenger door was always closed, was locked, and the only access point was the broken window.

Though Soulemane was holding a knife in the car, the troopers at the scene were not in "any actual or imminent danger of deadly force being used against them," the inspector general's report reads.

"Soulemane was in the driver's seat of the Hyundai and (the troopers) were outside of the vehicle," reads the report, which also said Soulemane couldn't open the driver's door enough to exit because a police cruiser blocked him in. "Although he held a knife in his right hand, he was not using the knife against them nor presenting any imminent threat to do so."

Two officers had been shouting that Soulemane was reaching for something, so "it is simply unreasonable" to believe any of the officers on the passenger side would intentionally place themselves "into a zone of lethal danger by crawling through the window knowing that an armed suspect ... was inside the car," the report reads.

"A reasonable police officer would know that officers would not put themselves in such a vulnerable position. Such reasonable officer would further know that, since they would not enter the car, they did not need protection from a knife attack by Soulemane," the report reads.