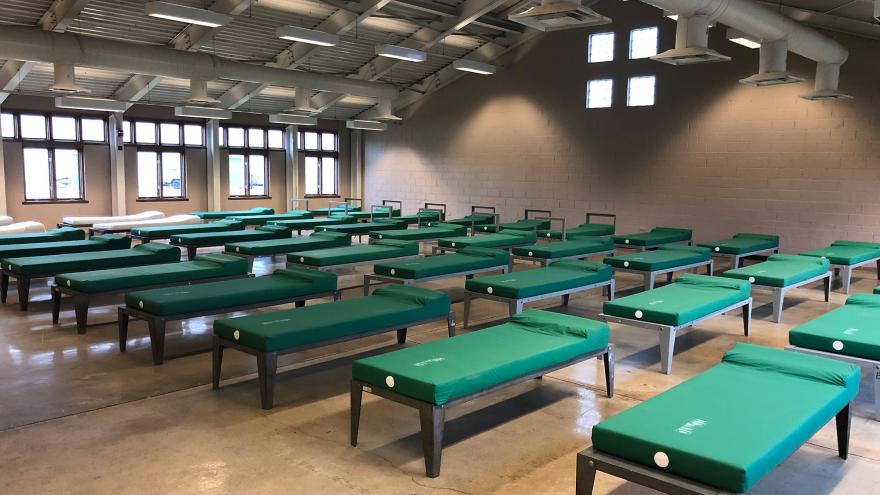 The quarantine camp at the Cook County Jail will keep Covid-19 infected detainees and those suspected of being infected so they\'re separate from the rest of the jail population. Credit: Omar Jimenez/CNN
By Madeline Holcombe, CNN

(CNN) -- A 59-year-old man is the first detainee from an Illinois jail where 220 people have tested positive for coronavirus to die from suspected complications of Covid-19.

Pendleton's official cause of death is pending an autopsy. Preliminary reports indicate he died of complications due to coronavirus, the sheriff's office said. If it is confirmed, Pendleton would be the first person in Cook County Department of Corrections to die from the virus, the statement said.

He had been hospitalized since March 30 after testing positive for the virus.

His case was one of many under review by the Cook County State's Attorney's and the Public Defender's offices, which are looking for individuals who might be eligible for bond reduction hearings, the statement said.

The county has begun screening and releasing nonviolent pretrial defendants to minimize the number of detainees as the coronavirus outbreak makes its way into America's biggest single site jail.

As of Sunday, there were 220 detainees who have tested positive and are being treated at the jail for mild-to-moderate symptoms, the statement said. Pendleton was one of 14 detainees being treated and monitored at hospitals.

"Jails in this country are petri dishes. They're the government equivalent of nursing homes or cruise ships," said Toni Preckwinkle, Cook County Board president. "It's very difficult in a jail to maintain social distancing."

Cook County is among the places the White House coronavirus task force worries is at risk for becoming another major hot spot.

Illinois now has more than 12,000 cases of coronavirus with 308 fatalities, according to data from Johns Hopkins University.

Sixty cases have been reported at the prison, Ezike said.