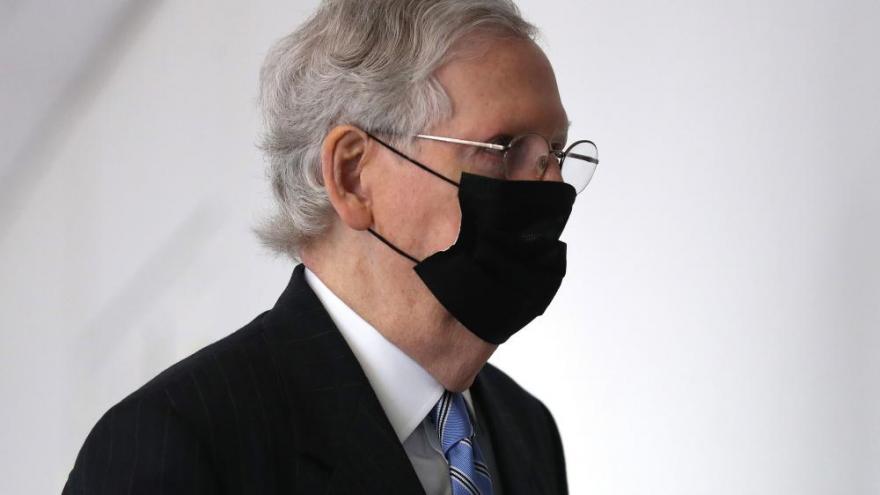 (CNN) -- The news that three US senators have been diagnosed with coronavirus threatens to upend what was expected to be a relatively smooth confirmation of President Donald Trump's third Supreme Court justice.

If you didn't know this before, the last 72 hours should serve as a reminder that when it comes to the mechanics, the confirmation and the future of what happens in Congress this month, nothing is certain.

That includes the confirmation of Amy Coney Barrett before Election Day. What unfolds over the days and weeks can't be controlled by a master political tactician like Senate Majority Leader Mitch McConnell or last-minute procedural hurdles unfurled by Minority Leader Chuck Schumer, a New York Democrat.

While more than 209,000 Americans have died of the virus and dmore than seven million Americans have contracted it, the case count in the halls of Congress has remained relatively low, lulling members into thinking that meeting for hour-long lunches, convening hearings and flying back and forth was less risky than it always was.

But coronavirus has come to the halls of Congress and no one can predict the impact the virus might have there over the next 30 days. That was always the case. Only now, we can no longer pretend to ignore it.

The fear and risk of the virus is so real that on Saturday, McConnell announced that the Senate would halt floor action over the next two weeks. That means votes won't happen this week or next. And aside from a few brief pro forma sessions, lawmakers won't be on the floor.

This is as much strategic as it is about safety. McConnell can only afford to lose three Republican senators' votes and still push through a Supreme Court nominee, and he can't risk exposing his members over the next several weeks to an unpredictable and relentless virus.

A reminder of the math: Both Republican Sens. Susan Collins of Maine and Lisa Murkowski of Alaska have already said they won't back any GOP nominee ahead of Election Day. We are still weeks away from a floor vote, but that leaves little room for McConnell to find the votes if members of his conference contract or remain sick with Covid-19.

In a letter over the weekend to his conference obtained by CNN's Manu Raju, McConnell wrote, "The Senate will go into pro forma session until October 19th. On that day, we will need all Republican Senators back and healthy to ensure we have a quorum."

That brings us to Judiciary

While floor action will be suspended until then, the Senate Judiciary Committee will still meet the week of October 12 for Barrett's confirmation hearings.

This sparked outrage from Democrats who argue that if it's too unsafe to meet for regular business, it is too dangerous to meet for a Judiciary Committee hearing. It's also launched a slew of logistical headaches for staffers who now -- in addition to preparing for a Supreme Court nomination hearing within 16 days of Barrett's nomination -- must also prepare for a hearing as Covid-19 infiltrates the Capitol.

According to aides, Democratic and Republican staffers are having conversations about how to ensure that members, staff, the nominee and her aides are protected. Expect to see additional seating for members, a limit on the number of staff, and far fewer spectators in the room.

Normally, these hearings run the entire day. They are intensive with staff running in and out of the room to assist their bosses and help them navigate complicated histories of a nominee's writings and case decisions. But they also are typically packed. Managing the room size, number of attendees and deciding whether or not everyone should be tested ahead of time all are decisions up for discussion right now. Democrats are pushing hard for required testing for everyone in the room, according to aides.

The biggest outstanding question is when two members of Judiciary who were diagnosed with the virus -- Republican Sens. Mike Lee of Utah and Thom Tillis of North Carolina -- will be healthy enough to return.

The important date to circle on the calendar is October 15. That's when Senate Judiciary Chairman Lindsey Graham will need a quorum present to vote. The committee has 12 Republicans and 10 Democrats. In order to have a quorum, Graham needs at least one of the two -- Lee or Tillis -- to be back. The fear is that if both were out, Democrats could boycott and keep Graham from having a quorum. That would delay the nomination process and put into jeopardy the chances that Barrett is confirmed by the full Senate ahead of Election Day.

Testing at the Capitol

If you've been watching the Capitol for the last six months, you may have seen intermittent calls for the Senate and House to get together a plan for widespread and regular testing at the Capitol complex.

Those calls have been led by Missouri Sen. Roy Blunt, a Republican in leadership and chairman of the Senate Rules Committee. But they've largely gone nowhere. In the spring, McConnell and House Speaker Nancy Pelosi rejected offers from Trump to use rapid tests at the Capitol out of concern that the optics of members having regular access to tests when Americans were struggling to get tests would be unseemly.

But the calls are growing louder and louder, with aides and members venting over the lack of a testing regiment on Capitol Hill when members are flying from every corner of the country on planes every single week.

Blunt has called the Capitol "a Petri dish," and he's right. The risks -- as the last several days have shown -- are great and those risks don't just affect members of Congress. There are hundreds of staffers, maintenance, cleaning and restaurant workers who operate in the Capitol.

A testing regimen would benefit all of them.