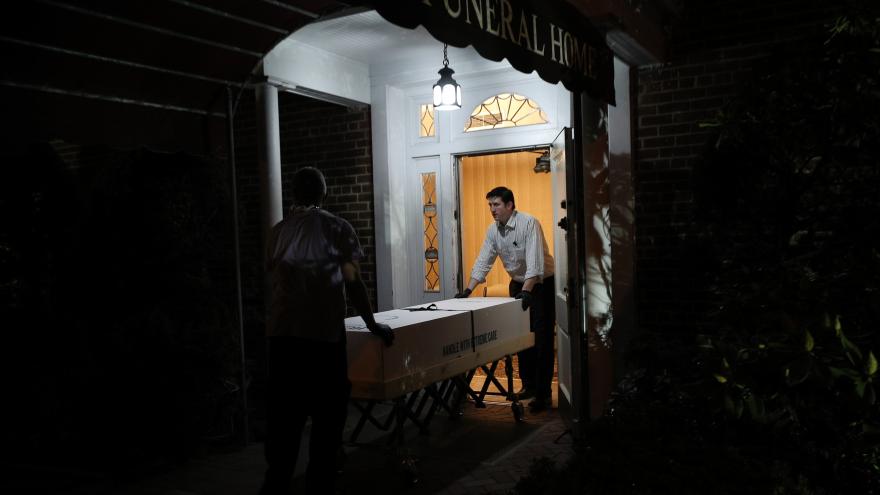 Originally Published: 28 AUG 20 10:12 ET
By Jay Croft, Jamie Gumbrecht, Jacqueline Howard and Susannah Cullinane, CNN
(CNN) -- Companies testing Covid-19 vaccines should know by the end of the year whether any can protect people from the virus, federal officials say.

Officials with the Operation Warp Speed coronavirus vaccine effort told reporters Friday that the public-private partnership is not cutting corners, but that it may not take long to tell if one or more of the vaccines works.

Paul Mango, deputy chief of staff for policy at the Department of Health Human Services, said during a phone briefing that Operation Warp Speed was "absolutely on track... if not a little ahead" in the race to have a Covid-19 vaccine by 2021.

Mango said the Food and Drug Administration had asked that each trial enroll 30,000 subjects, "and we are above the halfway point," with manufacturing already underway for three vaccines.

But he said the process of approving any eventual coronavirus vaccine would be the same as for any vaccine.

"There is a thing called a Data Safety Monitoring Board, an independent body that is assigned to each clinical trial," Mango said. "We have no insight into the data until the DSMB says we can look at it. They can come back and say, 'This is not a good vaccine.' They could come back before we even have 30,000 folks enrolled and say, 'We have enough. This looks great.'"

Mango said Operation Warp Speed will likely continue if President Donald Trump loses the presidential election in November, given that the "vast majority" of people working on it are not political appointees.

FDA extends use of Covid-19 drug

Meanwhile, the FDA has extended its emergency use authorization for remdesivir to all patients hospitalized for coronavirus, regardless of the severity of their disease.

An EUA allows the FDA to expedite use of a coronavirus drug that has not yet received full approval.

The FDA originally authorized remdesivir for emergency use in May only for patients with severe coronavirus who needed help breathing with extra oxygen or mechanical ventilation. The drug has been shown to shorten recovery time for some coronavirus patients.

The FDA said Friday that clinical trials of remdesivir, including phase three trials, showed a five-day course of the drug could reduce recovery time in moderately ill patients with pneumonia from Covid-19.

"The data show that this treatment has the potential to help even more hospitalized patients who are suffering from the effects of this devastating virus," FDA Commissioner Dr. Stephen Hahn said in a statement.

Since January, US health authorities have identified more than 5 million cases nationwide, and more than 180,000 people have died, according to the latest data compiled by Johns Hopkins University.

The United States has averaged 41,991 new cases over the last seven days, down 10% from the previous week, according to Johns Hopkins.

Iowa has overtaken the top spot in the nation when it comes to the highest 7-day average of new cases per 100,000 people, the data show, with 31.49. It is followed by North Dakota, Mississippi, Alabama and South Dakota.

A well-known coronavirus model previously cited by the White House forecasts more than 317,000 US deaths from Covid-19 by December.

As of Friday morning, the model from the Institute for Health Metrics and Evaluation at the University of Washington projects that 317,312 people may die from the illness -- marking an increase of about 8,000 deaths from a previous estimate the model projected a week ago.

The new IHME estimate suggests that the US could see more than 136,000 additional deaths between now and December, and the daily death rate could rise to more than 2,000 per day.

Yet IHME researchers noted on their website on Thursday, when they updated their model, that "if mask wearing in public increases to 95%, more than 67,000 lives could be saved."

Another forecast by the Centers for Disease Control and Prevention puts the number of US deaths at 200,000 by September 19.

"State- and territory-level ensemble forecasts predict that the number of reported new deaths per week may decrease in 18 jurisdictions. Trends in numbers of future reported deaths are uncertain or predicted to remain stable in the other jurisdictions," the CDC says on its forecasting website.

The National Association of County and City Health Officials and the Big Cities Health Coalition say they are "incredibly concerned with both the impact and the process" of the CDC's abrupt testing guidelines changes this week and urged in a letter sent on Friday that the CDC change course.

The CDC changed its Covid-19 testing guidelines Monday to say some people without symptoms may not need to be tested, even if they've been in close contact with someone known to have the virus. Previously, the CDC said viral testing was appropriate for people with recent or suspected exposure, even if they were asymptomatic.

The letter says that the lack of evidence cited to inform the changes has them "troubled," and changing testing guidance to suggest close contacts of those with confirmed Covid-19 do not need to be tested is "inconsistent with the science and the data."

In a statement Friday, American Academy of Pediatrics President Dr. Sally Goza urged the CDC to reverse its decision.

"The inexplicable decision by the U.S. Centers for Disease Control and Prevention to advise against testing individuals who have been exposed to the virus but who are asymptomatic is a dangerous step backward in our efforts to control this deadly virus," she said.

Goza said this testing will yield information that is crucial to answering questions about how the virus is transmitted, especially among children, who often show few or no symptoms.

"To control this virus, so that we can safely re-open schools and resume activities that allow children to be healthy and happy, we need the ability to conduct widespread testing and collect more information -- not less," Goza said.

Vermont Commissioner of Health Mark Levine said the state will not change its Covid-19 testing guidelines despite the new guidance issued by the CDC, with residents there still required to get tested if they think they have been exposed to the virus.

During a coronavirus press conference, state officials said that about 65% of students would participate in remote learning a few days a week.

"We are watching the numbers, the data and the signs," to see if schools and the economy will open more, Vermont Governor Phil Scott said.

In Georgia, Gwinnett County Public Schools said Friday that 34 of its more than 12,000 teachers had resigned for Covid-19-related reasons.

The district started the school year remotely but began the phase in to in-person instruction this week.

Teachers in Georgia's largest school system had recently protested the district's plan to phase students back into the classrooms.

In hurricane-hit Louisiana, Governor John Bel Edwards said Friday he was concerned about the slowdown in testing for Covid-19 after schools reopened.

"Frankly, we can not afford to loose sight of our testing, because it was about three weeks ago that our schools came back," Edwards said. "We have had students back on our college campuses, and as you know it takes about two weeks after behavior changes to see if there is any changes in positivity, which will lead to more hospitalizations and deaths."

"So this is a very bad week for us not to be doing robust testing," Edwards said at a press conference.

Researchers said Friday that inexpensive saliva tests that patients can administer themselves to check for coronavirus work at least as well as tests taken via nose swabs -- and might even work better.

A team at Yale University who developed an inexpensive saliva test compared it to tests taken the traditional way, by nasopharyngeal swabs.

"We tested saliva specimens collected by the patients themselves and nasopharyngeal swabs collected from the patients at the same time point by health care workers," Nathan Grubaugh of the Yale School of Public Health and colleagues wrote in a letter to the New England Journal of Medicine.

They found the samples were as useful for detecting coronavirus as the swabs were.

"In addition, a higher percentage of saliva samples than nasopharyngeal swab samples were positive up to 10 days after the Covid-19 diagnosis," they wrote.