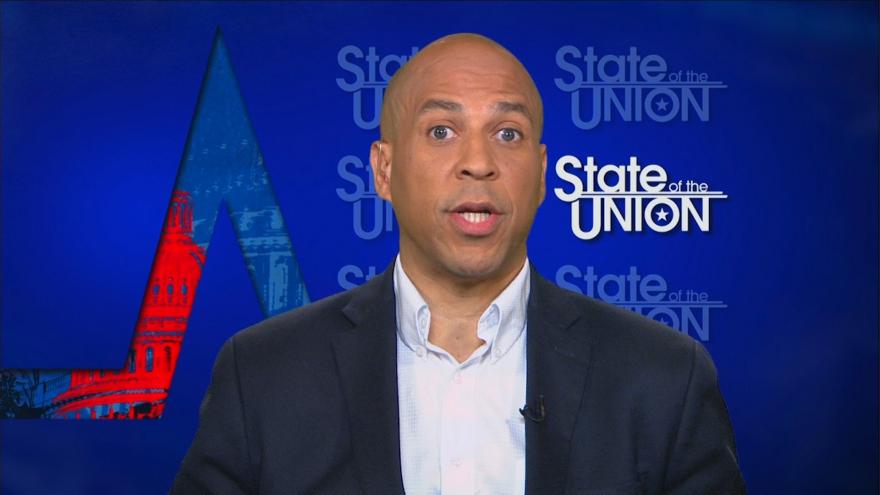 (CNN) -- Can one candidate be a lover and a fighter? Sen. Cory Booker thinks so — but his theory could be put to the test next week.

In recent days, Booker has called Biden an "architect of mass incarceration" for spearheading the 1994 crime bill, while the Biden campaign countered that the Newark Police Department under Booker was a "civil rights nightmare."

The back-and-forth has all but guaranteed that Booker and Biden will continue to hash out their disagreements on the debate stage next week. What's less clear, however, is who will come out on top.

For California Sen. Kamala Harris, clashing with Biden in the first debate proved to be jet fuel for her campaign. But taking on the role of the aggressor could be fraught for Booker, who has built his campaign on core values of positivity and unity.

This is "new territory" for Booker, said Patrick Murray, director of the Monmouth University Polling Institute, which is based in Booker's home state of New Jersey.

"It's not clear that it's actually going to be productive," Murray said. "That's not simply because it undermines his brand identity as a positive person, but it doesn't look like it's having an impact with the voters you need to sway."

Murray pointed to a Monmouth Poll of South Carolina Democrats released Thursday showing Biden with a commanding lead among the Democratic field with 39%, including dominant support with African American voters, and strong favorability with 79% of Democrats giving him positive marks. In this poll, Booker languished at 2%, in league with billionaire Tom Steyer, a late entrant to the 2020 field. Nationally, Booker has also been trending in the low single digits.

For months, Booker has professed to be satisfied with being a tortoise among hares — and, until recently, he regularly passed up opportunities to draw explicit contrasts with or criticize his rivals, including Biden.

"Joe Biden is going to have to defend his record and talk about what he stands for," Booker said in one May interview, on ABC's "This Week."

"I plan on focusing on my record."

But lately, Booker has been focusing more on Biden's record, too. Leading up to the Miami debate last month, Booker memorably called on Biden to apologize for touting his work with segregationist senators, including joking that one had not called him "boy" — sparking a multi-day spat with the former vice president. Now, as Booker has ratcheted up his criticism of Biden's role in bringing the 1994 crime bill to fruition, in response to a new criminal justice plan by Biden, Biden's team has responded aggressively with bullet points about Booker's own record as Newark mayor. During a gaggle with reporters earlier this week, Biden shook his head at Booker's jabs, saying, "Cory knows that's not true."

Underpinning Booker's rhetorical shift is an implicit appeal to Democratic voters, particularly African Americans, that Biden is not as "electable" as his campaign has suggested — and that the party would be better served by a candidate, like Booker, with a stronger record on issues of race and justice. Booker's argument comes as Biden continues to lead with African American voters.

"It is easy to call Donald Trump a racist now — you get no great badge of courage for that," Booker said during remarks at a National Urban League event Thursday in Indianapolis. "The question is, what were you doing to address structural inequality and institutional racism throughout your life?"

One source close to Biden's campaign said Booker seems to be taking a page from the "Kamala playbook" — hoping to inject life into his own campaign by drawing blood from the current frontrunner.

But Booker's campaign points out that he has only challenged Biden selectively, on Booker's own signature issues — which, as one of two African American candidates in the race, Booker is also uniquely positioned to speak to. It's no dramatic strategic shift, they say, but a natural evolution as the campaign progresses.

"We're not going down the Republican road of attacking each other on hand sizes," one Booker campaign aide said. "We're supposed to have this debate on policy. ...You can disagree on issues and still run a positive campaign."

For the candidate whom Kellyanne Conway likened to "a Hallmark card," making this transition to a more aggressive phase of campaigning could be awkward. But Booker has consistently stressed his own political duality. Yes, he speaks often about love, unity, etc. Yet he came up as a young politician in hardscrabble Newark, fighting entrenched machines for a foothold on power.

In key early primary states, Booker's campaign has been holding regular screenings of "Street Fight," a documentary chronicling his first race for mayor against Sharpe James, a longtime incumbent and an avatar of corrupt politics.

In one scene, Booker wrestles with how to respond to a negative attack by James, saying: "I'm not going to lose this race because we're afraid to punch Sharpe in the nose. I just think that there's a way to do it with dignity." Booker would go on to lose that race to James.

That familiar balancing act is even more complex in the Democratic presidential primary. Now Booker does not face one corrupt political rival, but nearly two dozen candidates, many of whom are well-liked among party voters and align with Booker on most issues.

Drawing contrasts with those rivals, while hewing to his own political compass, doesn't come naturally to Booker.

In April, a Booker campaign email to supporters implicitly criticized former Rep. John Delaney for self-funding his campaign, saying it was "something Cory just can't and would never do." Aside from the head-scratching target — why John Delaney? — the jab seemed at odds with Booker's relentlessly positive message. The candidate himself seemed to agree: Afterward, Booker insisted he didn't know anything about the email; and, moreover, he wouldn't approve of such a hit against a rival.

"We are not taking swipes at other candidates," Booker added. "The reality is, we need to have a Democratic Party that shows how you run a campaign by respecting people you're running against, and so I'm going to continue to conduct myself in that manner."

Booker's reluctance to take shots at other Democrats, at least until recently, has enabled him to maintain strong favorability in most polling. When Democratic voters are asked what candidates they would consider supporting, Booker rates among the top tier of the field.

But that has not yet translated to committed support for Booker. Now, the pressure is building for Booker to begin to convert them — a process that could begin next week, when he stands adjacent to Biden on the debate stage.

Booker "is everybody's favorite cheerleader, but he's not seen as the quarterback," Murray said. "He does need to do something to change people's perceptions."