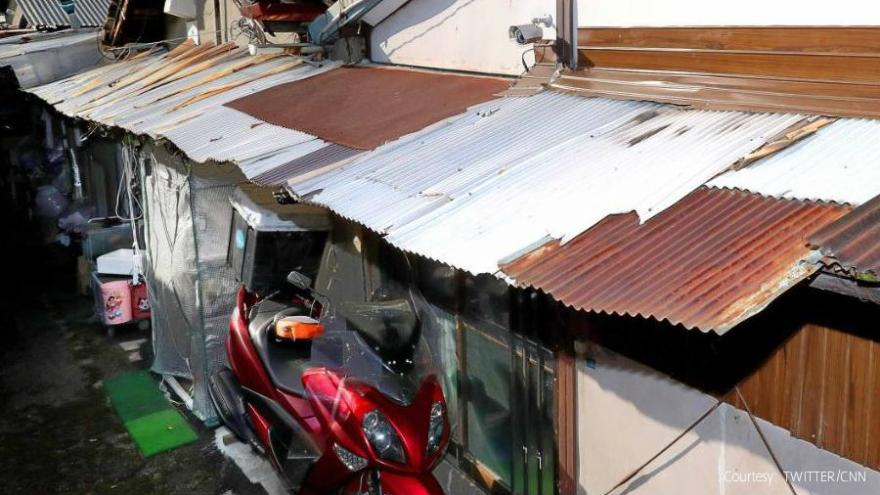 By Yoko Wakatsuki and Lawrence Davidson

(CNN) -- A couple in Japan have been arrested after their emaciated adult daughter was found dead in a windowless room where she had apparently been locked for at least 15 years.

Airi Kakimoto, 33, weighed less than 20 kilograms (42 pounds) -- about the average weight of a 4-year-old -- when her body was discovered Saturday, police said. She appeared to have died from exposure to the cold.

Yasutaka Kakimoto, 55, and Yukari Kakimoto, 53, who live in Osaka, in central Japan, kept their daughter in an unheated structure next to their house, according to police.

They had the room made and fitted with surveillance cameras, an air conditioner and a toilet, and had kept their daughter locked up from the age of 16, her father told police.

They fed her one meal a day and forced her to drink water through a tube.

The couple, who were arrested Tuesday and remain in police custody, said they confined their child because she was mentally ill and violent.

The official reason given for the arrests is abandoning a corpse. Under the law Osaka police have 23 days from the time of the arrest to decide whether to press charges. The defendants' first court appearance would occur several months after any formal charges.

Given the way the parents locked up their daughter and hid her illness, Yamamoto said it showed they were "also victims of a Japanese society" which lacks good medical and community support system for the mentally disabled.

He warned there may be "many more families who have the same kind of issues and problems as this family," but added this type of stigma is common in many other countries, not just Japan.

There have been multiple reports in Japan of parents killing their mentally ill children when caring for them becomes too much.

According to Japanese media reports, in August, a 72-year-old mother killed her 49-year-old mentally ill son, while in May 2016 an 81-year-old father suffocated his 47-year-old daughter and then killed himself in Kashiba, Nara prefecture.