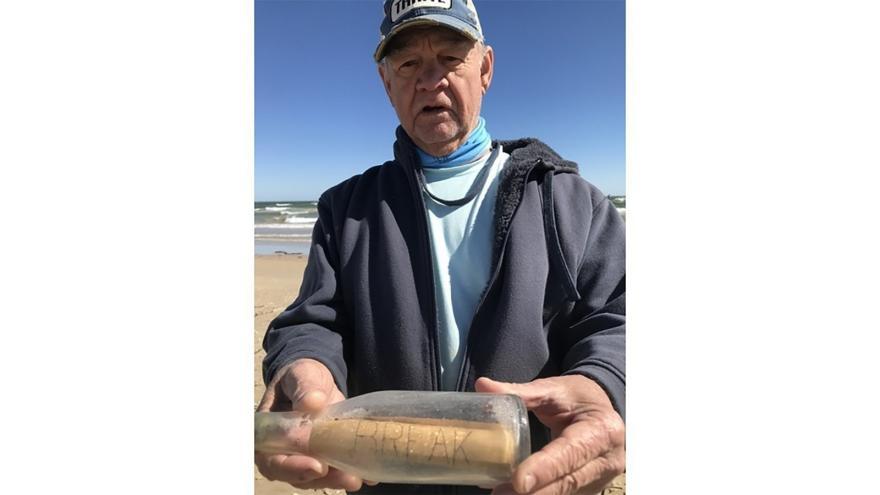 During their regular walks on the Gulf Coast beach, Jim and Candy Duke often find treasures, including bottles of various colors and sizes. This week, they found a clear glass bottle from NOAA scientists sent in the early '60s.

(CNN) -- During their regular walks on the Gulf Coast, Jim and Candy Duke often find treasures, including bottles of various colors and sizes which they post on their backyard fence.

This week, while walking on the National Seashore near Corpus Christi, the couple found a bottle with a special message.

It was one of 7,863 tossed into the ocean in 1962 by US government scientists at a lab in Galveston, Texas.

Inside was a note with large letter: "BREAK BOTTLE."

But the Dukes wanted to open the corked bottle with a wine opener. In a video broadcast on Facebook Live, Candy filmed her husband straining for several minutes against the cork that had been lodged into the bottle for half a century.

When they finally got the note out of the bottle, Candy read it aloud:

"This bottle is one of a series released at known locations in the Gulf of Mexico by scientists from the Galveston Botanical Laboratories of the US Bureaus of Commercial Fisheries.

"These releases are part of a study to determine the role that water currents play in the movement of young shrimp from offshore spawning grounds to inshore nursery grounds.

"The person finding this bottle should complete the enclosed postcard and mail it at the first opportunity."

"A fifty cent reward will be sent for each completed return," she continued. "Thank you for your cooperation and interest."

That's still not much. With inflation, the Bureau of Labor Statics values their reward as the equivalent of $4.20 today.

The Dukes filled out the form in the bottle and snail-mailed it to the address provided for the US Biological Station in Galveston.

That lab has changed names and locations but their note arrived in the office of Matthew Johnson, the current acting lab director at the National Oceanic and Atmospheric Administration's Galveston Laboratories.

Of the 1962 study, he said, "At the time, the shrimp fishery was the largest in the Gulf of Mexico, and this was the first attempt to start managing the species."

Commercial fishermen use this kind of data to set shrimp harvesting quotas, he said.

Johnson told CNN he offered to give Candy Duke the 50-cent reward, though it would cost the lab 55 cents for a stamp and $3 to print a convenience check.

The Dukes' bottle is not the first time a half-century-old drift bottle has washed up on shore.

In 2013, a man on Martha's Vineyard found a bottle with a similar message on a beach. That bottle was 54 years old and part of a separate study conducted by the Coast and Geodetic Survey.

NOAA says that survey has been using drift bottles to track ocean currents since 1846, with the last bottles being launched in 1966 off the coast of Alaska.

One of those last bottles, released during the Johnson Administration, wandered the ocean for 47 years until being found 300 miles away on the Aleutian island chain's southern coast in 2011.

Glass bottles are no longer used to study ocean currents, but the technique survives in a modern form. Johnson said "drifter buoys" perform much the same function now, and have the advantage of radio or satellite communication to talk instantaneously with scientists onshore.

"Today, they don't have to drop near as many," Johnson said.