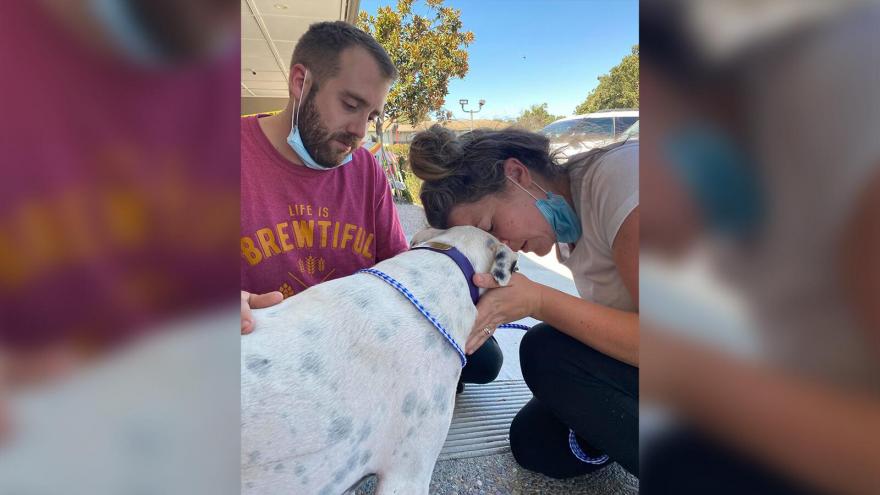 Stefanie and Duane Lindsay after reuniting with their dog, Roo, who went missing after a car accident.

(CNN) -- For Stefanie and Duane Lindsay, August 1 started out as a perfect day, filled with clam digging and playing at the beach with their 3-year-old dog, Roo. But the day turned into one of their worst after a car crash left the couple injured and Roo missing.

As Stefanie, 32, and Duane, 29, were coming back home to El Dorado Hills in El Dorado County, California, after spending the day at Bodega Bay, another driver rammed into them at 65 mph on the highway, causing their car to flip, ultimately landing upright.

"As soon as we landed, we asked each other, 'Are you OK?' And then Duane turned around not two seconds later and just said, 'Roo, Roo,'" Stefanie recalled. "He noticed that she wasn't in the back seat."

They realized that the rear window had been blown out, and the most awful thoughts flooded their minds.

"I was sure she was dead," Stefanie said. "Her being thrown out, we were sure there's no way she could've survived it."

While bleeding from his head, Duane dropped to the ground, crawling on his knees to look for Roo.

Stefanie called 911 and looked for a towel for her husband's bleeding head. Then she also started looking for their dog on the road and in the nearby grass, even if it ended up being just her lifeless body.

As emergency personnel arrived on scene, they insisted that Duane go to the hospital as he needed urgent medical attention. Firefighters and highway patrol scanned the area with thermal sensors but found nothing, so they promised the couple that they would keep searching for Roo while they got checked up at the hospital.

At the hospital, Duane was found to have a cut on the back of his head and a fractured sternum. Stefanie was seemingly OK, so she didn't need to be admitted. Unable to stay by her husband's side at the hospital due to the Covid-19 pandemic, she went back to the crash site with her parents to look for Roo. Nothing.

In the morning, the couple took to Facebook and joined all the community and animal rescue groups in Solano County that they could find. They posted details about Roo and asked if anybody had seen her. The posts garnered over a thousand likes and hundreds of shares, according to Duane.

On the ground, kind strangers joined the search as well as countless family members and friends. Even the homeless communities along the freeways and waterways were "a huge help," Stefanie said.

"The community, which we don't belong to, we had no relationship with, really came together to help us find our dog," she added.

In the end, 14 hours after the crash, it was a tip that someone posted on Facebook that led them to a neighborhood 3 miles away from the crash site. Roo was sitting under a tree in a cul-de-sac, looking "just perfectly content."

"I lost it," Stefanie said. "I fell to my knees in the middle of the cul-de-sac, wailing for her. It took her a couple of seconds to register who I was, but once she did, she just comes running to me."

Roo had suffered a bit of road rash, soft tissue damage and trauma, but considering that she was thrown out from the back window of a moving car, her parents said they couldn't be more grateful to have her back.

"It's hard to imagine what life would be without her. Luckily, we don't have to think about that for a very long time," Stefanie said.