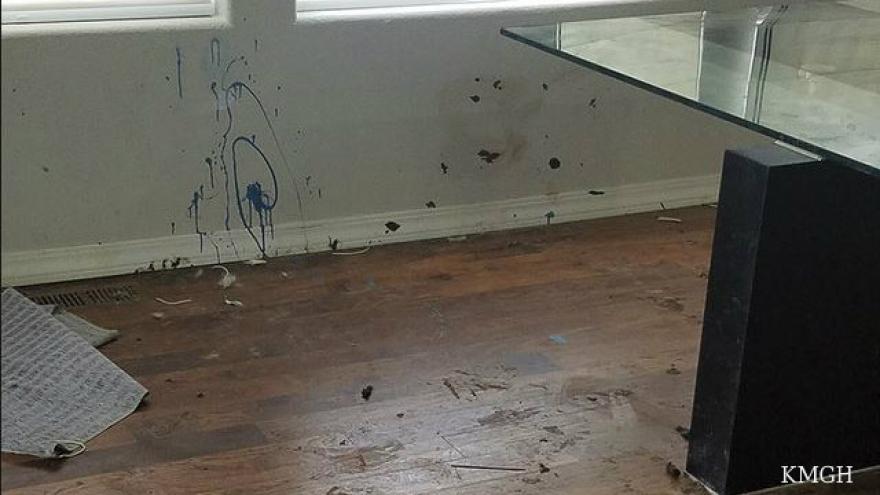 EL PASO COUNTY, Colo. (KMGH) -- You can't even step foot inside Paul and Jenny Fisch's home without wearing a breathing mask. Their dream home was destroyed after they thought the house was sold.

"I mean, there was just no words... the feces and the urine spread all over our white cabinets, all over our hardwood floor, it was even on the ceiling - 10-foot ceilings," said Jenny Fisch, the homeowner.

The Fischs put their home on the market for $450,000 and the first offer they received was for full asking price. They were elated but there was a catch, the buyers wanted to rent the home with the promise they would close in three months.

"We were told these people were 100 percent qualified, there was no question about it," said Jenny Fisch.

Everything seemed to be fine and they had no reason to doubt the offer. The realtor drafted up a contract with information about the loan and a closing date of January 31, 2018. The deadline came and went without the buyers closing on their home even though they were already living in it.

"What do we do? The only thing we have left to do is start an eviction," said Paul Fisch.

The couple even attempted to work out a new deal with the would-be buyers so they could continue renting and eventually purchase the home. The buyers stopped paying rent and they had no choice but to evict them. It wasn't a quick process.

Paul and Jenny Fisch weren't prepared for what they were about to find when they showed up to their home with a sheriff's deputy to finally kick the people out.

"When she walked out her face was like, 'it's bad," said Paul Fisch.

Floors were covered in urine, there was feces everywhere and the smell was overwhelming. The house was absolutely filthy and completely trashed.

"And I lost it, I just lost it. I was like, 'I don't understand why we have to go through this.' I mean we hired people and now my beautiful dream home is covered in feces and I don't know how we're going to fix it," said Jenny Fisch.

Contact7 started digging and it turns out the buyer was pre-approved for a loan but only if he completed a program and improved his credit score. The lender said that never happened. This information was not made available to the Fischs and they only found out after the deal fell through.

The couple said their agent and the buyer's agent assured them everything was good when they agreed to let the buyers rent. Denver7 contacted RE/MAX, the buyers realtor, but a spokesperson said realtors don't qualify buyers and it is up to the lender.

"It's their fault and nobody wants to help us," said Jenny Fisch.

The Fischs tried to filed a report with the El Paso County Sheriff's Office but they were told it was a civil matter. They also attempted to contact Child Protective Services because a child was in the home as well as animal control because seven dogs and three cats were found inside.

It gets worse. Their insurance won't cover the damage. A spokesperson for Auto-Owners Insurance said they had no comment on the situation.

Now the couple is paying a mortgage on a home they can't live in and trying to figure out how to come up with the funds to pay for repairs. The would-be buyers are nowhere to be found and Denver7 has not been able to make contact with them.

"It was insane to me how somebody could live in such a nice home and in a matter of months, destroy everything," said Paul Fisch.