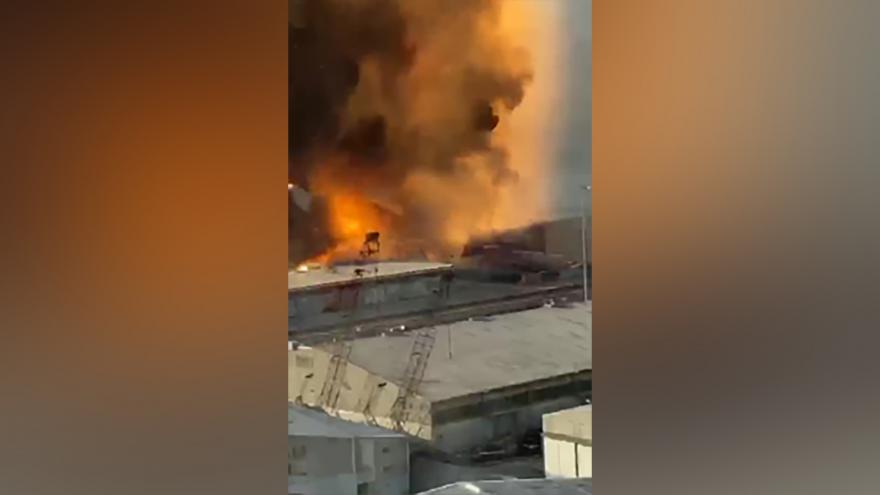 Originally Published: 06 AUG 20 21:40 ET
By Paul P. Murphy, CNN
(CNN) -- The glass and debris from Tuesday's explosion in Beirut injured Imad Khalil and Lina Alameh, but both say they are lucky to be alive.

The husband and wife now lay in a local hospital room, together, recovering from the glass and debris that tore through their apartment -- and them.

Lina needed three hours of surgery. Imad, whom Lina says was seriously injured and had to be transported down 11 flights of stairs on the back of a door, needed six hours in surgery.

They are among the thousands across Beirut who were injured in the blast. Their apartment, which they purchased only two years ago, is now almost destroyed.

It all began with what Lina says sounded like fireworks.

They say the fire at the port started small. They watched it grow from their balcony on the 11th floor. Through satellite images, CNN has calculated their apartment was roughly 640 yards -- or 585 meters -- away from the center of the water-filled crater that was left by the explosion.

At some point, they both began livestreaming video on their social media accounts.

"I told my husband there's something wrong," Lina told CNN on the phone from her hospital bed.

In her video, she is heard telling him to come inside; she remembers she felt like something bad was about to happen. Lina says Imad didn't answer her and says he looked like he was in shock by what was happening in front of them.

Then, a fireball with sparks is seen in the video. It was the first explosion, which occurred at 6:07 p.m. local time.

A large smoke cloud, which was occasionally filled with small, firework-like explosions, is seen, too. Those explosions, and the size of the flames, grow significantly as Lina's video progresses.

'All I remember is flying up in the air'

Thirty-three seconds after the first explosion, the massive second explosion happens. That explosion was at 6:08 p.m.

"All I remember is flying up in the air," Imad told CNN on the phone, from his hospital bed.

Both say they were knocked unconscious. When Lina woke up, she saw that her husband --still unconscious -- had been cut by glass all over his body and was bleeding profusely.

Lina says she had been thrown through a glass door, which broke her elbow, cut a tendon and injured her back. That's in addition to multiple cuts from the glass.

Imad was cut so severely, and in so many places, the majority of his body is bandaged. He told CNN it was easier to take a video of his injuries than to list them: he had wounds from head to feet, with severe cuts to his ankles and knees and a compound fracture of his right thigh.

Khalil transported down 10 flights on a door

When she came to, Lina says the only thing she was thinking about was whether Imad was still alive.

She remembers that when she was finally able to wake him, he told her, "I'm dying."

Lina tried to drag him toward the door, but says she wasn't strong enough. Despite her own wounds, she says she began to move down 10 flights of stairs.

She says she felt so weak, she thought she would faint again. So, she made that journey scooting on her rear end the entire time.

On the street, she found a policeman who is a friend. He and others climbed the stairs and were able to bring Imad down using a door as a stretcher.

Once on the ground, they were able to flag down an ambulance.

Their building is in ruins

In video taken on Wednesday by Lina's sister, the view from their once-gleaming apartment has completely changed. The only thing left by the explosion is catastrophic destruction.

Every window in their apartment has had the glass blown out. The kitchen and bedrooms are filled with debris and the doors have been blown off their hinges.

In their living room, debris litters the floor and a large blood stain is seen on the ground in front of their sofa.

The explosion was so powerful, that outside, the building façade of the entire port-facing side has been ripped clean off the building.