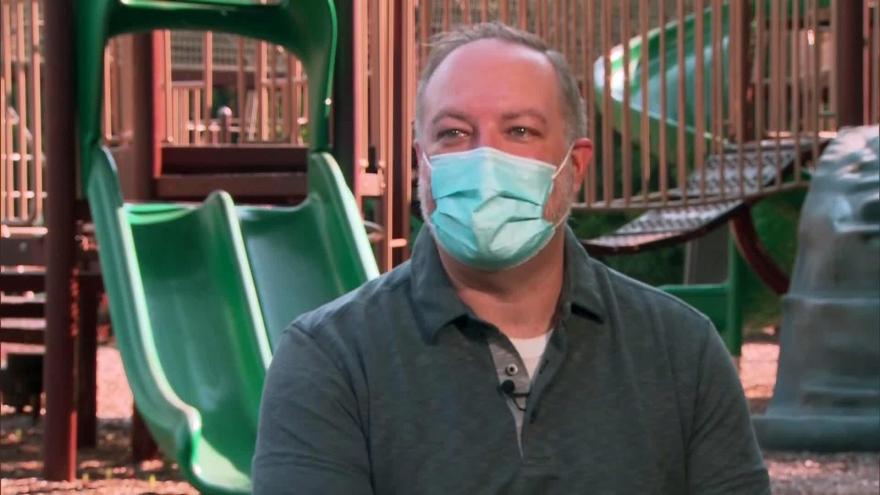 (CNN) -- It's Sunday in Woodstock, Georgia, and the local park is packed with families. It should be an ordinary sight, but father of six Jamie Chambers says, in the age of Covid-19, scenes like this keep him up at night.

"We all want it to be normal, we all want our regular lives back and I have nothing but sympathy and empathy for people who do, but we're not living in normal times," he told CNN. "And that's the thing, people are just choosing to live as if it is, until it's impossible to ignore."

The number of quarantines since schools in Woodstock and the rest of Cherokee County opened last week is just that -- impossible to ignore. At least 478 students and teachers were asked to quarantine after possible exposure to Covid-19 in the first five days of classes. By early Tuesday, that number had swelled to 925 students and staff. Nearly one-third of the district's schools -- which teach 30,000 students from elementary to high -- have been impacted.

Chambers, who fears the coronavirus will spread throughout the area, which is about 30 minutes north of Atlanta, says he saw this coming. He, along with other district parents, received a letter from Cherokee County School Superintendent Brian Hightower in mid-July announcing a 77-page reopening plan.

"One day later it was voted on, with limited opportunity for the public to participate," Chambers said of the meeting, where he said commenting and asking questions was limited to those who were able to show up last-minute. "When the committee that created the reopening plan was created there were no teachers on it and teachers were not given a chance to review it before it was published for the public."

In a statement to CNN on Wednesday, Cherokee County called Chambers' claims false.

"Attendance at the meeting in person was open to 90 citizens and was attended by 60, with half of those speaking during public participation; an additional 6,000 watched the meeting online," Barbara Jacoby, chief communications officer with Cherokee County wrote in the statement.

She added, "Two committees, one made up entirely of teachers and staff and one made up of parents, partners (Department of Family and Children Services, local hospital, foster care group home) and staff, gave input on the plan recommended by the Superintendent."

Chambers became a well-known local activist after he wrote an open letter to the superintendent blasting the reopening plan.

"I see little evidence that guidelines from (the US Centers for Disease Control and the Department of Health) were a guiding factor in creating these policies. In fact, your plan seems to repeatedly soften or ignore their recommendations altogether while seeming to envision a 'best case scenario' when it comes to young people complying with these changing rules and the teachers' ability to monitor and enforce them," wrote Chambers, a game designer.

Parents and students told CNN that rules and guidance for social distancing and mask-wearing are not always put in practice. Chambers believes students going in-person are at risk and is keeping his 10-year-old and 4-year-old at home.

On Tuesday, Hightower told parents Etowah High School in Woodstock would have close to in-person learning from the end of the day until at least August 31. There have been 14 positive coronavirus cases at the school, he said, with tests pending for another 15 students. Some 294 students and staff have been asked to quarantine.

Hightower urged people to social distance and wear masks. "As your Superintendent, I wear a mask whenever I cannot social distance. We know all parents do not believe the scientific research that indicates masks are beneficial, but I believe it and see masks as an important measure to help us keep schools open," he wrote to parents.

Requiring masks is a decision that is being left up to individual schools in Cherokee County. Across Georgia, Gov. Brian Kemp has encouraged mask-wearing but ruled out any mandates and says he supports local decision-making.

A little north of Woodstock, Brandy Heath thought that sending her fourth and sixth graders back into classrooms at Freedom Middle and Liberty Elementary in Canton was definitely the better option for their learning.

"I sent my son to face-to-face learning because, as any parent knows, school is the best place for our children. Their teachers are educated, and they can teach things to our kids that we can't," she told CNN.

"However, the second day of school my son said to me, 'Mom, I'm not feeling safe. We're not social distancing, there's no precautions being taken to keep us safe,'" Heath told CNN of her fourth grader.

As soon as she heard that, Heath, who says she is immuno-compromised, pulled her kids back home for distance learning.

"We expected the Cherokee County School District to keep our kids safe. To take precautions that ensure their safety. And it's not being done," she said.

Back on the playground in Woodstock, Jamie Chambers said he feels sometimes like he's fighting a losing battle. In this deeply conservative part of Georgia, he says politics continue to be put before science, with even some school officials telling staff that they believe the coronavirus is a hoax, he said. District spokeswoman Jacoby emailed CNN to say it was "false" to say any officials had said Covid was a hoax to staff.

Some of the parents at the park appeared less concerned about the virus.

"I don't regret sending my kids to school," the mother of a fourth and fifth grader, who declined to give her name, told CNN. "They're either going to get the virus in school or outside of school, might as well send them back."

This story has been updated with a statement from Cherokee County. It also clarifies that while anyone could watch Cherokee's meeting on the school reopening plan, only those present could speak or ask questions. It further clarifies that parents and students say social distancing and mask wearing is not always happening. Jacoby's comment that it was "false" to say officials had told staff they believed coronavirus was a hoax has also been added.