Covid-19 numbers are dipping in the US, even as variants are lurking and the vaccine rollout lags 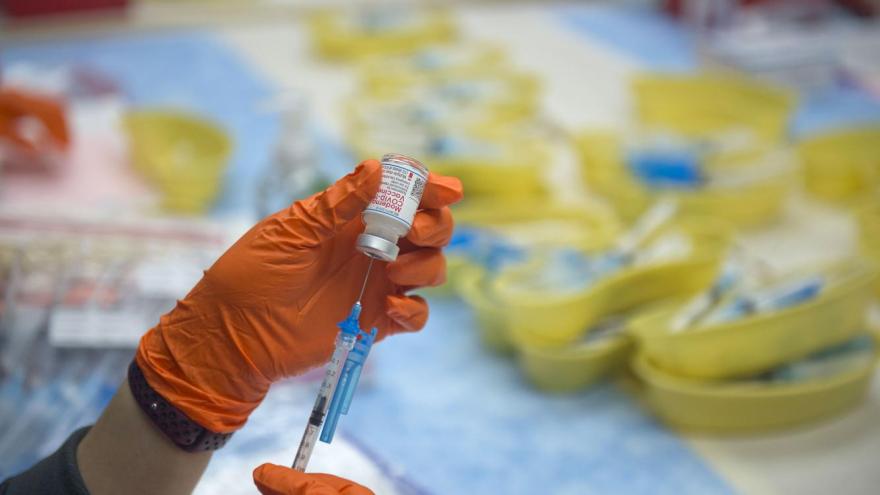 A healthcare worker prepares a dose of the Moderna Covid-19 vaccination at a drive-thru clinic at the Richard M. Borchard Regional Fairgrounds in Robstown, Texas, U.S., on Tuesday, Jan. 26, 2021.

(CNN) -- Make no mistake: The United States still is at one of its worst spots of the coronavirus pandemic. Daily deaths are near a peak, and other daily stats still are stunningly high compared to where they'd been before a late 2020 surge.

Yet Covid-19 case and hospitalization numbers have been falling. Vaccines are here, more versions may be near and warmer weather is approaching.

Some health experts say the US even has a chance to experience life a little more normally by early fall. Infectious disease expert Dr. Anthony Fauci made that prediction last week, assuming 70% to 85% of the US population was vaccinated by end of summer.

Standing in the way are lagging daily inoculation rates, vaccine supply shortages and hesitation by some to get the shots. And variants of the virus that appear to be more transmissible are turning up more frequently, according to the US Centers for Disease Control and Prevention, which warns they could worsen the already raging spread of the virus.

Still, President Joe Biden's administration says it has taken steps to hasten vaccinations. And experts including Fauci are optimistic that current vaccines will largely protect against known variants, though they warn the more the virus spreads, the greater chance mutations could defeat current vaccines.

So, as the nation waits for widespread vaccines, the steps people should take to slow the spread are the same as always: wear masks, avoid congregate settings and wash hands, experts have said.

Covid-19 numbers are on a downswing

• New daily recorded cases in the US are falling. Health experts had warned that the November-December holidays, with boosts in travel and indoor gatherings, would send Covid-19 cases soaring.

And soar they did, reaching a pandemic-record average of more than 249,200 cases a day across a week as of January 10, according to Johns Hopkins University data.

And the country has reported fewer than 200,000 new cases a day for 10 straight days -- the longest such stretch since before Thanksgiving.

• Hospitalizations are falling: About 108,950 Covid-19 patients were in US hospitals on Tuesday -- a number generally dropping since a pandemic peak of 132,474 patients recorded January 6.

The statistic is now about where it was just before mid-December, according to the COVID Tracking Project.

• Deaths reported per day are hovering just under a record: The country averaged 3,349 Covid-19 deaths a day across a week as of Tuesday.

That's very close to a pandemic peak average of 3,355 reached on January 13 -- and far ahead of the averages around 1,000 just in mid-November.

Experts have said movements in the volume of deaths can lag weeks behind case and hospitalization numbers, because those who succumb to the disease can first be sick for weeks.

January already is the United States' deadliest month of the pandemic. But a model run by the University of Washington predicts these numbers should dive over the next few months.

The Institute for Health Metrics and Evaluation model predicts the daily death toll could be under 1,850 by March 1, under 750 by April 1, and under 300 by May 1.

But vaccinations, too, "will prevent a lot of death," Murray said.

Scientists are watching several known coronavirus strains believed to be more transmissible than previous versions. That includes one first identified in the UK (B.1.1.7), one first seen in Brazil (P.1) and one seen in South Africa (B.1.351).

Researchers also are eying a variant found in California, Fauci said Monday, though it is unclear if it is more transmissible.

The B.1.1.7 strain could become the United States' predominant variant in March and has the potential to "increase the US pandemic trajectory in the coming months," the CDC said in a report this month.

"We've seen what happens in other countries that have actually had coronavirus under relatively good control, then these variants took over and they had explosive spread of the virus, and then overwhelmed hospitals," Wen told CNN Monday.

'Get as many people vaccinated as quickly as you possibly can'

One obvious way to combat these variants -- and to lessen the chances of more-dangerous mutations from occurring -- Fauci has said, is to get vaccinated.

"The best way you prevent the evolution of mutants is to suppress the amount of virus that's circulating in the population. And the best way to do that is to get as many people vaccinated as quickly as you possibly can," Fauci told CNN on Monday.

Fortunately, Fauci said, current Covid-19 vaccines are likely to be effective against the new variants.

Evidence indicates the effectiveness of vaccine-induced antibodies might be diminished against the mutant first seen in South Africa, but "it's still well within the cushion-range of being an effective vaccine," Fauci said.

Moderna and Pfizer both say experiments indicate their vaccines will protect people against the new variants. And even though it believes its current two-dose vaccine will be effective, Moderna said it would develop a potential booster shot against this variant, just to be safe.

If the US were to administer 1 million shots per day -- the pace required to meet Biden's initial goal of giving 100 million shots in his first 100 days in office -- it would take until the end of 2021 to fully vaccinate 75% of US adults, assuming every recipient needs two shots, according to a CNN analysis.

The country may be close to that pace now. Biden said Monday he hoped to eventually increase the pace to 1.5 million shots a day. The time frame also would shrink if some people get one-dose vaccines, such as the candidate from Johnson & Johnson, which is expected to reports result of its Phase 3 trials soon.

The World Health Organization, meanwhile, has stressed that rich nations need to do more to ensure vaccines are available worldwide. That's not only for moral reasons but also because dangerous mutations could emerge in places where people are not vaccinated in sufficient numbers -- and end up sickening people already vaccinated.

"A me-first approach leaves the world's poorest and most vulnerable people at risk. It's also self-defeating," WHO Director-General Tedros Adhanom Ghebreyesus said Wednesday.

The steps people should take to fight variants and get the country closer to normal while waiting for vaccines follow the now-familiar roadmap of pandemic precautions, from wearing masks to avoiding crowds to basic hand-washing.

New strains put "a lot of pressure on us to try (to) do everything we can to get transmission down," Dr. Richard Besser, former acting director of the CDC, said Tuesday.

"Vaccines are part of that, but the biggest part of that is trying to come together as a nation and see: Can we get those people who aren't wearing masks to do so? Can we get people to social distance and avoid crowded indoor places?" he said

"If we can do those things, we can blunt the impact of the pandemic this winter."

Biden last week signed an executive order requiring masks in federal buildings and on federal lands, and asked Americans to wear masks for his first 100 days in office.

France, Germany and Austria, concerned about more-transmissible variants, have made medical-grade face masks mandatory in at least some public places.

While some experts in the US are calling for a nationwide rollout of N95 respirators and high-filtration surgical masks, the CDC currently says they should be reserved for health care personnel, partly due to a shortage of them.

The CDC currently recommends the general public use washable cloth masks or single-use non-medical disposable masks. Masks should have two or more layers of fabric that fit snugly over the nose and mouth, it says.

"I am hopeful that by late spring into early summer, life will begin to feel really meaningfully different and better," he said.