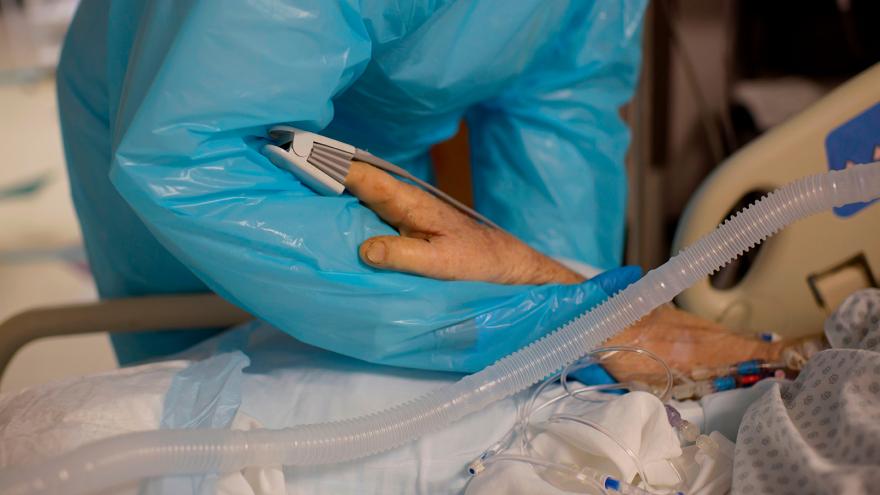 (CNN) -- A US Centers for Disease Control and Prevention advisory committee voted Saturday to recommend the Pfizer and BioNTech Covid-19 vaccine for patients 16 and older, a day after the US once again saw a record number of new cases, deaths and Covid-19 patients in hospitals.

CDC Director Dr. Robert Redfield must accept the Advisory Committee on Immunization Practices' recommendation before vaccinations can begin. That is expected to happen within hours.

The vaccine couldn't come at a more dire moment.

On Friday, as the US Food and Drug Administration authorized the Pfizer vaccine for emergency use, the US recorded more than 3,300 Covid-19 deaths -- the most ever in one day, according to data from Johns Hopkins University. More than 231,700 new cases were reported, another pandemic high.

Andfor at least the sixth day in a row, the US reported another record high number of Covid-19 patients in US hospitals: more than 108,000 nationwide, according to the Covid Tracking Project.

"We are having this mass casualty event every day here in the US," CNN medical analyst Dr. Leana Wen told CNN's Chris Cuomo moments after the FDA'sauthorization was announced Friday evening. "But now we have this vaccine developed in record time that can, in time, really save us and save our country and save the world from this awful pandemic."

"This is really a monumental moment for us," added Wen, an emergency medicine physician.

Vaccines will be delivered to 145 facilities on Monday

The emergency use authorization (EUA) is a "significant milestone," FDA Commissioner Dr. Stephen Hahn said in a statement Friday. He said it comes after an "open and transparent review process that included input from independent scientific and public health experts and a thorough evaluation by the agency's career scientists."

An EUA stops short of a full approval. Pfizer would have to file a separate application for its vaccine to be fully licensed by the FDA.

But the EUA "holds the promise to alter the course of this pandemic in the United States," said Dr. Peter Marks, director of the FDA's Center for Biologics Evaluation and Research.

"We expect 145 sites across all the states to receive the vaccine on Monday, another 425 sites on Tuesday, and the final 66 sites on Wednesday, which will complete the initial delivery of the Pfizer orders for the vaccine," Perna added.

But it will be months before most Americans will get one. Advisers to the CDC have recommended health care workers and long-term care facility residents be first in line.

In a news conference Saturday morning, Hahn praised FDA scientists working around the clock to review the vaccine.

"I will absolutely take this Covid-19 vaccine pending availability and distribution," he said, "because I have complete trust and confidence in the FDA's career staff's evaluation."

"Science and data guided the FDA's decision," he said.

That said, the FDA's "work evaluating the Pfizer-BioNTech vaccine does not end with this authorization," Hahn told reporters.

Additional review is needed, and a full approval is not expected for months.

Officials "remain confident," he added, that there will be enough doses for any American who wants to get vaccinated by summertime.

In the meantime, the US -- ravaged by a rampant spread of the virus -- is projected to face brutal days ahead, and precautions like masking and social distancing will remain crucial.

Overburdened hospitals across the US

The average of daily cases over the last week was 210,764, another pandemic high, according to a CNN analysis of Johns Hopkins data.

Some communities have already begun feeling the impacts of Thanksgiving gatherings and travel -- which officials predicted would lead to even more infections and drive another surge. And that surge could be followed by another surge tied to the upcoming Christmas holiday, some officials have said.

Hospitals in nearly every corner of the country have felt the impact. HHS data shows more than 85% of hospitals nationwide had more Covid-19 patients last week than they did a month ago and overall, about one in five hospital inpatients were confirmed to have Covid-19 last week -- nearly double from a month earlier.

In the country's 10 largest cities, the share of hospital patients who had the virus ranged from about 9% in New York to 23% in Chicago. Meanwhile in El Paso, Texas, more than 50% of patients in city hospitals had Covid-19 between November 27 and December 3. That's nearly double the national average for that period.

As of Friday, the average number of daily deaths over the previous seven days was 2,359, the highest since the pandemic began.

The next three months will be "really rough," CDC's director warned, even with a vaccine becoming available soon.

"For the next 60 to 90 days, we're going to have more deaths per day than we had in 9/11," Dr. Robert Redfield said Thursday. "This is going to be a real unfortunate loss of life, as all that we've had so far."

And it's a reality that a vaccine authorization won't impact, he added.

In California, Los Angeles County Public Health Director Dr. Barbara Ferrer gave a grim warning about the coming weeks, after announcing the county has doubled its number of new cases in about 10 days.

"The issue right now is what we call the Thanksgiving surge," Ferrer said. "We had a surge, and now we have a surge on top of a surge, and it's really hard for us to calculate exactly what we're going to see in the next week or two."

"We're on a very dangerous track to see unprecedented and catastrophic suffering and death here in L.A. County if we can't stop the surge," Ferrer said.

FAA urges all airports to be ready for vaccine flights

According to an FDA briefing document, however, "there are currently insufficient data to make conclusions about the safety of the vaccine in subpopulations such as children less than 16 years, of age, pregnant and lactating individuals, and immunocompromised individuals."

On Saturday, the FDA's Dr. Marks said decisions about whether pregnant women should take the vaccine should be considered on a case-by-case basis.

"Covid-19 is not a good thing, so someone might decide that they would like to be vaccinated, but that's not something that we're recommending at this time," Marks said. "That's something we're leaving up to the individual."

Meanwhile, the Federal Aviation Administration has urged airports nationwide to be ready for flights carrying the Covid-19 vaccine even if the airport is not scheduled to receive it.

The agency told CNN Thursday it would direct air traffic controllers to give priority clearance to flights carrying the vaccine.

States will receive shipments of Pfizer's Covid-19 vaccine once a week to begin with after the shots are rolled out, Operation Warp Speed Chief Adviser Moncef Slaoui said Friday.

"The plan is to ship vaccines once a week and to inform the governors a week in advance about the number of doses they will be receiving," Slaoui told CNN. "Those vaccines ... are meant to be used in full in the population during that period of a week because the same states will receive an identical number of doses in the case of Pfizer's vaccine three weeks later to give as a second dose to give to the recipients of the first dose earlier," he said.

The number of vaccines will increase "week on week," he added, as manufacturing ramps up.

And if the vaccine under development by Moderna is authorized, he said, "that would be quite a significant boost of vaccine to be distributed." Vaccine advisers to the FDA will meet next week to discuss an EUA for Moderna's vaccine.