Covid-19 testing: A spike in demand, a delay on results 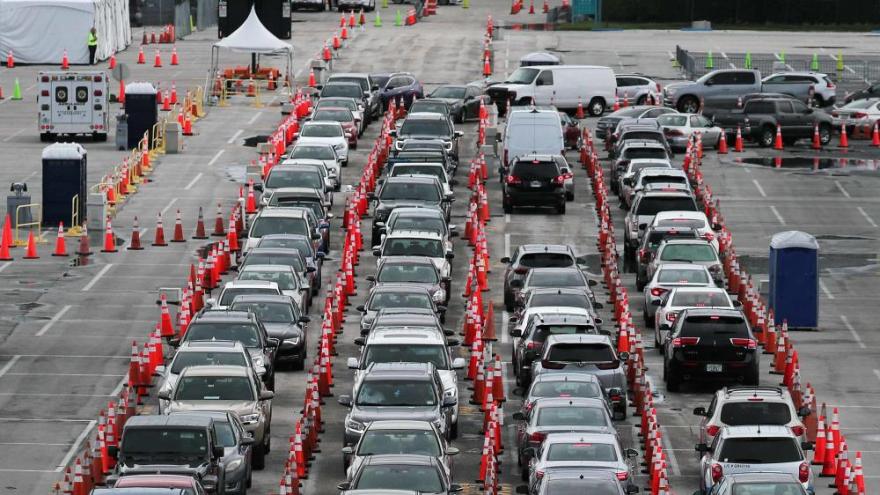 As Covid-19 cases in the US spike, some states, labs and public health departments are warning that turnaround times for diagnostic testing have slowed.

(CNN) -- As Covid-19 cases in the US spike, some states, labs and public health departments are warning that turnaround times for diagnostic testing have slowed.

The challenges, which stem in part from persistent obstacles in the test supply chain, underscore that while overall US testing capacity has multiplied, the nation's health system still struggles in some regions to rapidly detect the spread of the virus.

In response to the surge in cases, the Department of Health and Human Services announced on Tuesday the launch of new testing sites in three hotspots -- Jacksonville, Florida; Baton Rouge, Louisiana; and Edinburg, Texas. The sites will offer 5,000 free tests per city each day on a temporary basis, according to an HHS news release.

Despite federal efforts to support testing in some cities and regions, three major diagnostic companies -- Quest Diagnostics, LabCorp and BioReference Laboratories -- said this week that the growing demand for tests have in turn increased average wait times for delivering results.

Quest said results now take an average of four to six days for the general population, much longer than the turnaround time in early June when the company was producing results in two to three days. The company said tests for hospital patients and symptomatic health care workers are prioritized and take one day on average. Quest cited "unprecedented demand," especially in the South, Southwest and Western regions of the country where coronavirus cases are spiking.

A spokesperson for LabCorp told CNN Monday that its tests are taking about two to four days to come back. Before the increase in demand, LabCorp says it had been delivering coronavirus test results on average between one and two days.

BioReference is now delivering results in about three days. Quest, LabCorp and BioReference said they plan to increase their testing capacity.

US Assistant Secretary for Health Adm. Brett Giroir acknowledged Tuesday that wait times for test results at commercial labs are generally increasing, though he said the US is now doing an "unprecedented" level of tests and is averaging more than 600,000 per day.

He said test turnaround times for tests in Montana and Washington DC, are averaging four to five days, whereas other states have shorter average waits.

"We did anticipate that the lab capacity would at some point in time come close to reaching a max. I'm not saying it's at a max now, but we are certainly pushing the frontiers," said Giroir, who emphasized that while testing is an essential component of the fight against the virus, it's not the most important.

"The most critical factor is going to be personal discipline. It's the physical distancing, wear a mask, avoid crowds," Giroir said.

Giroir said greater availability of rapid, "point of care" tests in coming months should lower the burden on some laboratories. He said he expects that by August or September the point-of-care test market will grow to 10 to 20 million tests per month, though he said such tests are slightly less sensitive than lab-based tests. Multiple studies have raised questions about the accuracy of one such rapid test the White House has used.

While some state health departments, such as those in Georgia, Indiana and Maryland, told CNN their states have sufficient testing supplies, others said access to certain supplies remains constrained.

Labs in Idaho have faced "substantial issues" purchasing equipment and obtaining regular allocations of testing reagents, the chemicals used to detect the presence of the virus in a sample, said Dr. Christopher Ball, chief for the Idaho Bureau of Laboratories.

Ball said testing availability varies widely by region in the state, which he said can affect turnaround times for results and who is prioritized for testing.

A spokesperson for the Michigan Department of Health and Human Services told CNN last Tuesday the state is still working through shortages in supplies including test kits, which have in turn caused some labs and health care providers to restrict who is eligible for testing.

Kelly Wroblewski, the director of infectious disease programs for the Association of Public Health Laboratories, which represents state and local public labs, told CNN labs are generally managing with supplies but "it is very tight."

"There are periodic shortages or delays in very specific components of different tests but not the same wide spread true shortages that we saw earlier," said Wroblewski, referring to challenges earlier this year.

On Tuesday, five Democratic members of Congress representing Arizona sent a letter to HHS and the Federal Emergency Management Agency that requested assistance due to "dangerously limited" testing access in their state.

The letter said Arizonans have reportedly waited in line for up to 13 hours for a test and as long as three weeks for results.

Phoenix Mayor Kate Gallego has described the situation as a "crisis." Gallego, who spoke to ABC News on Sunday, said her office asked FEMA to setup large-scale community-based testing in her city but was told the agency was "moving away from that."

A FEMA regional administrator, Bob Fenton, said in a statement that he spoke to Gallego and connected her with state health and emergency management leaders to remedy her concerns. He said FEMA and HHS have provided Arizona with hundreds of thousands of individual testing supplies, and that federally supported community-based testing sites have expanded.

Dr. Anne O'Keefe, a senior epidemiologist for the Douglas County Health Department in Omaha, Nebraska, said a testing site in the city has remained closed since Saturday due to a lack of supplies, including pipettes, which are tools for transporting liquids.

O'Keefe said she understands that some supplies have been prioritized for other parts of the country with higher case counts, but she said, "We might not be in one of the surging states right now ... but we still have a lot of coronavirus here."

A spokesperson for Florida's Joint Information Center on Covid-19 said Tuesday that there are 47 state-supported testing sites in the state, that testing capacity is expanding and that results are often available three days after labs receive test samples.

But Brooke Straub, a resident of Tampa, Florida, said she has been waiting more than a week for her test results.

Straub said she decided to get tested after her throat started to feel sore two weeks ago. She said she was told no appointments were available at a drive-through site in her county until the following week. When she was finally tested last Tuesday, she had to wait three hours and was told she should expect the results in five to 10 business days.

"The fact that it's 14 days out from the onset of symptoms doesn't do me a whole lot of good," Straub said.