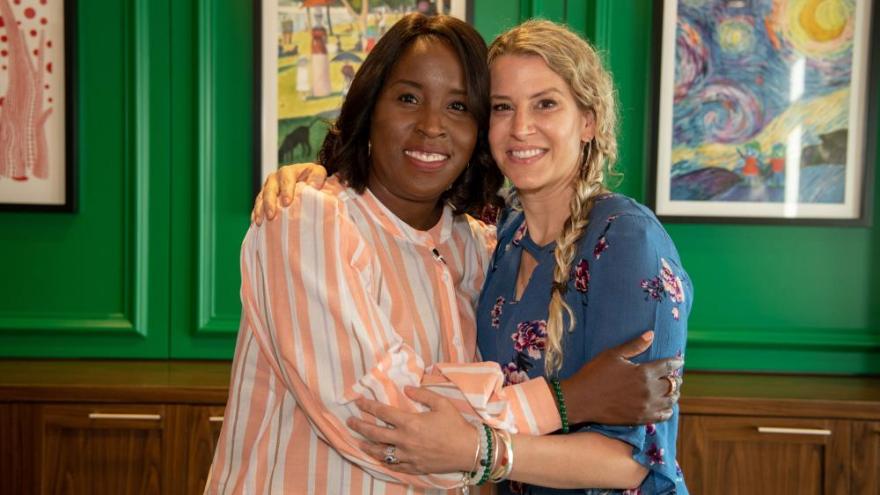 Tia Wimbush, left, and Susan Ellis donated their kidneys to each other's husband.

(CNN) -- When longtime coworkers Tia Wimbush and Susan Ellis passed by each other at work, they would smile politely and say hello, oblivious to the fact that they'd one day team up to save their husbands' lives.

Both men were suffering from kidney disease and in desperate need of transplants.

The women, who worked together in the IT department at Children's Healthcare of Atlanta for 10 years, didn't know about their shared struggle. But after finding out in 2019, they quickly became friends and confidants, sharing the good and the bad that came with their emotional journeys.

But then a five-minute bathroom conversation last September changed everything.

As they washed their hands and casually discussed the donor process, Wimbush looked at Ellis and asked her husband's blood type.

And Ellis, blood type A, was a match to Wimbush's husband -- type AB.

"All that was going through my head is, 'What if we can donate our kidneys to each other's husbands?' I could have never imagined it," Wimbush told CNN.

Wimbush returned to her desk and called her donor coordinator to begin the process of confirming that the pair were a match for their spouses.

A race against time

For Rodney Wimbush, Tia's husband, what was supposed to be a typical school day became the day he discovered his kidneys were failing him. In August 2019, the school teacher and coach went to the nurse's office because he wasn't feeling well. She found his blood pressure was dangerously high and immediately sent him to the emergency room.

"It was extremely emotional," Tia said. "Within an hour of running tests, they started saying things like, 'Has anyone ever mentioned kidney failure to you?' And we were like what's happening? What are you talking about? What does this mean for us?"

That day, he was diagnosed with kidney failure and chronic kidney disease. He started undergoing regular dialysis to help him survive.

Lance Ellis, Susan's husband, was diagnosed with kidney disease in 2010. After receiving a kidney transplant from his mother in 2017, he hoped the worst was over.

But Lance suffered kidney complications before going back into renal failure in August 2019, when his body began rejecting his mother's kidney. Coincidentally, it was only days after Rodney's diagnosis with kidney failure.

Lance was back to square one, undergoing dialysis to keep from dying.

By 2020, both men were put on the transplant list, which has an average wait time of at least five years, according to the American Kidney Fund. Unfortunately, not all patients live that long.

As their husbands struggled, Tia and Susan raced the clock, attempting to find kidney donors before the disease took their husbands' lives.

"There was always the fear of the unknown, the fear of the worst-case scenario that's looming," Tia said. "We just never knew what could happen in just a single moment."

The start of a new chapter

Shortly after discovering they could be matches, Tia and Susan underwent blood type and antibody tests that confirmed it.

Tia also ended up being a match for her husband, but she and Rodney made the decision to continue with the paired exchange to help save Lance, who struggled to find a donor due to his rare blood type.

On March 19, 2021, the four friends underwent surgery at Piedmont Hospital in Atlanta. Tia gave Lance her kidney, and Susan gave Rodney hers. All four surgeries went smoothly -- and Lance's and Rodney's bodies accepted their new kidneys.

"It is very rare for two immunologically incompatible pairs to propose their own paired exchange and actually be a match for one another," Christina Klein, a transplant nephrologist at Piedmont Atlanta Hospital, said in a statement. "I have been a transplant nephrologist since 2008 working in active living donation and paired kidney exchange programs, and I have personally never seen this happen before."

Since the kidney exchange, the couples have grown closer.

"It's beyond friendship. They really are family," Tia said. "We all took a leap of faith in doing this and now we are forever connected, always rooting each other on in both the recovery process and in this second chance of life."

Lance said he felt the same. "The Wimbushes are our family and are the best people we have ever met. We are looking forward to spending time together and making new healthy memories," he said.

After a few months of healing, the two women returned to work on May 17. They were welcomed back by a crowd of cheering colleagues, most of them in tears, according to Children's Healthcare of Atlanta, which shared a video of the moment on Facebook.

Tia and Susan hope that by sharing their story, others will be inspired to become donors -- or at least be a little kinder to one another.

"I'm forever changed. I'm hopeful for humanity and I hope other people will take that away from this story," Tia said. "You can be somebody else's hope, it could be you to show someone a glimpse of what humanity really means."