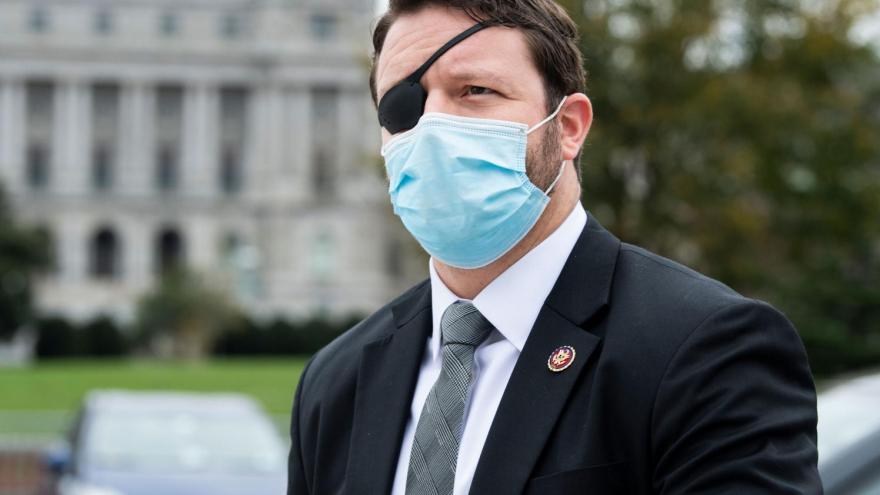 Republican Rep. Dan Crenshaw, seen here at the US Capitol on December 4, 2020, says Saturday he'll be 'effectively blind' and 'off the grid' for weeks after emergency eye surgery.

(CNN) -- Republican Rep. Dan Crenshaw announced Saturday that he will be "effectively blind" and "off the grid" for the next few weeks after undergoing emergency surgery Friday on his left eye.

"I am sorry to inform everyone that I will be pretty much off the grid for the next few weeks," the Texas congressman wrote in a statement, adding that he underwent surgery at Michael E. DeBakey VA Medical Center in Houston to re-attach his retina, which went well but that he "will be effectively blind for about a month."

Congress returns to Capitol Hill next week, and Crenshaw said his offices in Washington and Houston will continue to operate while he recovers.

On his third deployment as a US Navy SEAL in 2012, Crenshaw lost his right eye after he was hit by an IED blast in Afghanistan. That blast also caused a cataract, excessive tissue damage and extensive damage to his left retina, he said. Crenshaw recovered and ultimately deployed twice more before he was medically retired in 2016.

In his statement Saturday, Crenshaw said he noticed some "dark, blurry spots" in his vision a few days ago and went to see an ophthalmologist on Thursday, who diagnosed him with a detaching retina.

"This is a terrifying prognosis for someone with one eye, and the nature of the injuries that I sustained in Afghanistan. Anyone who knows the history of my injuries knows that I don't have a 'good eye,' but half a good eye," he said in his statement.

Crenshaw said surgeons placed a "gas bubble in my eye, which acts as a bandage for my retina," meaning he will have to be "face-down for the next week or so, unable to see anything." He noted that he likely will not conduct interviews nor post on social media, except to provide updates on his health and recovery.

The congressman remained optimistic in his statement, saying: "I have gotten through worse before, and I will get through this."