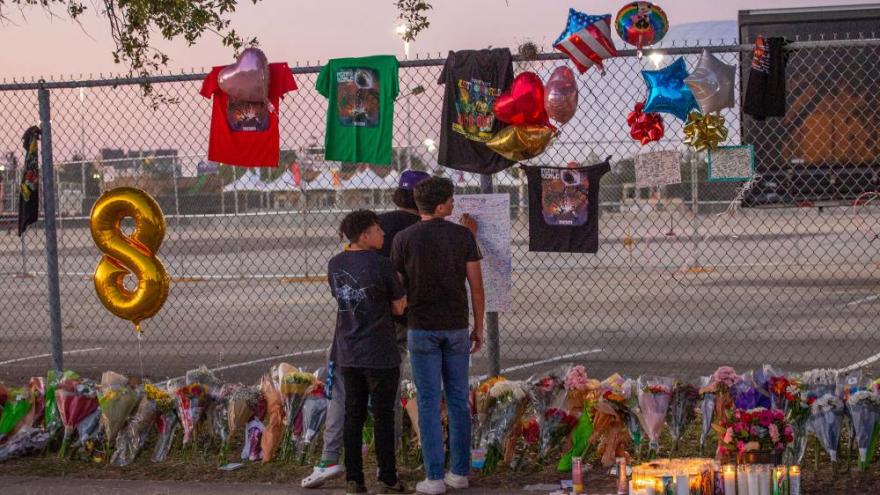 Concert attendees Isaac Hernandez and Matthias Coronel watch Jesus Martinez sign a remembrance board at a makeshift memorial on November 7, 2021 at the NRG Park in Houston.

(CNN) -- Before rapper Travis Scott took the stage Friday night at his sold-out Astroworld Festival, Houston's police chief had a "brief and respectful" meeting with him to discuss safety concerns.

"I met with Travis Scott and his head of security for a few moments last Friday prior to the main event," Chief Troy Finner said in a written statement posted Monday.

"I expressed my concerns regarding public safety and that in my 31 years of law enforcement experience I have never seen a time with more challenges facing citizens," including a pandemic and nationwide social tension, Finner said.

"I asked Travis Scott and his team to work with HPD for all events over the weekend and to be mindful of his team's social media messaging on any unscheduled events."

The chief's statement did not mention any response. The meeting was first reported by The New York Times. CNN has reached out to Scott's representatives for comment.

The concert devolved into a catastrophe after a crowd surge among the 50,000 fans ended with eight people dead.

A civil lawsuit already has been filed against Scott, who organized the festival, along with promoter Scoremore and entertainment company Live Nation.

And authorities are investigating whether any criminal charges will be filed.

That investigation "will take probably weeks, if not longer," Mayor Sylvester Turner said.

He said it "will be looked at from many different angles ... as it should be."

Houston Fire Chief Samuel Peña told CNN's Jake Tapper that organizers had hired a private company to provide the medical services component but the fire department had prepositioned units based on their experience with other large events, including the 2019 Astroworld Festival, in which three people were trampled and hospitalized.

Fire units responded, he said, as soon as the communications from the event staff indicated they were being overwhelmed.

What the criminal investigation could include

It's not clear how much the police chief's meeting with Scott about safety concerns might play into the criminal investigation, Rodgers said.

"One of the keys is whether what happened is reasonably foreseeable," she said. "If you're told about a risk in advance, that makes it much more foreseeable."

However, "it's likely not (Scott's) job to keep an eye on those sorts of things," Rodgers said. "If he saw something that was happening, he had a duty to stop the show."

Determining what Scott knew about the situation in the crowd -- and whether he acted appropriately -- will be important parts of the investigation, Rodgers said.

How people could suffocate in outdoor crowds

Witnesses described harrowing scenes of people crushed or trampled as the music drowned out calls for help.

The causes of death for the eight people who died have not been released.

But emergency physician Dr. Esther Choo said it's possible people can suffocate even at an outdoor event.

"As crowds get more tightly packed together, it doesn't take much for what's happening in one place to kind of ripple through the crowd," Choo said.

And as more people get packed, "compressive forces actually prevent you from breathing."

"It doesn't really matter if you're indoors or outdoors. What matters is that bodies can get packed in very quickly," Choo said. "If your chest wall doesn't have room to expand, you can't get that air in."

"The crowd, for whatever reason, began to push and surge towards the front of the stage, which caused the people in the front to be compressed," the fire chief said. "They were unable to escape that situation."

This year's festival had a substantial increase in security, the mayor said, including more than 500 Houston police officers and more than 700 private security personnel.

A detailed operations plan for the music festival didn't include a specific contingency for a surging crowd incident.

In a 56-page document obtained by CNN, concert organizers addressed broad concerns about the event. Among the scenarios addressed in the plan are incidents involving an active shooter, severe weather and a possible riot or civil unrest.

Live Nation staff have met with authorities and said in a statement that they have provided them with closed-circuit video, adding that all loadout work on the site has been paused to allow for investigators to "walk and document the grounds," and that refunds will be given to all those who purchased tickets.

The entertainment company said staff are "working on ways to support attendees, the families of victims, and staff" by providing mental health counseling and will help with hospital costs.

Lawsuits filed against organizers and promoters

A concertgoer has filed suit against Scott, Live Nation and concert promoter Scoremore, seeking more than $1 million for injuries sustained at the show.

Manuel Souza "suffered serious bodily injuries when the uncontrolled crowd at the concert knocked him to the ground and trampled him," the lawsuit said, which CNN obtained from Souza's law firm, Kherkher Garcia.

"Defendants failed to properly plan and conduct the concert in a safe manner. Instead, they consciously ignored the extreme risks of harm to concertgoers, and, in some cases actively encouraged and fomented dangerous behaviors," the lawsuit said.

At least 17 other lawsuits have been filed, according to court documents obtained by CNN.

One alleges that as the crowd surged toward the stage, many people begged security guards hired by Live Nation for help but were ignored.

"We're actually working right now to identify the families so we can help assist them through this tough time," the rapper said.

Live Nation was named as a defendant in all but one of the lawsuits while Scott was named in most. Other people and organizations involved in the concert, including NRG Stadium and rapper Drake, were named in at least one of the suits.

The one lawsuit where Drake is named accuses him of helping to incite the crowd as the "surprise guest" alongside Scott, and that both of them stayed on stage as "the crowd became out of control," the suit says. CNN has reached out to Drake's representatives for comment.

CNN also has reached out to Scott, Live Nation and others named in the lawsuits but has not heard back.

NRG Stadium officials told CNN in a statement that they are unable to comment at this time.

Scott will pay for funerals and support therapy

On Monday, Scott's representative announced the rapper will cover all funeral costs for those who died at the festival.

"In addition, Travis has partnered with BetterHelp to supply free one-on-one online therapy, and is working closely with NAMI, MHA National, and MHA of Greater Houston (Mental Health America) to direct all those in need to proper mental health services," the representative said in a statement.

"Travis remains in active conversations with the city of Houston, law enforcement and local first responders to respectfully and appropriately connect with the individuals and families of those involved."

Free one-on-one sessions with a licensed therapist are available for those who sign up using a dedicated link -- www.betterhelp.com/cactusjackfoundation, the statement said.

All 8 victims have been identified

Those who died at the festival include two high school students and a man who tried to save his fiancée.

Rapper Roddy Ricch, one of the festival's performers, announced he will donate his share of concert proceeds to families of the victims.

"Please have the families of those we lost yesterday reach out to @shawnholiday. I'll be donating my net compensation to the families of this incident," Ricch posted on Instagram, sharing the hashtag "Pray4Houston."

Astroworld Festival organizers canceled Saturday's show after the surge and said in a statement, "Our hearts are with the Astroworld Festival family tonight -- especially those we lost and their loved ones. We are focused on supporting local officials however we can."