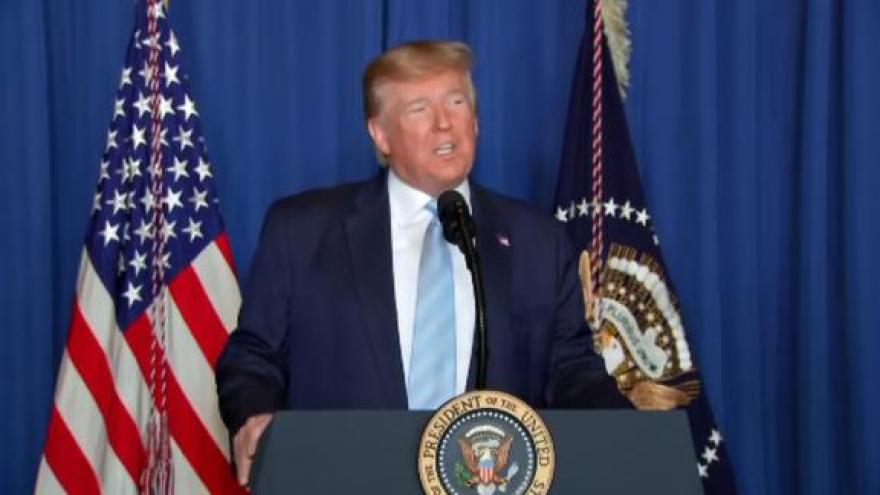 (CNN) -- One month before the Iowa caucuses kick off the Democratic primary, foreign policy is suddenly playing a central role in the wake of a rising crisis in the Middle East.

For the last year, the Democratic primary fight has largely been driven by a conversation on domestic matters, from the expansion of health care to college affordability and minimum wage.

But as the United States prepares to deploy more troops to the Middle East and Iran vows revenge for President Donald Trump's decision to order the strike that called killed top Iranian commander Qasem Soleimani, the instability of Iraq is suddenly front-and-center as the field of Democratic candidates start delivering their closing arguments to voters here.

It was the race's focal point Friday, when Sanders' and Biden's diverging approaches to foreign policy and Middle Eastern conflict were on display in speeches Friday at town halls in eastern Iowa following Soleimani's killing.

Both said they worried that the Trump administration had not thought through the consequences of killing a senior Iranian military figure. But Biden said Friday he has "no love lost" for Soleimani, while Sanders called the strike an "assassination."

Sanders also said Trump was listening to "right-wing extremists, some of whom were exactly the same people who got us into the war in Iraq in the first place," and said Trump's actions have caused a "dangerous escalation that brings us closer to another disastrous war in the Middle East."

Implicit in Sanders' criticism of Trump is a reminder that Biden, too, cast a vote that opened the door to war in Iraq.

What's not yet clear is whether that vote carries the political potency it did in each of the century's previous Democratic nominating contests.

For Biden -- the Democratic candidate who has been most eager to talk foreign policy during the 2020 race -- the renewed focus on conflict in the Middle East more broadly brings both significant political risks and opportunities.

It's a chance for the former vice president to underscore what separates him from his Democratic rivals: Decades of experience at the center of American foreign policy-making.

"The threat to American lives and interests in the region and around the world are enormous," Biden said of how Iran will respond. "The risk of nuclear proliferation is real, and the possibility of ISIS will regenerate in the region has increased, and the prospects of direct conflict with Iran is greater than it has ever been."

Biden has built his entire candidacy around decades of experience in Washington. As rivals escalate their questions about his judgment, the former vice president is making clear that he intends to lean into his record, saying the threats facing the United States underscore how "this is no time for on the job training."

He argues that he is uniquely prepared to quickly undo Trump's work and restore the world, and the United States' place in it, to what former President Barack Obama had left -- including a peace deal with Iran that had halted the country's nuclear ambitions.

In a fundraising email shortly after news of Soleimani's death had broken, Biden said Trump had "just tossed a stick of dynamite into a tinderbox," and that the country needs "strong, steady, experienced leadership."

Sanders, though, points to Biden's record on Iraq to argue the former vice president has also erred on foreign policy.

At most every campaign stop these days, Sanders reminds voters that he opposed the Iraq war, while pointing out that Biden voted in 2002 to give former President George W. Bush authorization to use military force in Iraq.

It's the same criticism Sanders has made of Biden repeatedly in debates, dating back to June. Largely ignored before, it's gotten more attention this time, as tensions in the Middle East rise again.

Biden declined to respond to Sanders' criticism of his foreign policy record and Iraq vote Friday.

"I don't respond to Bernie's ridiculous comments," Biden told reporters. Asked if he has questions about Sanders' judgment on foreign policy, Biden said, "You're not going to get me in a fight with Bernie. Bernie's got enough baggage."

In a speech at the National Motorcycle Museum in Anamosa on Friday, Sanders began by comparing the 2002 drumbeat to war with the new crisis in the Middle East.

"It gives me no pleasure to tell you that at this moment we face a similar crossroads fraught with danger," he said.

Lawrence Clausen, a retired speech pathologist from Muscatine, was sitting in the second row of the Black Pearl Café as Sanders held a town hall meeting Thursday. Clausen rose to his feet, asking Sanders how he would restore the global credibility of the United States.

Sanders began his answer by raising his vote against the Iraq war more than 15 years ago, which didn't sit well with Clausen.

"That's not a large issue for me anymore. I don't see that as a liability," Clausen said later in an interview after Sanders finished speaking. "What's happening now is the primary concern."

All presidential races are influenced by external events, but the Iraq war has played an influential role in the last three competitive Democratic primary contests, dashing the ambitions of several candidates.

In the early stages of the 2004 campaign, Howard Dean's opposition to the war propelled his candidacy, but John Kerry ultimately became the nominee. In 2008, Barack Obama used his opposition to the war as a point of distinction against Hillary Clinton, who also voted for it. In 2016, Sanders also frequently clashed with Clinton on the topic.

Yet it's an open question whether the Iraq war carries such political potency this year, as Democrats are eager to find a candidate who can defeat Trump.

"That was 15 years ago. This is a new challenge right now and I'm afraid for our country," said Marilyn Kettman of Belleview, Iowa, who came to see Biden on Friday in Dubuque.

She said she opposed the war, but believes Biden's old vote is irrelevant today, saying: "Trump scares me. We need to stop him."

Sanders isn't the only Democrat to point to the Iraq vote to question Biden's experience. Pete Buttigieg, the former mayor of South Bend, Indiana, who wields his military credentials in Bush-era wars, said the war was a "grave mistake" that destabilized the Middle East.

"I'm not here to say to my qualifications are a prerequisite, but I will say that they make me extremely aware of the consequences of decisions made in the White House Situation Room," Buttigieg said Friday in New Hampshire.

Massachusetts Sen. Elizabeth Warren, on Twitter on Friday, also characterized Soleimani's killing as an assassination, saying Trump has been "marching toward war with Iran since his first days in office."

"This is a moment for vigilance -- for Americans to speak up and speak out," she said. "No more Middle East wars."

As she campaigned in Iowa on Friday, Klobuchar did not dwell on the killing of Soleimani or the escalating Iraq crisis, but wondered whether the Trump administration had a strategy for what comes next.

"Did he think about what the repercussions of what this is going to mean?" Klobuchar said.

While not mentioning Biden's support for the Iraq war, Klobuchar made clear that she did not support the invasion. She did so by evoking the late Paul Wellstone, the Minnesota senator who helped inspire her entry into politics.

"He had taken a courageous vote against the Iraq war, which was my position as well," Klobuchar said. "It was not a good thing to do."