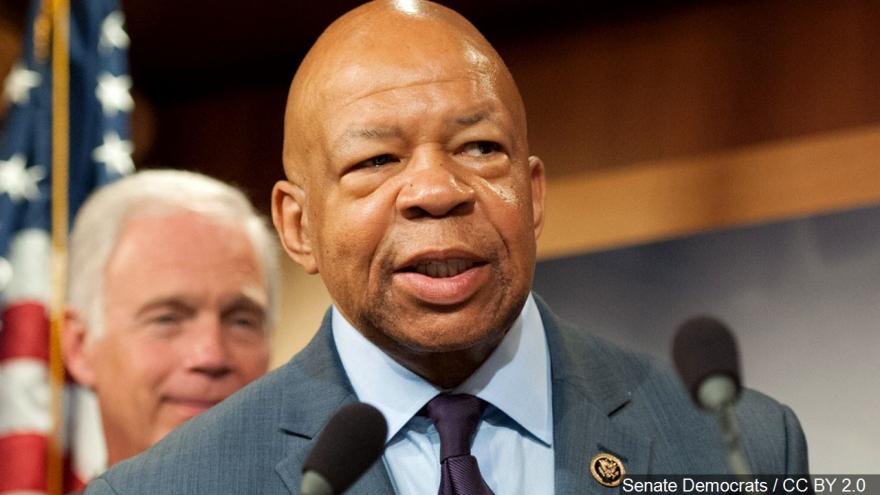 BALTIMORE (AP) — Maryland Rep. Elijah Cummings invited President Donald Trump and other Americans to visit Baltimore but declining to respond in kind to the barrage of presidential tweets and comments disparaging him and the majority-black city he has long represented.

"We are a great community," Cummings, the chairman of the powerful House Oversight committee investigating the administration, said in his first public remarks about the controversy as he participated in the midday opening of a small neighborhood park near his home.

Community leaders and residents gathered to cut the ribbon on a pocket of greenery and flowers, built from what had been a vacant lot often used as a dumping ground for trash.

Cummings said he doesn't have time for those who criticize the city where he grew up but wants to hear from people willing to help make the community better. He noted the outpouring of support he has received, thousands of emails, and the presence at the event of leaders from the University of Maryland's medical center, foundations and businesses. He wore a hat and polo shirt of Under Armour, the popular apparel maker headquartered in Baltimore.

Asked directly by reporters afterward if there would be a meeting with Trump, the congressman said he'd love to see Trump in the city.

"The president is welcome to our district," he said.

In a weeklong series of attacks, Trump called the Baltimore district a "rat and rodent infested mess" and complained about Cummings, whose district includes key parts of the city.

The president widened his attack on other cities he did not name but complained are run by Democrats. His comments were widely seen as a race-centered attack on big cities with minority populations.

Cummings' comments Saturday came at another pivotal juncture for the administration, as half of House Democrats now say they favor launching an impeachment inquiry against Trump. It's a threshold that pushes renewed focus on the issue, even though House Speaker Nancy Pelosi has declined to move ahead with proceedings unless there is a greater groundswell, including in public opinion.

Cummings, whose committee is one of the six House committees investigating the Trump administration, said Saturday he was not yet ready to support impeachment.

"There may well come a time when impeachment is appropriate," he told reporters. But for now, he said, he agrees with Pelosi's approach and said that his committee would continue its investigations. "I'm trying to be fair to him," he said. "That's why we need to do our research."

Under sunny skies, with a light breeze, the neighborhood situated in a historic part of West Baltimore offered another view of a city that struggled long before Trump's disparaging tweets, a once-gilded American seaport now confronted with other problems.

Leaders from the community spoke of the region's historic segregation in housing and how that legacy impacted neighborhoods.

Cummings recounted the city's famous residents, including the late Thurgood Marshall, a justice of the Supreme Court, and Ta-Nehisi Coates, a noted black scholar who testified recently in Congress on reparations for slavery. The congressman also gave a nod to his own family's history, his parents arriving from a Southern state, to build a better life for their children, and his ascent from the community to law school and the halls of Congress for two decades.

To residents, especially young people, he said, "Let no one define you."

Residents said they were heartened by the attention being paid to Baltimore, and they too urged the White House to consider the way the president's comments may land in a community.

Jackie Cornish, a founder of the Druid Heights community development corporation more than 40 years ago, said she hoped Trump and Cummings could put their collective power together and work for the good of the city. While she feels the president has "disrespected our congressman as well as disrespected our city," she also said: "We still respect our president. As long as he's president, we're trying to lift him up."

Amos Gaskins, who lives across the street from the park and stepped out to greet Cummings, said the congressman has been through "a lot" and added, "He's doing a great job, a beautiful job."

"We're not what you call a dirty city and a dirty people," Gaskins said. "Donald Trump shouldn't have said that. That's uncalled for."