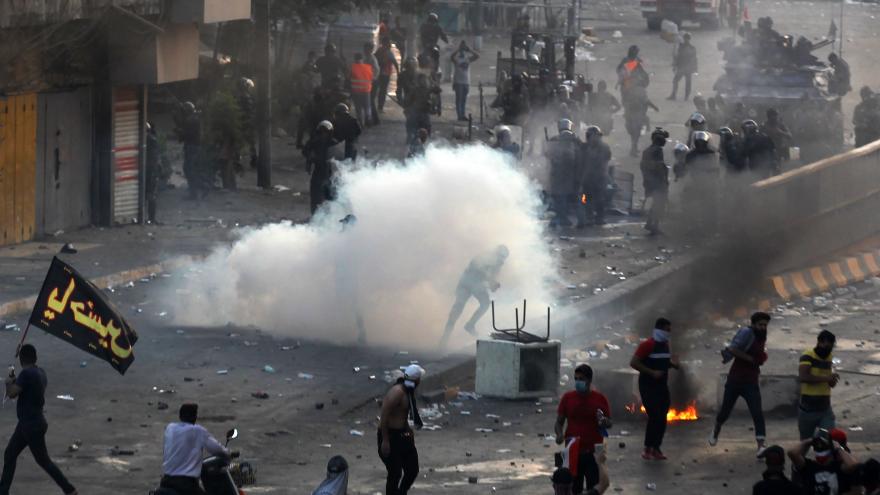 (CNN) -- Curfews and internet blockages have been imposed in parts of Iraq, as officials react to mass protests against unemployment, government corruption and lack of basic services.

In multiple cities, clashes between protestors and security forces have turned violent. At least eight people have died and more than 300 left injured this week, said Ali Akram al-Bayati, a member of the Independent High Commission for Human Rights of Iraq, to CNN.

He said two protestors died in Baghdad, four died in Nasiriya and two died in Maysan province, while 50 members of the Iraqi security forces were among the injured.

On Wednesday, authorities ordered curfews in the capital of Baghdad, and in the southern city of Nasriya. Internet access was also cut across much of the country, according to internet monitoring service Netblocks.

Before announcing the curfew in Baghdad, Iraqi Prime Minister Adil Abdul-Mahdi held an emergency meeting with members of the national security council to discuss the "unfortunate events," according to a statement released by his office Wednesday.

"The Council stressed that appropriate measures should be taken to protect citizens and public and private properties," the statement said, adding that the government will make all efforts "to meet the legitimate demands of the demonstrators."

On Wednesday, hundreds of angry protesters had stormed the governors' offices in the cities of Najaf and Nasiriya, according to an Iraqiya State-run television report, setting fire to parts of the buildings in the two predominantly Shiite cities.

Iraq's Defense Minister has ordered the country's armed forces to be on high alert, in order to protect government buildings, including embassies and diplomatic missions, and has deployed extra security troops to Baghdad International Airport.

Amnesty International also urged Iraqi authorities to carry out an urgent and independent investigation into the "excessive violence" used against demonstrators.

"Under domestic and international law, authorities are obliged to respect right to peaceful assembly. In event of violence, excessive violence should not be used," the statement read.