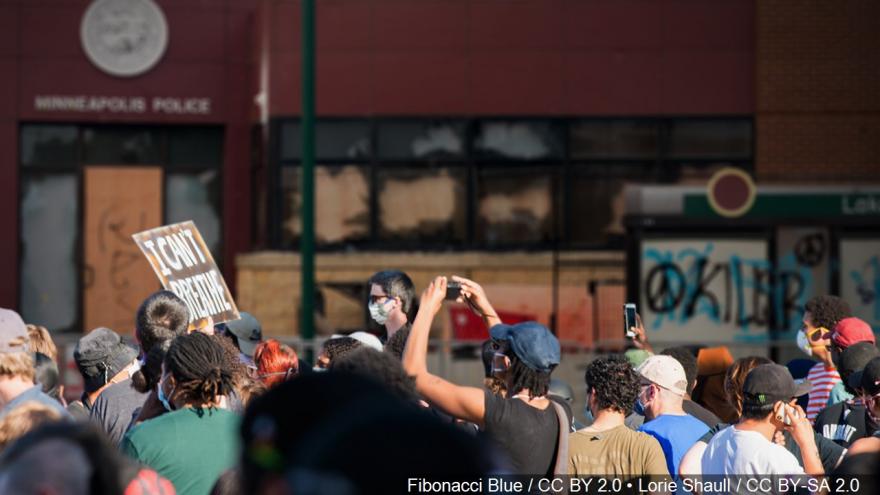 (CNN) -- A wave of protests over the death of George Floyd spread from coast to coast on Saturday, leading authorities to enact curfews in major cities and brace for violent standoffs after dusk.

"We need you to stay home tonight to be able to respond to those who are trying to loot and burn our city," Minneapolis Mayor Jacob Frey tweeted Saturday night about the fifth day of unrest.

At least six major cities have imposed curfews and numerous states have either activated or requested National Guard forces in anticipation of another night of protests, sparked in part by the death of Floyd -- who was unarmed and handcuffed -- while in Minneapolis police custody.

The former officer seen in a video kneeling on Floyd's neck was in custody Saturday and is facing charges in his death.

Protesters were blocking highways Austin. Cars were set on fire in Los Angeles, Seattle and Miami. Nearly 100 people had already been arrested in New York City and Philadelphia. In Washington, DC, near the White House, several Secret Service vehicles were damaged.

• City curfews: A curfew will be in effect in Atlanta from 9 p.m. ET through sunrise Sunday. Philadelphia will institute a curfew from 8 p.m. to 6 a.m.Denver instituted a citywide curfew beginning Saturday at 8 p.m. MT to 5 a.m.that will remain in effect through Monday. Milwaukee imposed a curfew Saturday night beginning at 9 p.m. CT and Cincinnati announced a curfew from 10 p.m. ET to 6 a.m. this weekend.

• National Guard: At least six states and the District of Columbia have either activated or requested assistance from the National Guard, including Minnesota, Georgia, Ohio, Colorado, Denver and Kentucky.

• 21-year-old shot: A young man was killed Friday night in downtown Detroit where protests were taking place. Police had previously said the victim was 19 and that they could not confirm whether the victim was part of the protests.

• Clashes and arrests: More than 500 people were arrested in Friday night's protests in Los Angeles, police said. New York City police have made more than 200 arrests connected to protests, and more than a dozen officers have been seriously hurt, according to a senior NYPD source. In Houston, nearly 200 people were arrested and most will be charged with obstructing a roadway, police said.

State and local authorities said the violence in Minneapolis was being fueled by outsiders.

"Nothing we do to provide justice" for Floyd "matter(s) to any of these people who are out here firing upon the National Guard, burning" businesses and "disrupting civil life," Minnesota Gov. Tim Walz told reporters on Saturday.

The governor said he understands that "Minnesotans' ... inability to deal with inequality" and racism was the catalyst for the protests -- but he said rough estimates indicate only 20% of protesters there are Minnesotans.

St. Paul Mayor Melvin Carter said everyone arrested in hist city on Friday night was from out of state.

Assertions about outside agitators come partly from arrest data as well as information from fliers and online postings, said John Harrington, the state public safety commissioner, adding that authorities had "seen things like white supremacists organizers" who had posted online about going to Minnesota.

Officials did not provide further details about who exactly was fueling the unrest and where they were from. Harrington said he hoped to release more information later Saturday.

US Attorney General William Barr said the "voices of peaceful protest are being hijacked by violent radical elements" pursuing "their own separate and violent agenda."

Vandalism in Los Angeles and Chicago

Protests were underway by late Saturday afternoon in cities like Chicago, Baltimore, Los Angeles and Washington, DC, where several Secret Service vehicles were vandalized with graffiti outside the White House.

A demonstration in Los Angeles led to clashes between police and protesters. Police vehicles were vandalized in Los Angeles by some protesters who kicked in the windows or sprayed the cars with graffiti. Police fired rubber bullets at demonstrators, who chanted "Black Lives Matter" and "George Floyd."

Aerial footage from CNN affiliate WLS showed protesters in Chicago vandalizing police vehicles. Some threw water bottles at police officers in riot gear, while others were seen lifting police barricades and throwing them at police cars.

Meantime, Philadelphia police said protests at City Hall and the Art Museum began peacefully before a group of others began "committing criminal acts, including vandalism."

In Atlanta, police braced for more potential protests and arrests Saturday night. The Atlanta Police Department said it would be assisted by about 20 other agencies to monitor activity and protect businesses.

Protests turned deadly in some cities

A nation cooped up for weeks over coronavirus restrictions and suffering from resulting job losses now sees throngs of people demonstrating in streets, unleashing powerful emotion in part over the recent deaths of Floyd and other unarmed black Americans.

Anger boiled over Friday in more than 30 cities, with some protesters smashing windows, setting vehicles ablaze, blocking traffic on highways and clashing with police.

Though protesters called out similar chants for justice, the demonstrations played out differently in each city.

In Minneapolis, the epicenter of the demonstrations, some protesters knelt under a bridge and prayed. Others tossed rocks at officers who fired rubber bullets in return. Officers stood on top of a precinct armed with nonlethal deterrents as a man in the crowd of protesters tried to climb the gate. When fires moved from the precinct to dumpsters and residential streets, more than 350 troops were deployed to control the groups.

Minneapolis and St. Paul were under a curfew after looting and arson broke out during days of protests. But hundreds took to the streets as police fired tear gas and protesters hid behind cars.

At a protest in Detroit, one person was shot dead. And in Springfield, Massachusetts, hundreds gathered peacefully.

"If you can tell me something better for me to do -- if you can tell me a way that we could change the world without trying to make noise like that, then I'll get out of the streets," Max Bailey, 22, said at the protests in Denver.

In Oakland, California, one Federal Protective Service officer was killed and one other injured Friday in a shooting at the downtown federal building during protests in the city, police said. Details about what led to the shooting weren't immediately available.

"It's about time this police brutality has to stop. I don't agree with breaking into all of the businesses, but I can understand the outrage after REPEATED incidents," Mackenzie Slagle said of protests in Oakland. "Because I'm a white woman, and I needed to show up for all my brothers and sisters."

In Atlanta, a day of protests began peacefully but turned violent when a crowd set fire to a police car and smashed windows at CNN Center.

"What I see happening on the streets of Atlanta is not Atlanta. This is not a protest. This is not in the spirit of Martin Luther King Jr. This is chaos," Atlanta Mayor Keisha Lance Bottoms said.

"Killer" was scrawled across a damaged police car in Los Angeles where protesters lined up along a freeway to block traffic. At least two officers were injured during the night, said the LAPD.

In Washington, the White House was briefly locked down Friday as protesters moved toward it. Protesters overnight confronted officers, including those from the Secret Service, throwing bottles at them, removing metal barriers and pushing against officers' riot shields. Officers responded at least once by spraying pepper spray.

Bail is set for the officer arrested

The bail for Derek Chauvin, the former officer charged Friday with third-degree murder and second-degree manslaughter, was set at $500,000.

Chauvin, who is white, and three other officers detained Floyd, who was black, in handcuffs Monday after he allegedly used a counterfeit bill at a convenience store. Outrage grew after a video surfaced showing Chauvin kneeling on Floyd's neck.

Chauvin had his knee on Floyd's neck for a total of 8 minutes, 46 seconds, according to a criminal complaint filed Friday. Charges against the other three officers are likely, authorities said. All four officers were fired this week after Floyd's death.

Floyd's family is upsetthat Chauvinwasn't charged with a more serious offense, like first-degree murder, their attorney Benjamin Crump said. "And we want to see the other officers arrested," the family said in a statement.

New video posted on social media appears to show three Minneapolis police officers -- not just Chauvin -- kneeling on Floyd during his arrest. CNN has not been able to locate the person who shot the footage. The new video shows the other side of the Minneapolis police vehicle -- the side opposite shown in the first video.

"I can't breathe, man," Floyd can be heard saying in the new video. "Please, let me stand. Please, man."

Minneapolis police had said Floyd, 46, "physically resisted" the officers. Surveillance footage from a nearby restaurant does not appear to support the claim that he resisted arrest during the initial encounter. However, there are several minutes when Floyd's and the officers' interactions cannot be seen from that camera's vantage point.

A preliminary autopsy said the combined effects of Floyd being restrained, potential intoxicants in his system and underlying health issues, including heart disease, contributed to his death.

It said there was no physical findings to support strangulation as the cause of death.

The absence of physical evidence doesn't necessarily mean Floyd didn't die from asphyxiation, CNN Chief Medical Correspondent Dr. Sanjay Gupta cautioned. Gupta also said an officer should have started CPR after one of them told the others he couldn't find a pulse.

CNN has reached out to the former officer's attorney and the Minneapolis police union for comment.