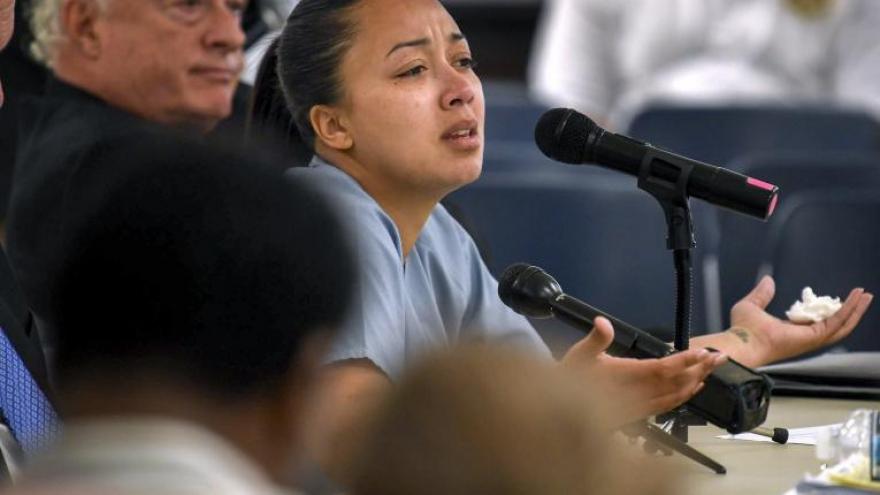 Cyntoia Denise Brown, a woman serving a life sentence for killing a man who bought her for sex when she was 16 years old, has been granted clemency, the Tennessee governor's office said Monday.

(CNN) -- Cyntoia Denise Brown, a woman serving a life sentence for killing a man who bought her for sex when she was 16 years old, has been granted clemency, the Tennessee governor's office said Monday.

Brown, 30, will be released to parole supervision on August 7 after serving 15 years in prison, Republican Gov. Bill Haslam's office said in a statement.

"This decision comes after careful consideration of what is a tragic and complex case," Haslam said.

"Cyntoia Brown committed, by her own admission, a horrific crime at the age of 16. Yet, imposing a life sentence on a juvenile that would require her to serve at least 51 years before even being eligible for parole consideration is too harsh, especially in light of the extraordinary steps Ms. Brown has taken to rebuild her life. Transformation should be accompanied by hope."

Brown's case drew the attention of several high-profile advocates including a US congressman, several Tennessee lawmakers and a number of A-List celebrities. Comedian Amy Schumer, reality star Kim Kardashian West and actress Ashley Judd were among those who called for Brown's clemency.

In 2004, Brown killed Johnny Mitchell Allen, who Brown said had solicited her for sex and taken her back to his house.

Prosecutors at the time said Brown shot Allen in the head while he was sleeping, stole money and guns, took his truck, and fled the scene. They argued the killing wasn't motivated by self-defense, but robbery.

Brown said she was scared for her life by Allen's behavior, and took money for fear of returning empty-handed to her pimp, nicknamed "Cut Throat."

A juvenile court found Brown competent to be tried as an adult. She was convicted of murder and robbery, and sentenced to life in prison.

Though more than a decade had passed since her trial, the harsh punishment for a teenage victim of sex trafficking sparked outrage around the US -- particularly after celebrities Rihanna and Kardashian West came to her defense on social media in 2017.

Since Brown's conviction, juvenile sentencing guidelines in Tennessee have been amended:

"If Cyntoia Brown were tried today, legal experts say she would not have been tried in the same way," said CNN affiliate WZTV anchor Stacy Case, who had been investigating reports of sex trafficking in Tennessee when she came across Brown's story.

"Our courts today would view her as a child sex slave... she would be viewed as a victim."

In fact, it was Brown's trial that inspired a documentary that eventually helped to alter the way Tennessee deals with sex trafficking victims, particularly those who are juveniles.

"If you look at Cyntoia's original transcripts, they are peppered with the phrase 'teen prostitute,'" says Derri Smith, founder and CEO of non-profit End Slavery Tennessee.

"Well we know today there's no such thing as a teen prostitute ... because this teen may think that she decided this was her idea to be raped multiple times a day and give money to someone else, it's pretty clear there's an adult behind that who's manipulating and exploiting her."

In the 2011 documentary "Me Facing Life: Cyntoia's Story," Brown describes being forced into prostitution at a young age, sex-trafficked and raped repeatedly.

"The first time he did something to me is when he choked me and I passed out," Brown recounts of her alleged pimp in the documentary. "I made him money...he wasn't going to let me go nowhere. He told me he'd kill me."

The documentary by Daniel H. Birman Productions, Inc. also revealed new evidence that suggests Brown suffered from Fetal Alcohol Syndrome, which can cause brain damage -- evidence that the jury which convicted her in 2004 never saw. Her mother also admitted to drinking heavily while pregnant, according to court records from a 2014 appeal.

"Then as a teenager, she did have a nice adoptive family," Case said. "But because of her experiences she veered and ended up on the wrong side of law -- and ended up being sex-trafficked. If she had grown up differently, if she had had other opportunities, it may not have ended up that way."

A second installment of the documentary is scheduled for release this year.

Fighting for a second chance

Since her sentencing, Brown has spent all of her adulthood in prison -- but her advocates say she has worked to transform herself during her time behind bars.

"She is light years today, as a woman, different from the traumatized 16-year-old that she was," Smith says. "She's mentoring... troubled youth, working on her college degree, she is planning a nonprofit so she can help other young people."

Brown received her associate's degree from Lipscomb University in 2015, and, according to Smith, has been working toward her Bachelor's degree while in prison. She's also collaborating with Tennessee's Juvenile Justice System to help counsel young people at risk, and her supporters say she's been a model inmate during her incarceration.

"I learned that my life was -- and is -- not over," Brown said over the phone in a clip titled "Prison Reflections" from the documentary filmmakers. "I can create opportunities where I can actually help people."