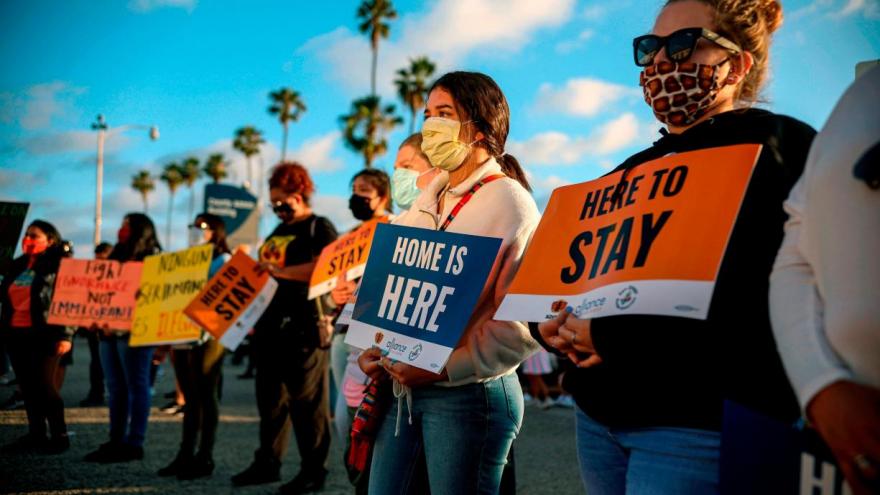 Participants in the Obama-era program shielding undocumented immigrants who came to the US as children from deportation are challenging the Trump administration's latest effort to limit the program, the first targeted challenge against the full set of new rules.

(CNN) -- Participants in the Obama-era program shielding undocumented immigrants who came to the US as children from deportation are challenging the Trump administration's latest effort to limit the program, the first targeted challenge against the full set of new rules.

Earlier this summer, the Supreme Court blocked President Donald Trump's attempt to end the Deferred Action for Childhood Arrivals, a program established in 2012 that protects certain undocumented immigrants and allows them to work in the US.

More than a month after the ruling, acting Homeland Security Secretary Chad Wolf announced the program would limit renewals to one year instead of two and still not accept new applicants. Immigrant advocates, lawyers and lawmakers denounced the move, criticizing the delay and arguing the move ran afoul of the Supreme Court's order.

In an amended complaint Friday, DACA beneficiaries and Make the Road New York, an immigrant advocacy organization, raised these points, calling the latest directive "cruel, heartless, and unlawful," and urging the court to block the administration's effort to gut the program.

"In the weeks that followed, Defendants sowed confusion among the more than one million individuals impacted by the Supreme Court's decision, first by denouncing the decision as having 'no basis in law' and then by refusing to abide by its directive to return to the status quo ante," reads the complaint, which was filed in an ongoing DACA case in the US District Court for the Eastern District of New York.

"Less than six weeks after the Supreme Court ruling, Defendants compounded the harm by issuing a new memorandum dismantling the DACA program, thereby prolonging the daily uncertainty faced by those who have, or are eligible for, DACA. This latest assault on DACA is no less unlawful than the first," it continues.

Wolf's memo was the third the administration has issued in an attempt to rescind the program, though Wolf stopped short of terminating it altogether for now.

"I have concluded that the DACA policy, at a minimum, presents serious policy concerns that may warrant its full rescission," Wolf wrote, adding that the onus remains on Congress to act.

Trump has repeatedly railed against DACA as part of his anti-immigration agenda but three years into his administration has been unable to end the program as promised following a series of lawsuits. The latest lawsuit, and expected future challenges, is likely to present another obstacle.

Plaintiffs in the case also take issue with the appointment of Wolf, who they argue was "improperly designated as Acting DHS Secretary and thus lacked the authority to issue the Wolf Memorandum."

A government watchdog report similarly found that Wolf's appointment was invalid. Trump has since announced the nomination of Wolf to serve as Homeland Security secretary.