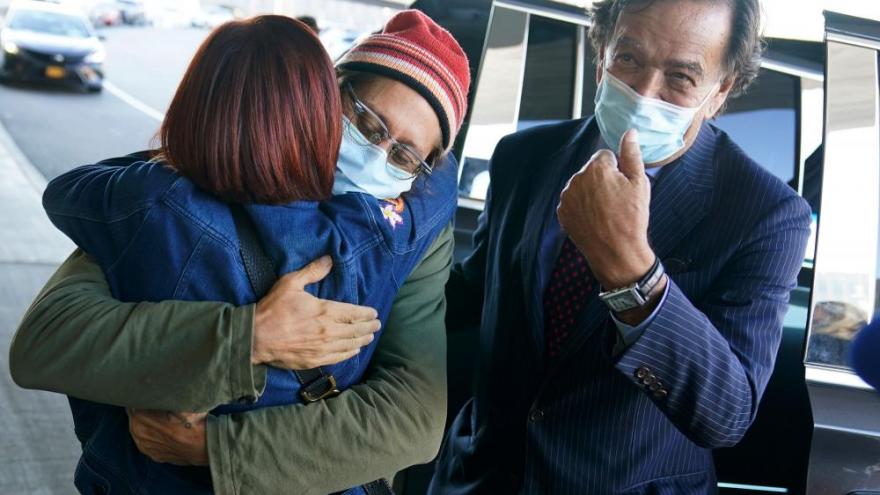 American journalist Danny Fenster arrived in the United States on Tuesday after almost six months in a Myanmar prison and expressed thanks to everyone involved in securing his release.

(CNN) -- American journalist Danny Fenster arrived in the United States on Tuesday after almost six months in a Myanmar prison and expressed thanks to everyone involved in securing his release.

"I just have so much gratitude right now for everything everyone's done. I think every, every action everyone's taken, it's helped a little bit," Fenster said Tuesday in his first public remarks since his release this week into the custody of Bill Richardson, the former New Mexico governor and former US ambassador to the United Nations who now works to help US detainees overseas.

Bearded, wearing a red ski cap and an olive-green jacket, 37-year-old Fenster said seeing Richardson and his team waiting for him at the airport tarmac was the "greatest, greatest feeling I can ever remember having."

The managing editor of Frontier Myanmar, Fenster was arrested in May, months after a military coup and a harsh military crackdown had thrown the country into violent chaos.

He was sentenced on Friday to 11 years in prison for spreading information that could harm the military, for associating with opponents of the regime and for violating immigration laws. He faced the potential of an even longer, additional sentence.

On Monday, just days after that sentencing, the Richardson Center announced on Twitter that Fenster had been released "following a private humanitarian visit by Governor Richardson to Myanmar and face-to-face negotiations with General Min Aung Hlaing, Myanmar's Commander in Chief."

Speaking to reporters at a news conference upon landing in New York, Richardson recounted, "the best moment ... was at the airport in Myanmar and seeing Danny walk towards me with all these security people around him. And I said to him, 'Danny, I'm taking you home and taking you back to the United States today. Today.' He said, 'Great.' "

Richardson and Fenster were joined at the news conference, which was held at the TWA Hotel at John F. Kennedy Aiport, by US Special Envoy for Hostage Affairs (SPEHA) Roger Carstens, Rep. Andy Levin, Joel Simon of the Committee to Protect Journalists, former US Ambassador Cameron Hume and the Richardson Center's Steve Ross and Mickey Bergman.

The speakers all expressed immense gratitude that Fenster was freed, emphasizing that his release was the effort of many groups.

"Different organizations, I think you all share the same interests but work within different constraints," Fenster said. "Everything that everybody was able to do within their mandates, this time it worked."

"Sometimes it takes an unconventional approach and it can't be the government, so the governor, to the governor I want to say a huge thanks for getting this win," he said.

Levin, a Democrat from Detroit who represents Fenster, praised Richardson, Secretary of State Antony Blinken and State Department staff, as well as US Ambassador Thomas Vajda and the staff at the embassy in Rangoon who "have unfailingly worked to get Danny out."

"This is just an awesome day," he said.

Levin also thanked a list of countries that helped the US in its efforts to get Fenster released, naming Japan, Singapore, Thailand, China, Israel, Qatar, Sri Lanka, India and countries belonging to the Association of Southeast Asian Nations. Bergman gave special thanks to the governments of Qatar and Norway.

Carstens, who has served as SPEHA under the Trump and Biden administrations, praised Fenster's family for running "the most incredible campaign" and added that "when this is all said and done, I'm going to come out (to) your house. We're gonna do an after-action review, because the things that you did to elevate Danny's case, that's the kind of thing that other families need to learn from and we want to make sure we propagate those lessons learned."

Fenster noted that during his time in prison, he had some sense of the efforts of his family was undertaking to spread awareness about his situation through occasional tidbits of news from the outside world

"To my family, I was able to get little, little hints of what was going on occasionally throughout the experience," Fenster recalled.

"I was outside of the prison in court, maybe some police aide that could speak a little bit of English, would flash a picture on his phone of my entire family wearing T-shirts with my face on it on CNN, which was a pretty, pretty bizarre thing to see, sitting in a court room," he said.

"So I was aware and I know my brother, I know what he's capable of and how he works," Fenster added.

Fenster acknowledged the support his case has received from around the country. "I spent the last 15 hours on the flight just looking at coverage across the country in these places that I've lived and seeing people sort of remembering me and pulling together and it's incredible," Fenster said.

Fenster said he would "take time to celebrate" and spend time with his family, and then "continue concentrating on all the other not just journalists and prisoners of conscience in Myanmar and everywhere else."

"A lot of citizens, doctors, teachers that are in prison right now. And you know, that's another point that everybody here is reiterating this is, this will be a short little celebration, but let's keep focused on what the actual story is here," he said.

His release is just one victory in an ongoing battle to free Americans held hostage and unlawfully detained overseas.

Bergman, the executive director of the Richardson Center, spoke of the "nearly 50 Americans wrongly detained currently around the world." The Foley Foundation, which also works on hostage and detainee issues, says there are more than 60 publicly known cases.

"We need to do everything we can to bring them back," Bergman said. "Their families are in an impossible and unbearable situation that the Fenster family knows all about."